XP Internet Security 2013 has blocked a program from accessing the internet? Yes, XP Internet Security firewall alert is a rogue anti-virus application. Like what we said before, it is designed to look like a legitimate security program but it certainly is not one. It pretends to work like a genuine anti-virus application and would even produce system scans and virus detected alert notifications. However, all the system scans and notifications are faked and the rogue application aims to deceive the PC user into thinking that their computer has been infected with several viruses.

XP Internet Security 2013 is listed as a Baravaix virus along with several other fake security applications. The applications sneak into the system and begin to compromise the performance of the computer. It would then prevent several programs from running properly and would initiate fake system scans and alert notifications when you try to run some programs.

XP Internet Security 2013 virus should be removed from the system immediately it is noticed. Hackers use these fake security applications to study the PC user’s keystrokes and browsing history so as to steal personal information. The fake anti-virus is also used to deceive people into believing that their computer has been affected with viruses. It would keep popping out alert notifications to make the user of the computer try to clean the system using the application. When he tries to do that he would then be asked to first pay for a licensed version. But it is a scam and fake antivirus that disabled the task manger and registry editor, since no anti-virus can deal with this fake AV. Just get it off of your computer manually. 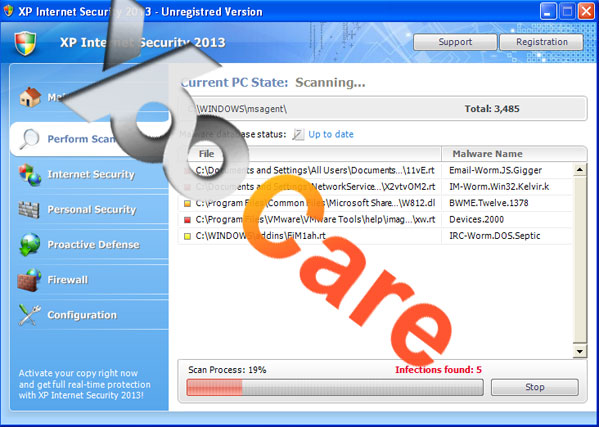 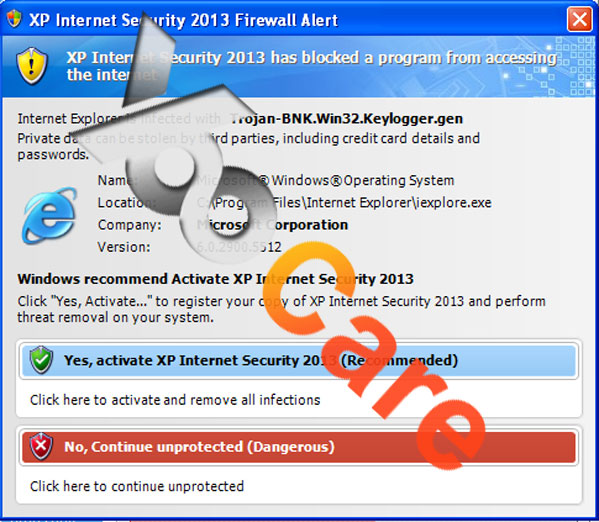 How XP Internet Security Virus Firewall Alert Gets On Your Computer?

XP Internet Security 2013 virus gets into the computer system without the knowledge of the computer owner. It gets in along with a Trojan that is usually packed inside any downloadable content online such as video codec, spam email attachments, shareware, software updates and shareware.

Once on the system it would begin to adjust the registry settings and values. The application will be programmed to activate when next the computer reboots. Once it becomes active it would begin to disrupt some programs from running or opening properly. It would also begin to prompt fake notifications and threat alerts to scare the PC user into paying for the fake licensed version.

4. Search for all related registry entries infected by this fake antivirus virus and wipe them out:

To remove XP Internet Security 2013 virus from your computer you would need to follow the guide above step by step, this is the only effective way as there is not a perfect anti-virus program or a special tool that is capable. Take note that your regular anti-virus may not be effective because the fake application would have distorted the computer system’s registry. You would need to make the computer run on safe mode before using the antivirus tool to scan the computer and completely root out the malicious program. If you can erase the rogue program that is fine. Anyway, if you have problems with the fake antivirus, the best and easiest way to save your computer is to consult with an expert for instant assistance.

Note: If you are not computer wiz and don’t know how to get rid of XP Internet Security 2013 Virus Firewall Alert, to save your computer in time, please contact YooCare PC experts 24/7 online to completely and safely figure it out.