I fell into the trap of  XP Home Security 2013 Firewall Alert. I didn’t know that was a malware virus. When I downloaded Flashget, it also let me install the malware. I was innocent and I didn’t know anything about this stuff so I clicked install. The bad thing is that I can’t uninstall or remove it from my computer now. It controlled my PC and I can’t do anything. Can I remove it permanently?

XP Home Security 2013 Firewall Alert has a shiny name telling you that it is a legitimate anti-virus, doesn’t it? However, it plays an opposite role as a virus. It’s a fake anti-virus which can not really provide any protection to your PC but only can swindle your money and hijack your computer in a bad condition. It has a very charming interface looks like very similar to those famous anti-virus programs. With this appearance, it can easily cheat more people. You may come across this fake thing on some advertisement pages or when you download some unknown free software, Home Security 2013 Firewall Alert will also be attached to you. You are very likely to install this fake anti-virus when you install the free software at the same time. In a word, this fake program will try every means to access your PC so that it can implement it’s cheating plan.

Like many other fake programs, XP Home Security 2013 Firewall Alert will modify the startup of your PC system like other fake things so that it can start automatically once Windows has been started. Then this rogue software will block all the legitimate antivirus in your computer. It will replace them as if it’s the best program. After that, this stuff will starts its “scanning” as if it works for you. Then it will report you that your computer is in very dangerous condition and it will list many fatal errors and virus warning to convince you that your computer need to kill virus or be repaired. But all these errors or viruses are even not in your computer. The only purpose is to cheat you to purchase its so called “full version”. Please never pay this useless stuff money. It can’t give your computer any protection except damage. 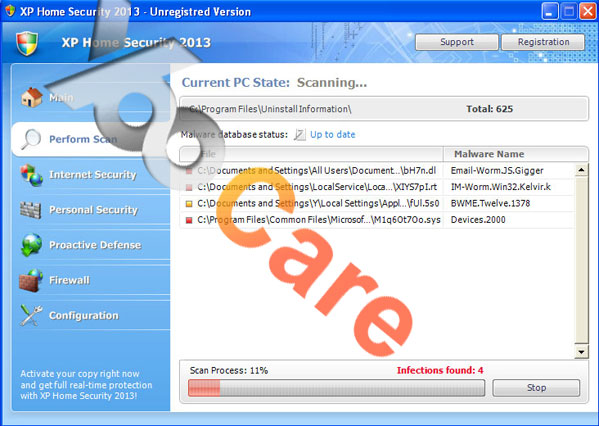 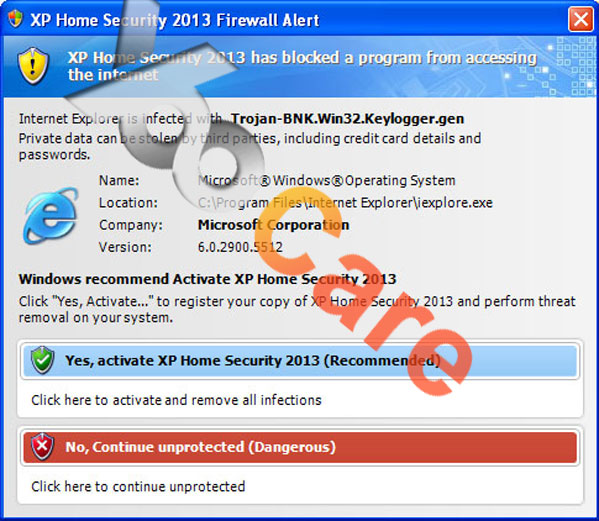 A. Your formal anti-virus programs will be replaced by Security 2013 Firewall Alert.

Step 3: Press Ctrl+Alt+Del keys to open the Task manager to stop the progress of XP Home Security 2013 Firewall Alert Virus. Because the name will be changed fast, it will be displayed with different names with random letters.

Kindly remind: Don’t think that this notorious XP Home Security 2013 Firewall Alert Virus will leave your computer as time goes by. And be aware that this fake malware cannot even provide your PC any protection. What it can give to you is only harm and damage. Don’t waste even a penny on it. When you realize what it is one day, you will be very remorseful. Never believe those so called free software! Don’t download to install those stuffs in your computer. They can not remove the XP and Win7 Home Security 2013 Firewall Alert Virus for you, but bring you much more other virus such as ransomware, scam virus even fake things. You may not be aware that those so called free software can be another cheater, which will make you gain just more loss. Please don’t take a chance to have a try. It’s nonsense. There is no free lunch! If you really can’t remove it yourself, please find an expert for assistance. This is the best choice.

Anyway: to contact an expert such as YooCare/YooSecurity for professional service will make you at ease if you really don’t know how to remove the malware fake virus: