Computer blocked by Arestocrat Virus? I believe my computer was infected with Arestocrat Virus(the one with a white full screen that appears nothing but a writing box and a submit button and if you attempt to write it tells you you have 48 hours to pay). It blocked my entire screen with a window telling me to pay hundreds of dollars to release my computer. Is it a scam? I am unable to run any of security tools on my computer because of the lock screen application. How do I remove Arestocrat Virus? Any help will be appreciated.

How to Remove Arestocrat Virus? Is It A Scam?

Arestocrat Virus is one of the latest computer locked viruses that is associated with the malicious Ransomware called Department of Justice Virus (also called DOJ Virus). It will be installed silently when you visit infected website or click malicious advertisements. Nowadays, Ransomware starts to spread over the Internet and most Ransomware parasites get installed by other threats like worms or trojans. They get into the system without user’s knowledge and consent and affect everyone who uses a compromised computer. Once it is downloaded, Arestocrat virus blocks users from accessing their desktop by displaying a fake notification all over their screen. The notification delivered by Arestocrat virus is supposed to push users into paying a fine within a certain period of time such as 48 hours or 72 hours. However, every notification or alert of this virus must be ignored no matter how convincing they might seem to be. It is a scam and users should never be fooled by that.

There are a great number of Ransomware parasites such as FBI Virus, RCMP Virus and AFP Virus etc. working with the same way to lock one’s computer and cheat innocent users. And Arestocrat Virus can be the newer version that also designed to bamboozle innocent users into spending money to unlock the PC before they realize that the warning is fake. It claims that the user has been visiting websites containing pornography, child pornography and other illegal videos. To further threaten users, it also says they’re being watched by the FBI or others and in order to unlock the computer, victims have to get a $300 moneypak in order to unlock computer before it’s reported to the FBI. As soon as you see Arestocrat Virus pops up on the screen, please don’t be panic. All of these warning messages are just the work of computer hackers, who use these threatening messages as a way to extort money from computer users. It is not real. Besides, it is important to understand that the FBI, Department of Justice or other organizations would never lock a user’s computer and demand a fine be paid via Moneypak through the computer, as these viruses do.

The criminals behind this virus create such tricky virus in order to earn as much money as they can from those unwary users. When Arestocrat virus comes inside, it blocks you from accessing desktop, task manager etc, also it can disable your antivirus program and protect itself from being removed. Thus, it can stay in the root of the computer system and continue to make chaos on the compromised PC. Considering Arestocrat virus is a malware that harm the computer, it is suggested users to get rid of Arestocrat virus as quickly as possible.

Arestocrat Virus locks users out of their computers and then displays fake messages that were supposedly sent by the local law enforcement authorities: 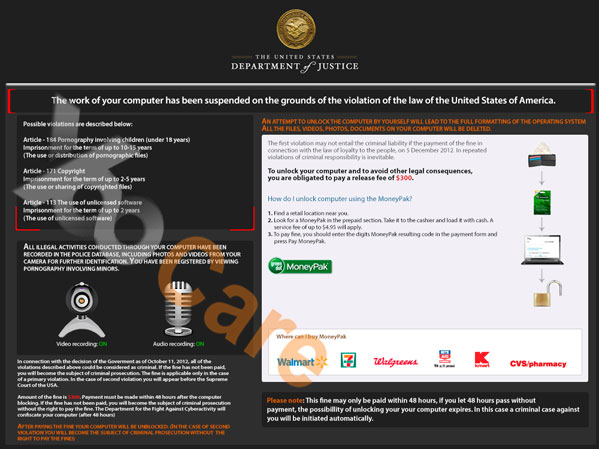 How Does Victims Describe Arestocrat Virus After Computer Is Infected?

# My computer is infected with Arestocrat Virus and I’m running windows 8. When I boot in safe mode to try to reset the computer to a previous date, it won’t allow me to do so.
I can’t run any anti-virus/malware programs as my computer screen is totally blocked. What should I do now?
# Hey, I believe I have the Arestocrat virus! When i get on my computer this thing pops up and says if I don’t pay a certain amount of money im going to get arrested or something like that. I just really want to get rid of this thing, please help!
# Hello, upon starting my computer I get a lock screen from the department of justice asking for money to unlock my computer. The program is called arestocrat. I am unable to run any of the normal malware procedures on my computer because of the lock screen application. I am running a windows 7 laptop. Any help with this issue would be greatly appreciated. Thanks!

The installation process is very fast, and the Arestocrat Virus will quickly change the system settings to not only lock the computer down, but also it will also block and legit anti-virus and anti-spyware programs that are installed on the computer. It will disable many functions and set it so that the warning message will immediately be displayed when the PC is started. There is no way to minimize the window or even access another Internet browser. We suggest this be done manually to make sure that the virus is gone completely then recover all your files safely, and you can review the detailed steps below to initiate the manual removal of the Arestocrat Virus.

Before all you people who are going to get in safe mode with networking or safe mode with command prompt, you need to keep hitting F8 key, where is the key?(This is just for Windows XP, Windows Vista and Windows 7, if the OS is Windows 8, click here for more details)

Step B: Press Ctrl+Alt+Del keys to open the Task manager to stop the progress of Arestocrat Virus Malware. Because the name will be changed fast, it will be show with different name.

The Arestocrat Virus doesn’t attempt to destroy the computer system like many of the other viruses. The hackers have just one goal with this virus, and that is to infect as many computers as possible in an attempt to get a large percentage to send them the money.

When Arestocrat Virus is installed on the computer it will lock all functions of the computer and display a notice that will not minimize or close. Even if you have installed antivirus program on the computer, you still cannot escape the Arestocrat virus attack because it can disable all the security tools. This virus starts showing its fake message just after a few seconds when user open the PC on and login Windows. Some victims have also reported about a window that says “Arestocrat” on the computer screen that cannot get rid of. Undoubtedly, this is a deadly threat and in order to unblock your PC, it is suggested users to eliminate Arestocrat virus from the system.

Special tips: Spending a lot of time fixing your computer with no success? Don’t want to get things worse, please contact YooSecurity PC experts now to unlock your computer and remove this scam safely.