Help! I’m trying to fix my dad’s computer which has thing called Zorton Win 7 Antivirus 2014. I don’t know whether it is a good thing or a bad stuff that can be used on the computer. But as my dad told me, it pops up every time he turns the computer on and he is told by this program that there are many viruses hiding in his computer. I don’t know whether the message it gives is true or false. But if I want to remove those viruses, I have to pay to the program to get help? Should I pay?

Brief Introduction to This Program

Is Zorton Win 7 Antivirus 2014 a good software for PC users to download and use? The answer must be negative as many computer users have reported it as a fake anti-virus program nowadays. So why we call it as a fake antispyware, the reason can be obvious as many victims of this infection have proved, this fake program uses forged virus warning to threaten people to pay. And by using this trick, many unsuspecting people get cheated and pay to this fake software willingly hoping it can protect their computers from virus attack. After paying to this virus, you will find out that all the warnings are gone and your computer is fully protected by it. Don’t be taken in. Your computer is in great risk, the risk is not caused by those viruses that mentioned by the program, but this fake program.

The Screenshot of This Fake 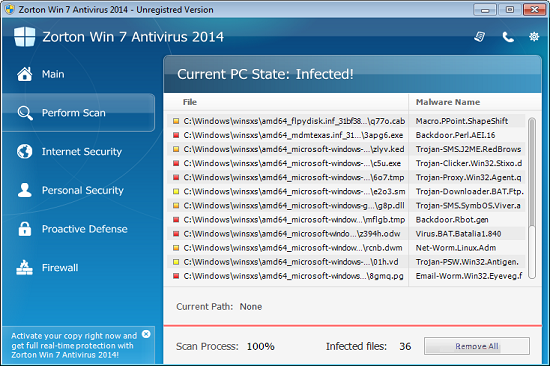 It is really hard for computer users to distinguish that whether this Zorton Win 7 Antivirus 2014 is good or bad when seeing its name for the first time. Also, in order to strengthen the reality, the makers of this fake program can exaggerate the description of it to lure more people to download it. This fake program can be uploaded to many websites for people to download which is the main way to spread this infection. Also, computer users can get infected by this rogue antispyware when they download some commonly used freeware on the web as cyber hackers can corrupted those programs and implant this infection to them. So when people download the corrupted programs to their computers and install them before use, this fake program can be installed at the same time without being known and approved by computer users. What’s more, some computer users can even be attacked by this fake via spam E-mails, that is to say, cyber hackers can pretend this infection as an attachment from legit places, so after people click on the attachment, this thing can sneak into the target computers from the backdoor.

Once this Zorton Win 7 Antivirus 2014 is activated on the affected computer, it can start to scan the whole computer. Also, from the interface of this fake, we can find many options that look professional which can also cheat user to believe that it is a real anti-virus program. The scan result can be really terrible as it can list a lot of threats. Don’t be fooled by it. Those threats are bogus by this infection. All those things want to do is to entice people to pay, so that cyber hackers who make it can get benefits from it. Under no circumstance, should people pay to this virus.

The properties of the Infection

-Always pops up once you boot up your computer or run a program, claiming your computer is in great risk
-Asking you to purchase a code to activate this software, so that it can help you to remove the threats in your computer
-Can modify the computer registry once it is installed into the computer
-Can prohibit legit program to run, including your anti-virus programs.
-Can occupy a great usage of CPU, which slows down the performance of computer or even causes blue screen.

Finding all or some of these symptoms on your computer, sorry to say that your computer is infected by Zorton Win 7 Antivirus 2014. Please contact YooSecurity Online PC Experts for manual removal guide. Also, we will provide a short removal guide below for computer literate.

Manual Removal Guide of Fake Anti-virus Program (For Computer Literate On Window XP, if you can deal with XP problems easily then you can also do the work on Windows 7 or Windows 8)

Step 2: Find Ctrl, Alt, and Delete these 3 keys and then press them together to open task manager to end the process related to Windows Internet WatchDog, the name of the process of it is random.

Then try to find Windows Internet WatchDog, highlight it and choose Remove.

Zorton Win 7 Antivirus 2014 is bogus anti-virus program that tries to lure money from innocent computer users who install this program accidentally on their computers. With such a threat on computers, the infected machines can face many unwanted problems constantly during the use. What’s worse, this program can even block the whole system from using. With the help of infection, many other computer viruses can come and make further damage.

Suggestion: To follow removal guide that mentioned above, a quite level of computer knowledge is needed. Still can’t get out of Zorton Win 7 Antivirus 2014? Contact online experts for help now!