Zorton Win 7 Antivirus 2014 is a fake antivirus which is designed by cyber criminals to target worldwide computers. It is a tricky and risky computer virus that changes itself into various variants with different names and skins, such as Zorton Win 8 Antivirus 2014 and Zorton XP Antivirus 2014 and so on. Indeed, this harmful infection is looking for Windows OS including Windows 7, Vista, XP and Windows 8 etc. It attempts to damage the affected computer and swindle victims’ money. Upon the arrival of the fake anti-spyware, it gets installed in the contaminated system without any consent. It launches itself as a startup program and runs automatic scans through your whole system. After scanning, the rogue program claims that your current PC status is infected, as many infections have been found in your system. To clear those infections, you are asked to sign up and register for the full version of this Zorton Win 7 Antivirus 2014. Once you activate this registered version of the fake antivirus, you will leave your computer to be damaged terribly. Malicious as the rogue program is, it should be removed from the target computer completely and immediately.

The rogue program is designed to be reliable at your first sight, in order to take you into its scam. From the interface of the rogue program, you can see some main functions such as perform scan, Internet security, personal security and proactive defense etc. are quite similar to licensed security programs. Providing that you pay for the registered version of the fake antivirus and activate your copyright, you won’t get any unlimited protection from this rogue program but leave your computer in a great mess. In fact, you should not pay for the full version of the rogue program. Neither the unregistered version nor its registered one will help you deal with infections or protect your system against further attacks. They are just malicious computer infections themselves which does great harm to your computer. With this rogue program, your computer will become really slow. It is easy to get stuck and frozen up during your activities on the computer. Moreover, the fake antivirus takes up high CPU usage and other computer resources. It is capable to bypass detections of your security programs. Therefore, PC users should figure out a feasible manual removal way to get rid of the Zorton Win 7 Antivirus 2014 infection.

Finding all or some of these symptoms on your computer, sorry to say that your computer is infected by Zorton Win 7 Antivirus 2014. Please contact YooSecurity Online PC Experts for manual removal guide. Also, we will provide a short removal guide below for computer literate. 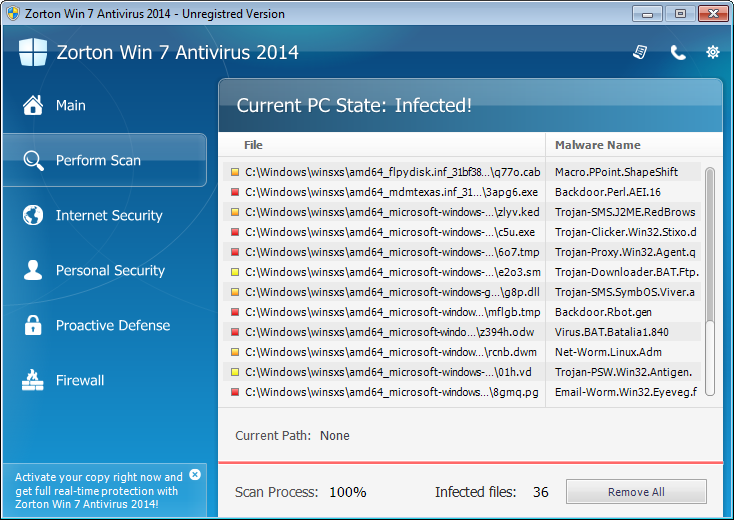 Step 2: Find Ctrl, Alt, and Delete these 3 keys and then press them together to open task manager to end the process related to Zorton Win 7 Antivirus 2014, the name of the process of it is random.

Then try to find Zorton Win 7 Antivirus 2014, highlight it and choose Remove.

As the above mentioned, we know that this Zorton Win 7 Antivirus 2014 is not that reliable as it claims. It is identified as a risky computer infection that users should have it uninstalled immediately. The rogue program usually targets your computer together with potential threats like adware, worms and malware. It can be installed in your computer automatically and display fake scan reports to take you into its scam. It pretends to scan your system and then claim that there are lots of infections found in your computer. By this way, the rogue program tricks you into purchasing its non-existing full version of product. Providing that you register for its full version and install it in the computer, you will find the computer performs badly. Indeed, the slow system performance and poor program functions etc. result from this rogue application. As your advanced antivirus also gets disabled by the rogue infection, it won’t function properly to deal with any computer infection. Consequently, manual removal is a better way to deal with the fake anti-spyware.

Suggestion: To follow removal guide that mentioned above, a quite level of computer knowledge is needed. Still can’t get out of Zorton Win 7 Antivirus 2014 virus? Contact online experts for help now!