Oh, gods! Now I just know that Zorton Win 8 Antivirus 2014 is some kind of virus that has been in my computer for several days. I am not a computer literate as other people who always use computer and don’t usually pay attention to those malicious virus as other PC users know, and I just simply use my computer to get online to watch some movies, contact with friends, read some news etc.. I don’t know how exactly this virus can get on my computer, because it seems I didn’t conduct wrong tasks on my computer. It is stubborn and cannot be uninstalled from the control panel. How can I do to it? Please help me! I don’t want it stay in my computer any more.

Zorton Win 8 Antivirus 2014 is a new variant rogue antivirus program which is a stubborn virus in fact to attack computers running with operating system like windows 8 or windows 8.1. Actually it also belongs to FakeRean/Braviax family which always releases different variants of fake antivirus programs to invade windows computer worldwide to trick users into paying money for a fake advanced version. This rogue program usually exists into malicious websites especially which contains porn, games or free videos and so on. If you visit those websites, you may get this programs resided on your computer. In those malicious websites, this virus usually shows up as a form of pop-up ads, flash pictures, and fake software update message like Java, Media player, Adobe Flash Player updating. If you recklessly click on those stuff things, you get the virus. Besides, this virus also bundles into freeware downloading or inserts into attachments of junk emails or exists in those files or programs sent by strangers to you. And you need to keep an eye on freeware downloading, emails and files from unknown source. Anyway, Zorton Win 8 Antivirus 2014 virus is always spread online worldwide, and you need to behave well and pay attention to what you perform on the Internet, which will be an effective way to prevent virus from getting into your machine.

While Zorton Win 8 Antivirus 2014 virus is on your computer, it will start to carry out different destructive activities on computer. It will block some executable system files and sneak into system to change or replace system start-up items, thus it can automatically activate and run as computer start up. As soon as computer boots up, this program will run a full scanning immediately. While finishing scanning, it will tell you those infected files, which it functions as what other legitimate antivirus programs do. Therefore, many users will quickly click on Remove button, and next this program will ask users to purchase the advanced version to kill those threats completely. Actually, this program as well as so-called advanced version is fake antivirus which cannot really remove viruses. That is why victims still find the same threats reported by the advanced version they have bought. In fact, those threats reported by this program or its advanced version don’t exist in computer. This fake antivirus program just displays a fake message as tricking tactics to scare you to purchase its fake products. Once it deeply roots into system, it will change and disable important system files or processes. In this aspect, it can disable executable files or key files of antivirus, which will destroy firewall of antivirus and disable antivirus program. In this case, the system will get more security loopholes which will create more opportunities for other threats to access infected computer. And gradually your computer will severely corrupted by those infections. Therefore, what you should do first is to eradicate Zorton Win 8 Antivirus 2014 virus as soon as possible if you find it is on your computer. 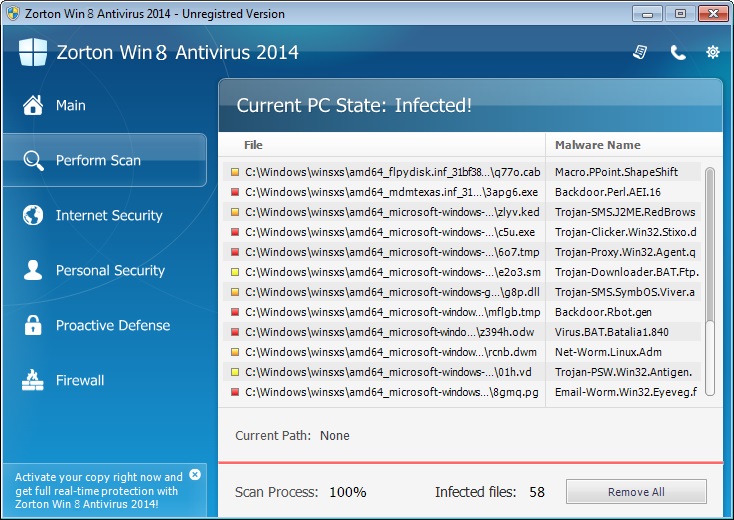 Finding all or some of these symptoms on your computer, sorry to say that your computer is infected by Zorton Win 8 Antivirus 2014 virus. Please contact YooSecurity Online PC Experts for manual removal guide. Also, we will provide a short removal guide below for computer literate.

In order to get into this mode, you should restart your infected computer and tap F8 key constantly when computer is booting back up to get safe mode options on the screen, use arrow keys to highlight the option you want to enter then press E/Enter key. * Usually, this rogue program will be disabled from automatically starting in safe modes. Users will be able to fix the Zorton Win 8 Antivirus 2014 problem without constantly blocks from the fake AV. If you are a Windows 8 user, click here and learn how to boot up Windows 8 to safe mode.

Step 2: Find Ctrl, Alt, and Delete these 3 keys and then press them together to open task manager to end the process related to Zorton Win 8 Antivirus 2014, the name of the process of it is random.

Then try to find Zorton Win 8 Antivirus 2014, highlight it and choose Remove.

Once Zorton Win 8 Antivirus 2014 virus is installed to your computer it will be configured to run automatically along with the operating system, and each time when you start up your computer it will pretend to be computer internet security software to run and display fake security state of your computer to scare you. It aims at cheating out of your money by recommending you to purchase its fake full version. This fake antivirus also performs destructive activities on your computer. This fake program damages the main system files to make it be able to pop up even under troubleshooting mode such as safe mode and safe mode with networking. It damages some fatal system to slow down computer performance. What you should do promptly is to remove it and install a real reputable antivirus program to protect your computer instead of a fake one.

Suggestion: To follow removal guide that mentioned above, a quite level of computer knowledge is needed. Still can’t get out of Zorton Win 8 Antivirus 2014 virus? Contact online experts for help now!