I can’t uninstall this Windows Security Booster thingy from my PC. Please help! It keeps popping up as a block and I am unable to use the computer. It also detects many infections on my system. If I want to delete these threats, I am asked to pay for the program to activate it. I don’t want unknown program but just can’t uninstall it. It always reappears every time I reboot the computer. System restore also fails. What do I do to get rid of this potentially unwanted program?

This pop-up Windows Security Booster is a new variant of fake anti-virus program designed to scam Windows users. This potentially unwanted program is a rogue which often appears on computers as a helpful PC protection software. But it is not friendly at all to our computer. This fake AV can cause lots of chaos on the system which cannot be fixed easily so that users would give up eventually and pay for this scam ware hoping to restore PC from all the consequences. PC users are warned to not pay for this kind of rogue scam malware as it’s only created to benefit computer hackers. Your problems on PC won’t be fixed even if you pay for the “registered version” of the fake program. After all, you will need to remove the malware from the system in order to secure PC and personal data from being hacked by unknown third parties online.

Windows Security Booster rogue is only reported to attack Windows users so far. Mac book users have not been affected by this rogue attack yet. We have Windows 8, Windows 7 and Windows Vista now that are widely used by users globally. Users often don’t know how they are attacked by this rogue scam as the install of this fake anti-virus does not need permission from them. We have found that such rogue antispyware can be installed on Windows in a bundle with freeware. That is, if you download unknown profiles or applications from unauthorized resources online, you would have the chances to get this malware on. As long as the fake AV is installed successfully, system defaults can be modified to create a better running environment for the malware program. And every time the infected PC is started, this fake Windows Security Booster will pop up on the screen to prevent users from running on the machine effectively. Various troubles are expected. To be specific:

How can I uninstall fake Windows Security Booster completely on Windows?
Are you encountering constant troubles when trying to delete the unwanted fake AV because of all the blocks it creates? Do your attempts to run anti-malware program on PC keep failing? Due to the specific characters of this rogue attack, users will not be able to remove the malware by running security programs as they are blocked, disabled or even deleted. In this case, manual removal is an efficient way that guarantees a complete fix. Various program files, registry keys and specific modes of Windows will be involved during the manual removal process. Unpredictable consequences may occur if you are not qualified with sufficient computer skills.

Suggestions: Not a computer savvy and don’t know much about computers or malware? Contact YooSecurity Online PC Experts now for removal help to rid this fake Windows Security Booster virus of PC. Some basic manual steps are also given in the following (for advanced computer users): 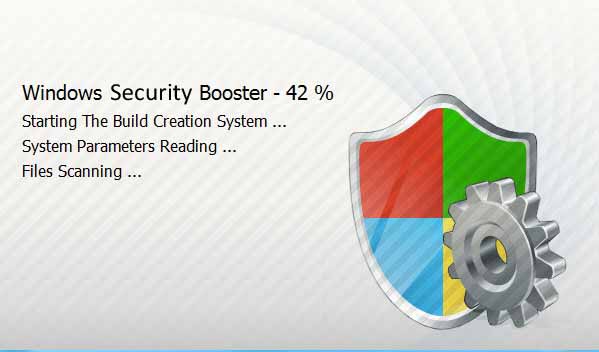 2. The fake scan results by the rogue antispyware: 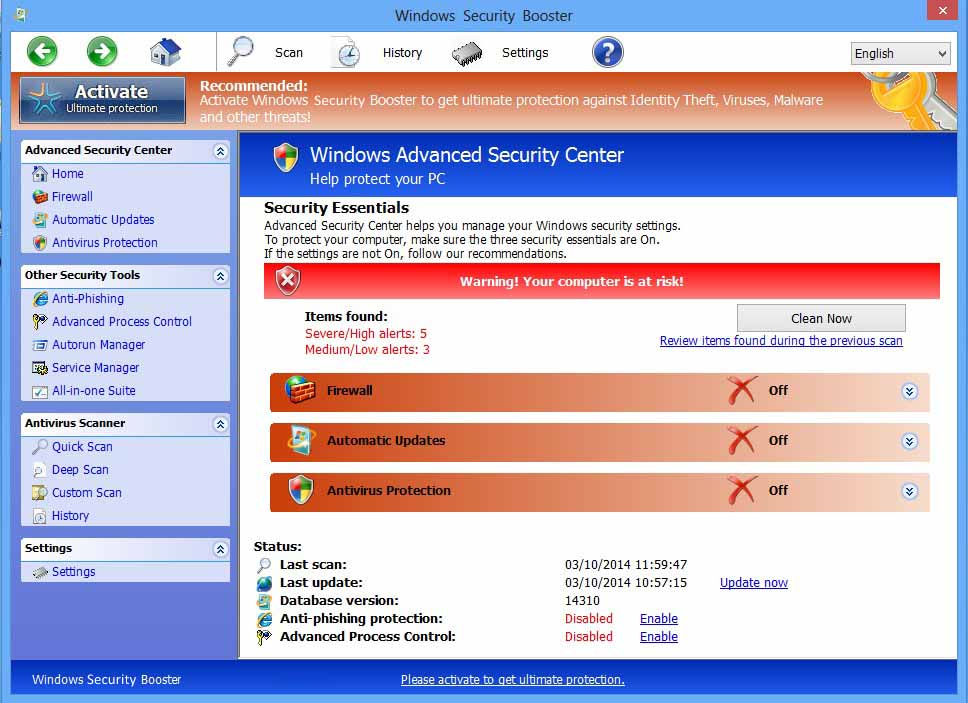 How do I remove all these annoying security popups?

The above message is one of the popups that can be seen by users on Windows displayed by this rogue. It reports Internet Explorer as a potential threat because it contains virus and is suggested to be removed. Similar security alerts will be seen constantly on the infected PC. However, they are not correct statements but false alerts displayed by the rogue to mess up your computer. System performance will be greatly affected if you delete any vital file or application on the system. To get rid of all these annoying popups, remove the fake Windows Security Booster rogue completely from computer. Otherwise, you will keep being blocked and may finally be prevented to access the system even in safe modes. The longer the malware program resides on your system, the more problems you will get.

Where can I get the activate codes to fix the problems on my PC?
If you have been bugged by this malware and wanted to get help from it, you will be asked to activate the program first. The activate codes need to be purchased. Do not fall for this scam! There does not exist any “full version” of this program and your problems will not be solved by the rogue malware. The efficient way to restore your PC is to manually get rid of this Windows Security Booster scam malware.

* Special tips for Windows 8 users: To put a Windows 8 into safe mode, press CTRL+ALT+DELETE to get the Restart option, hold down Shift key then select Restart. On the Choose an option screen, select Troubleshoot, Advanced options, Startup Settings, Restart. If you are still having troubles with the fix process on a Windows 8, contact online PC experts for help now to remove Windows Security Booster virus malware.

Have you ever been bugged by unknown pop up programs? Are you ever required to pay for an unwanted software that pops up on your computer without consent and that you can’t uninstall? When getting this fake Windows Security Booster on your PC, you will be having these troubles. This pop up program is a fake anti-virus program released by hackers to scam PC users. It looks like a legit anti-virus program but is in fact a rogue with annoying characters. It can not only install on a Windows without consent, but create constant blocks to prevent users from using the computer efficiently. By reporting to users that many potential infections are detected on the PC, the rogue is trying to get them to pay for the fake “registered version” of the program so as to scam them. Users should not pay for this pop up malware but get rid of it immediately once being spotted. The longer this rogue resides on your system, the harder it gets for you to completely delete the fake AV off of the PC.

Note: Cannot get rid of the pop up Security Booster thingy with all the efforts of own? Can’t lost PC to this nasty malware? Contact YooSecurity Experts now to get help to avoid further consequences: