How to uninstall the Windows AntiVirus Booster popup from Windows? It keeps blocking me from using my computer. I don’t want this program but can’t remove it successfully. I tried to uninstall it from Control Panel and use a system restore point. Neither of them worked. My anti-malware program is also blocked. I don’t know how to get rid of this pop up unwanted program. What other options do I have to uninstall it from my PC?

Windows AntiVirus Booster is a rogue program that claims itself as a helpful anti-virus software with a regular appearance. It mainly attacks Windows computers around the world and puts Windows users into all kinds of troubles. This malicious fake AV is released by unknown third parties online to scam average PC users by reporting fake security alerts to them. In order to get rid of all the “potential threats” detected by the program, users are asked to pay for an activate code to get the “full version” of this rogue. Otherwise, they will keep suffering from all the difficulties brought up by the unwanted fake AV program. In short, this pop up software is a scam ware that needs to be uninstalled immediately to secure PC from further problems.

Windows AntiVirus Booster fake anti-virus is a potentially unwanted program that can be installed on your computer without permission via bundling with freeware and other spam resources. Regular anti-virus programs are found to fail to prevent this rogue attack and may even be disabled by the infection. Once the rogue is successfully installed, it will automatically pop up to launch system scans which cannot be stopped completely. During the scans, you are blocked from opening files and programs on the PC because the rogue will claim that the files or programs you attempt to run contain potential viruses. Many uncertain threats are also stated after the scans. Generally, by displaying constant blocks and giving you a hard time to run on the PC, the rogue scam malware is trying to get as many computer users as possible to pay. Lots of troubles can be expected on the infected PC. To be specific:

How can I uninstall Windows AntiVirus Booster pop up completely on Windows?
The fake anti-virus program is well designed to avoid removals from security programs. Hence, to remove the rogue program, users are suggested to do it manually. Besides from uninstalling the rogue program from system, program files, registry keys and security settings (Firewall alerts) need to be checked as well to ensure a complete removal. Compared to other removals, manual removal is a more effective way to get rid of this rogue from your computer. For that, expertise will be required to accurate the process of the removal as any vital mistake could be resulted due to a single misleading step. This passage contains a guide below to manually remove Windows AntiVirus Booster virus pop up.

Suggestions: Not a computer literate and can’t deal with such malware problem on your own? Contact YooSecurity Online PC Experts now for removal help. Some basic manual steps are also given in the following (for advanced computer users): 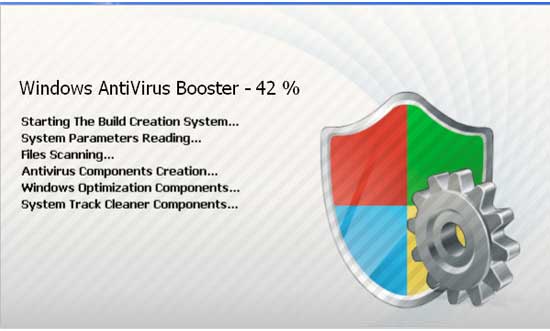 2. “Warning! Your computer is at risk!” screen: 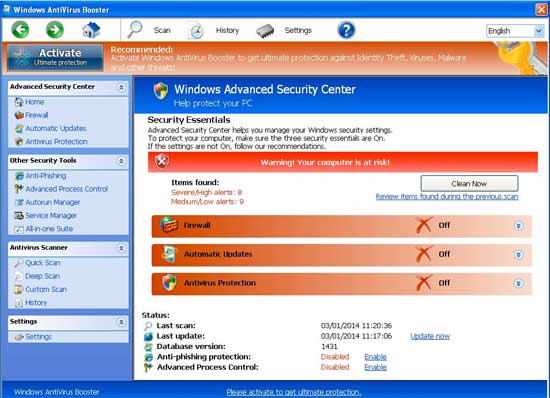 3. Scan results are displayed to you: 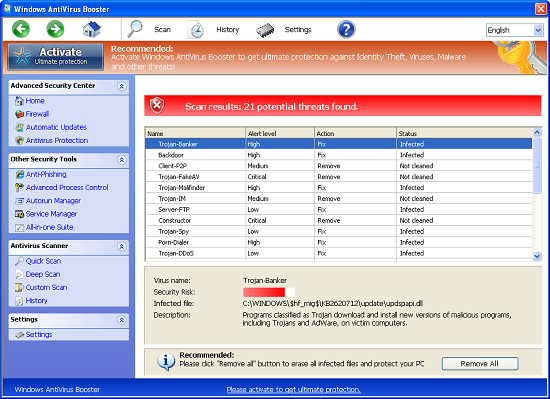 How do I remove all these Windows AntiVirus Booster virus security alerts?
Once the rogue antispyware program is installed, it will display many security alerts to convince users that the performance of the computer is poor and to block them from operating on the machine efficiently. However, these pop-up alerts are false detections generated by the fake AV to trick you into making the status of the PC worse. For instance, Internet Explorer, as a regular and widely used browser, is suggested to be deleted from your computer to keep it secure:

Regular programs or important system files can be detected to contain viruses and are suggested to be removed by this rogue. These alerts will be seen whenever you attempt to start a program or open a file. They certainly have blocked you from running on the computer appropriately. And system performance will be affected for sure if you accidentally delete these “infected” files. To block these annoying popups, delete Windows AntiVirus Booster virus manually from the computer now.

Where can I get the activate codes to fix the problems on Windows?
To get help and delete all the “detected threats” on PC, you are suggested to activate the program to its registered version so that it can fully provide its service. This is the point where users can be scammed by the rogue if they decide to use this unknown pop-up program. Unfortunately, users will not get rid of these problems on PC by paying for this fake AV. Instead, their money may be transferred immediately through unknown servers to remote hackers without being able to get back. If it’s bugging you, uninstall the Windows Antivirus Booster rogue scam malware ASAP with the help below.

* Special tips for Windows 8 users: To put a Windows 8 into safe mode, press CTRL+ALT+DELETE to get the Restart option, hold down Shift key then select Restart. On the Choose an option screen, select Troubleshoot, Advanced options, Startup Settings, Restart. If you are still having troubles with the fix process on a Windows 8, contact online PC experts for help now to remove Windows AntiVirus Booster virus.

The Windows AntiVirus Booster virus pop up is a fake anti-virus program that is particularly designed and released online to attack Windows users mostly. This unwanted rogue can sneak onto different computers via bundling with freeware and regular anti-malware tools can’t seem to stop it efficiently. System defaults will be modified once the rogue is on. Users will be constantly blocked from using the machine properly due to annoying false popups. The rogue will then scam users when they are unable to fix these problems by persuading them to pay for a “Registered version” of the program. This is not a reliable program that can be kept on Windows for protection. Instead, it should be uninstalled as soon as possible to prevent PC from being attacked by further malware or threats. Manually get rid of the rogue program from your computer now with appropriate help.

Note: Can’t get rid of Windows AntiVirus Booster virus pop up successfully? Contact YooSecurity Experts now to get help to secure your PC from further problems: