Yesterday when I turned my laptop on, Windows Safety Master appeared automatically on my screen, running a scan and telling me that my computer has been seriously infected. I searched the Internet and found it was a virus. But even though I have tried  EVERYTHING within my ability to uninstall this fake antivirus program, it didn’t help at all! Not only will it not close down, but it will prevent any other program from opening!! You name it, music, videos, games, everything! I can’t open anything because the program is in front of all the desktop icons which I cannot close it down. I also tried to open task manager to end the process, but that won’t even open! It is really annoying. How to get rid of fake Windows Safety Master?

Windows Safety Master is a newly-published rogue program that has been reported to only attack Windows OS (Windows 8, Windows 7, Windows XP, Windows Vista). But it is not associated with Microsoft at all. This rogue program is widely distributed in the network and it can perform many malicious activities as soon as it is downloaded. It runs itself automatically whenever system boots up, and then creates malicious files and even adds its own registry to mess up your computer registry entries. This virus pretends itself as a security tool but it provides no function to detect viruses or even protect your computer. It just defrauds money from targeted users.

As similar as Windows Ultimate Booster and Windows Efficiency Kit, this fake antivirus also installs by bundling with other software or visiting some malicious websites. It can be installed by a Trojan as well. Once installed, it will take over your desktop in order to let its bogus scan run automatically. You can see the scanning process bar clearly. After a few minutes when the scan is finished, it displays that several infections are found and asks you to activate the full version in order to get ultimate protection. Don’t be tricked by this fake antivirus! If you are careful enough, you’ll find out the results of the scan are always the same. All the results displayed are not real. The scammer just wants to bamboozle you into spending money on its full version before you realize that these warnings are fake. Under no circumstance should you pay for this useless product.

As mentioned above, we can see the foremost goal of this program is to gain access to your credit card information and linked finances. It is easy to get installed on your system but will be hard for people to remove. Windows Safety Master won’t show up in Control Panel/Add or Remove Programs so people cannot uninstall it by using the similar way they uninstall a normal program. In addition, this virus can prevent users from accessing things on the computer. All the desktop icons are behind this fake Windows Safety Master scan so that you have no chance to access desktop. In some cases, the virus just covers a large part of the screen, but as soon as you run the executable programs, it prompts you that the program or file is infected, refusing to give you access. It gives you an impression that the computer has been infected with serious threats which block everything on the computer and if you want to use the computer, paying for the full version is needed. It fools computer users into thinking Windows Safety Master can help remove all the viruses and Trojans and protect the computer from being infected again in the future. But this is not the truth. It is actually a virus contains no ability to remove viruses and protect you from malware or any of the other functions that it markets. All it can do is to mess up your system and use fake error messages to scare you. Once detect, you have to remove Windows Safety Master immediately.

How can I uninstall Windows Safety Master completely on Windows?
The rogue pop up can block almost everything you try to run on the infected computer including your anti-virus programs. And it usually won’t be uninstalled from Control Panel as many users have the unwanted program coming back again and again after they thought they had removed it. Compared to other removals, manual removal is a more effective way to get rid of this rogue from your computer. For that, expertise will be required to accurate the process of the removal as any vital mistakes could be resulted due to a single misleading step. This passage contains a guide to help you manually remove Windows Safety Master virus.

Suggestions: Not a computer literate yourself? Contact YooSecurity Online PC Experts now for removal help. Some basic manual steps are also given in the following (for advanced computer users): 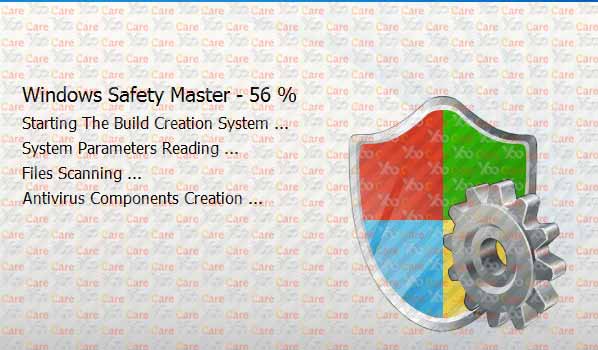 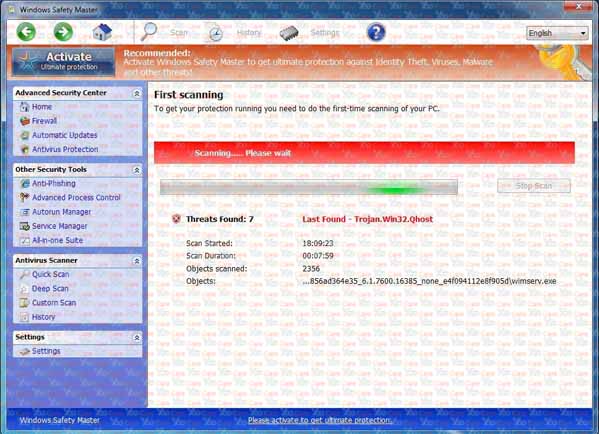 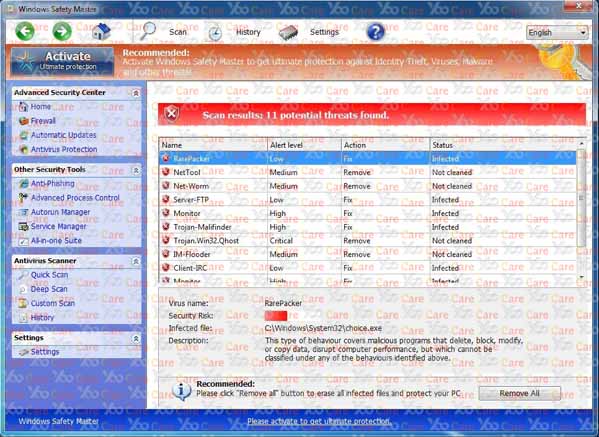 How do I remove all these Windows Safety Master popups?
Once the rogue program is installed, it will not only automatically launch upon system startup, but report many potential threats inside your computer. Security popups will be displayed whenever you attempt to run a file or program on the infected computer. For instance:

“Firewall has blocked a program from accessing the Internet  c:\windows\system32\taskmanger.exe is suspected to have infected your PC.
This type of virus intercepts entered data and transmits them to a remote server.”

Similar programs or system files can be detected to contain viruses and are suggested to be removed by this rogue. As a matter of fact, these pop-up security alerts are fake. It’s trying to confuse users and get them to delete important programs or system files on the PC. To block these annoying popups, delete Windows Safety Master manually from the computer now.

Where can I get the activate code?
To remove all the “detected threats” from your system, you are required to activate Windows Safety Master first. A certain amount of money can be requested from you in order to complete this process. If you are tricked and believe this pop up is legit, you may want to pay and have your PC protected. However, users will not get out of any of these troubles once paid. The scam ware will be left on your computer while remote hackers have probably taken your money away. Hence, we don’t suggest victims of this rogue to pay any amount to this unknown pop up program. If it’s bugging you, uninstall this Windows Safety Master scam malware ASAP!

Restart the infected computer, tap F8 key constantly when computer is booting back up to get safe mode options on the screen, use arrow keys to highlight the option you want to enter then press E/Enter key. * Usually, this rogue program will be disabled from automatically starting in safe modes. Users will be able to fix the Windows Safety Master malware problem without constant blocks from the fake AV.

* Special tips for Windows 8 users: To put a Windows 8 into safe mode, press CTRL+ALT+DELETE to get the Restart option, hold down Shift key then select Restart. On the Choose an option screen, select Troubleshoot, Advanced options, Startup Settings, Restart. If you are still having troubles with the fix process on a Windows 8, contact online PC experts for help now to remove Windows Safety Master fake pop up.

Video Guides On How to Remove A Rogue Program:

Alternatively, you can view similar removal video guide directly on our website.

Windows Safety Master is a virus but it masquerades itself as a genuine security software to trick innocent users. This virus comes from Rogue.FakeVimes family and it will use malicious Registry entries to launch itself every time you start Windows. It is annoying if this virus is downloaded on your computer because it won’t offer you any feature to close it down or even uninstall it. It just uses a potent combination of misleading attacks against your PC to encourage you to spend money on a fake ‘full’ version of its software. To get worse, it won’t allow you to run your real antivirus to get rid of it. It almost terminates all the applications you try to run on your computer and blocks you from opening task manager. Don’t do Internet banking or buy anything online while this rogue program is infecting your computer. You have to uninstall it as quickly as you can in order to keep your PC and your personal information safe.

Note: Having troubles to understand the guide? Can’t get rid of Windows Safety Master virus pop up successfully? Contact YooSecurity Experts now to get help to secure your PC from potential threats: