Vanilla Reload is one of the payment platforms together with MoneyPak and Reloadit, as one can see from the below screen shot. By highlighting “You have 72 hours left to enter your payment”, this Vanilla Reload Virus scam tries to get you to pay the fine, which can be ranged from $100-$500, to get your PC unlocked. Otherwise, a criminal case will be started automatically against you putting you into some illegal troubles later on:

As nasty and annoying as this virus is, Vanilla Reload scam can get itself installed on your computer without permission. It’s actually created and distributed through the Internet among many malicious web sites and free software. By using the technique of bundling, this virus program can be installed together when you install other free software. Once it’s ready, it will pop up all of a sudden and totally block you out of your own PC with some warning message saying “Your Computer Has Been Blocked”. According to the message that’s being displayed on the screen, you have violated certain laws of the country and to stop you from conducting these criminals activities any further, your computer has now been blocked. Solution to unlock your computer, given by this Vanilla Reload Virus, is to submit a certain amount of fine within the limited time period. If the time elapses and the payment is failed to submit, you will soon be trapped with illegal troubles which might put you into jail later on. Apparently, no one can burden such blackmail. So people pay the fine to this Vanilla Reload Virus hoping to get their PCs unlocked as well as getting themselves out of any illegal troubles. But it turns out that their PCs remain blocked even after the payment is submitted. That’s because this is a total and pure cyber scam! Computer users shouldn’t pay the fine requested by this Vanilla Reload Virus.

Suggestions: To unlock your computer from this annoying Vanilla Reload scam locking message, a malware removal is needed ASAP. Contact YooSecurity Online PC Experts for assistance if you are not a computer expert and have no idea on how to do it on your own. 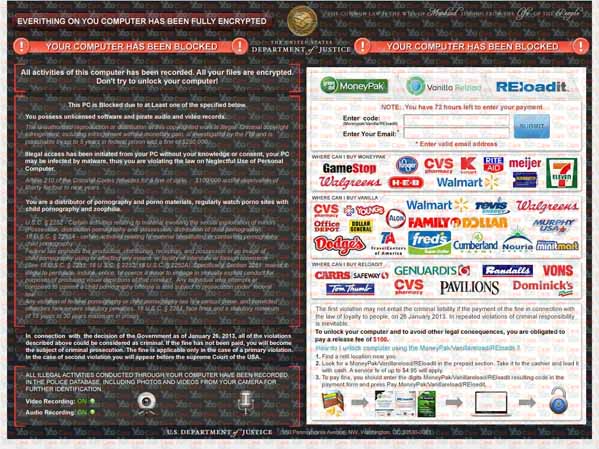 Above is the screen shot of the United States Department of Justice “Your Computer Has Been Blocked” scam virus which also belongs to a Vanilla Reload Virus because it uses Vanilla Reload as one of the many payment platforms. One may find it quite real and legit seeing from its appearance. It may contain your personal details on the locking screen including your IP address, residential info and even personal images. But no matter how the message looks, it’s still fake. It has nothing to do with the U.S. Department of Justice or the Vanilla Reload. By making it look more real, this Vanilla Reload scam virus can gather much more money for cyber criminals.

Certainly, paying the requested fine will not help you unlock your computer but will help cyber criminals benefit. And antivirus software doesn’t help much either since it cannot stop this Vanilla Reload Virus from the first beginning. But with this warning message on the screen, one cannot gain access back to the computer for usage. So, to unlock the computer from this fake warning, manual removal is suggested here as it guarantees a complete fix. Expertise will be required during the manual removal process. Please follow the steps below to get started right away:

Step 2: Press Ctrl+Alt+Delete at the same time to open the Windows Task Manager; go to Processes tab on top; then End processes associated with Vanilla Reload Virus or processes not belonging to system.

Step 4: Delete all the files related to Vanilla Reload Virus in Registry Editor:

Vanilla Reload Virus is also known as the “Your Computer Has Been Blocked” scam message. This message, claiming that it’s from some authority organizations, will lock your computer screen completely because of your online behaviors mostly about watching child porn or distributing pornographic content. But most computer users haven’t done anything according to what it says. They are confused by this block on their computer screens. As a matter of fact, one doesn’t need to believe what this locking screen says because it is fake. It’s actually coming from cyber criminals who try to get your money by using the force of law as a weapon. The truth is, your computer is under the attack of a virus or malware. And yes, even though antivirus software has been installed on the computer, it can still attack your computer somehow. This Vanilla Reload Virus is believed to be distributed among malicious web sites and free software by using the technique as bundling. Lots of computer users have been reported to suffer from this scam. The better solution here, instead of paying the fine and helping cyber criminals benefit, is to get this virus removed out of the computer.

Notice: Still being blocked out of the PC by this Vanilla Reload Virus no matter how many times you have restarted the PC? Please contact YooSecurity Experts now to get help if you cannot unlock computer permanently from this annoying pop up fake message.