How to get rid of ICE virus scam? I logged on to my computer and a Moneypak ICE virus warning appeared. Now my computer keeps saying it is blocked by ICE Cyber Crimes Center virus moneypak hoax and you have to pay a fine of $300 or $400 to unlock the computer. Is ICE cyber crimes center real or just a scam? If it is a scam then i need to know how to get the ICE virus off my computer immediately. The problem is my screen is locked out and I cannot do anything at all. Anyone else has the your computer has been blocked by ICE Cyber Crimes Center Virus Scam like me? Will enter the codes then i can unlock my PC? If not, which files need to be changed or deleted when hit by ice virus? And i wanna know how to unlock computer from ICE cyber crimes center malware screen without paying $300 or $400 fine? Solution below:

Computer Locked by ICE Cyber Crimes Center Virus Scam That Asks For $300, $400 or $450? How To Remove ICE Virus To Unlock Computer?

Can the ICE Cyber Crimes Center Virus lock your computer and ask for a fine to unlock? The answer is positive as many users have been ripped off by this ICE virus. This ICE Cyber Crimes Center block thing, being released lately to attack computer users mostly in the United States, is categorized as a computer ransomware that usually claims to be from legal organizations or institutions and requests certain amount of fines from computer users to unlock their PCs. Despite from its deceitful appearance, this ICE Cyber Crimes Center scam shouldn’t be trusted at all! This pop-up block, also known as the ICE Virus, indeed blocks everything on the screen asking for $300 or $400 payment thru Moneypak code. This is believed to be a new variant of FBI Moneypak Virus that spreads in USA quickly. Lots of computer users have become the victims of this ICE Cyber Crimes Center virus scam recently. This ICE virus is the largest investigative agency in the U.S. department that is designed to lock your computer and scam you into paying for the penalty fees. This is Rye police department – computer crime. Nowadays, many computer users are stuck with the ICE cyber crimes center message telling them to pay 300$ or 400$ by using Moneypak code. Many of them are trying to get rid of it with instructions on other websites, but they don’t think they can do that well. After spending lots of time they still have the message on the computers that states they must pay a fine of $300 or $400 using Moneypak within 48 hours or they will be put in jail. What to do when your computer is blocked by ICE Cyber Crimes Center Scam that’s asking for fine? Learn more details below.

Generally, this kind of computer malware can escape from Anti-virus or Anti-malware programs to get on different computers to display its scam messages. This can be done by bundling with malicious links, unauthorized freeware and unknown email attachments online. Hence, the ICE virus does not need permissions from PC users to get installed. That’s why most victims of this ICE virus normally don’t know how they are trapped with this malware all of a sudden. The hackers that are behind the ICE Cyber Crimes Center Virus are constantly changing the layouts of the warning message, but just be aware that nobody will ever lock the computer for legitimate reasons. If this happens it is a computer attack constructed by cyber criminals and should not be taken seriously. Do not send them any money. Instead, the ICE virus needs to be removed from the computer as quickly as possible. While it is installed it can attract additional viruses and Trojans to further impact the PC.

ICE Cyber Crimes Center Virus Moneypak Scam wants $400 to unlock your computer then you have to pay the fine within 48 hours? No. It is not real but a ICE Virus. Masquerading as police agencies, the hackers made computers with a virus and then scare the users that illegal online activity had been detected or watching child porn and that a fine of $300 or $400 would have to be paid to unlock their computers. Otherwise, the police will come and kick your door and you will be going in jail. One of the victims said: “I got a virus on my laptop from ICE cyber crimes wanting me to pay $300 or 400 dollars to unlocks my computer. This happened when I was trying to watch a TV show online and a message has appeared saying my computer has been blocked what do I do ? Is it a scam and how do I remove ICE Cyber Crimes Center spam?” The ICE cyber crimes center is a ransomware that infected millions of computers today, you have to get rid of ICE Virus with an efficient way.

If you received a screen message that the ICE Cyber Crimes Center has frozen your computer from USA unless you pay 400 dollars, please don’t trust the warning message. That is virus called when they turn on the webcam and take your picture and they say that you have to pay some money in 48 hrs. Many users from America recently got the ICE Cyber Crimes Center virus on their computers and were having a lot of trouble getting rid of it. They have picked up this ICE virus and have tried starting in Safe Mode then ctrl+alt+del but the virus screen appears in safe mode. Well, over at this website, you can remove the virus completely and out of pain. 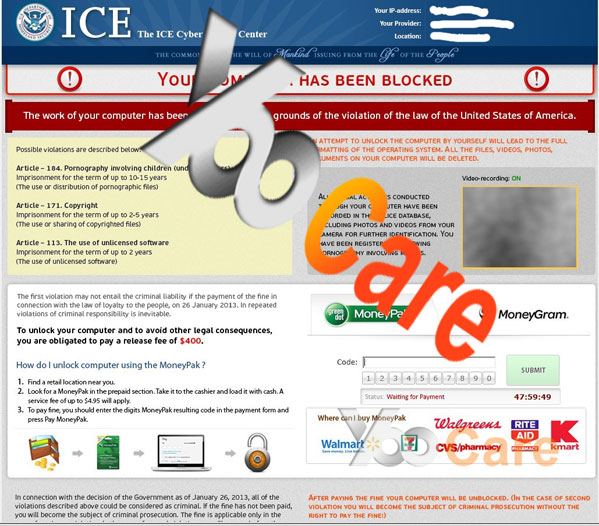 ICE Virus $450 Scam – The ICE Cyber Crimes Center With The work of your computer has been suspended on the grounds of the violation of the law of the United States of America Warning. 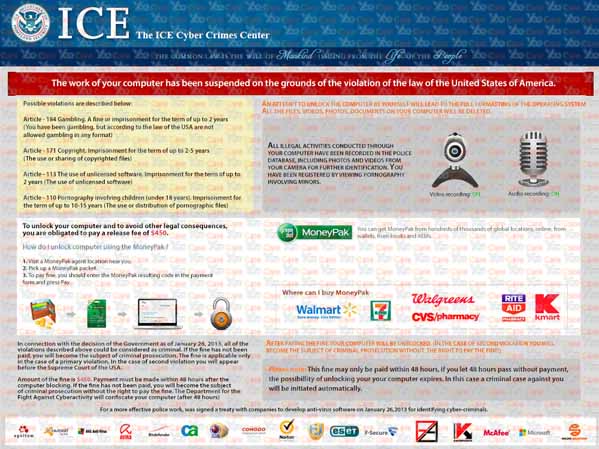 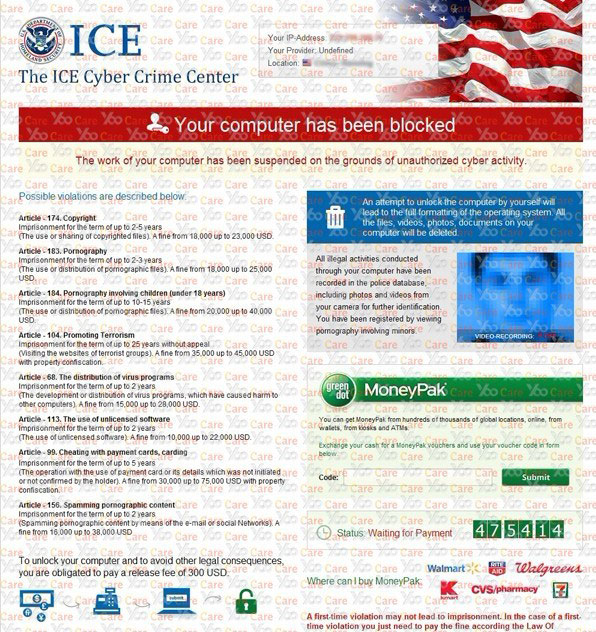 The ICE Cyber Crimes Center Virus is a malicious computer attack that locks the computer and displays a notification alerting the user that their PC has been locked because of being linked to fraudulent and illegal online activities. The ICE Virus is meant to trick the user into thinking it is coming directly from the US Immigration and Customs Enforcement (ICE) Cyber Crimes Center, and it claims that the computer has been involved in the distribution of SPAM emails, pornography, and copyright material. 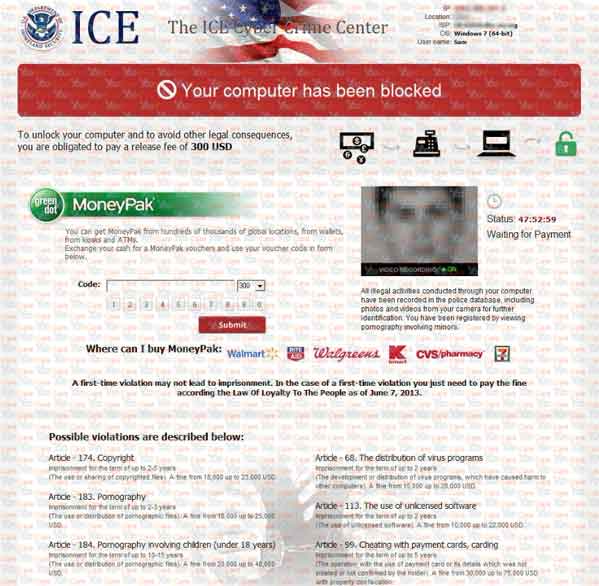 As soon as the ICE Cyber Crimes Center Virus is installed it locks all of the features of the computer and the user isn’t able to navigate away form the warning message. It will not close out and another window will not open. Even if they attempt to shut down manually and restart in safe mode the ICE Virus warning message will activate and lock the computer again. The message states that a fee of $300 or $400 must be paid by using a MoneyPak card, which is a form of prepaid funds transferring. This warning message is obviously a scam, as no legitimate law enforcement group will ever lock a users computer and demand a payment be sent over the computer.

What to do if you received a notice that computer is locked unless fine is paid? When your computer is locked by ICE cyber crimes scam asking to pay $400 to unlock computer or you have to go to jail, don’t worry about this, although it says it is anti-virus software on January 26, 2013 for identifying cyber-criminals, it is not true. On the ICE Virus screen it displays an attempt to unlock the computer by yourself will lead to the full formatting of the operating system. All the files, videos, photos, documents on your computer will be deleted. All you saw are not real. Can the ICE Cyber Crimes Center Virus Moneypak Scam $400 survey your browser? No. You can fix the problem here.

Step 2: Restart your computer in safe mode with networking. To do this, please keep pressing F8 key before windows launches until you get there shown as below (For Windows XP, Vista and Win 7); If your OS is Windows 8 please click here:

Step 3: Press Ctrl+Alt+Del keys to open the Task manager to stop the progress of Fake ICE Cyber Crimes Center Virus Scam. Because the ICE Virus’s name will be changed fast, it will be displayed with different names with random letters.

Step 4: Delete all the files related to ICE Virus Scam.

The only way to be certain that this ransomware is fully removed from the computer is to remove the files manually. We have provided a full removal guide below that will explain the steps needed to rid the computer of the ICE Cyber Crimes Center Virus. The sooner it is fully removed, the better. Don’t forget to make sure to run virus scanning software on a regular basis to prevent future problems.

Alternatively, you can view this ICE virus scam removal video guide directly on our website.


Please bear in mind: Neither the police nor the government will lock up your computer by this seem-to-be-legit ICE Cyber Crimes Center block and require $400 to unlock PC. This ICE virus page is a total scam! It cannot be trusted even with a trustworthy appearance. Up until now, you may have understood the processes of how to get rid of ICE Cyber Crimes Center Virus. Yes, if you follow the ICE Cyber Crimes Moneypak virus removal instructions above then you can bypass the blocked screen and stop the popup, next remove all files generated by the fake ICE Moneypack virus from your laptop or desktop. Remember don’t be fooled and pay the fine of $400 to unlock your computer, you won’t be arrested by the FBI police Government as it is a scam ware. Even if you do pay the requested amount, your PC won’t be unlocked according to what the ICE virus says. Instead, you will become the victim and lost the amount of 400 dollars to the hackers or real criminals. More harm will be made to your computer if you leave it in the system for long. We believe there’s no antivirus software that can deal with this ransomware, so don’t waste any time on trying other antivirus programs from the Internet while having the possibilities to fall into another fake antivirus scam. To be frank, there is no free meal! If you are going to take this ICE virus scam out, you have to make it work manually. If you really can’t remove it on your own, please find a PC expert for further assistance. This is the best choice to save your computer timely.

All for your sake: To contact an expert such as YooCare/YooSecurity for professional service is well recommended if you really don’t know how to remove ICE Cyber Crimes Center virus malware scam that asks for Moneypak code on your own: