How to remove XP Total Security 2013 Virus Firewall Alert manually as it disabled my antivirus programs?!!! I can’t do anything when the XP Total Security 2013 has blocked a program from accessing the internet notice pops up.  And i am completely freaking out. I can not enter safe mode with networking, regular safe mode, or safe mode with prompt. I have the options, however the virus blocks every mode available. How did i get this thing as it didn’t visit malicious websites.

XP Total Security firewall alert and its other forms of fake anti-virus programs available in different names are designed to deceive people and scam them of their hard earned money. It uses scare tactics to rob people. One this fake application fins its way to any computer system, it begins to generate fake system scans and fake threat reports to scare the computer user.

The fake notifications usually come up once you try to run a program or access the internet. The scans would look as if the application is running a genuine system scan and then it tells you of falsely generated threats and viruses detected. XP Total Security 2013 is not a real security application and does not even have a virus database and thus lacks the capacity to scan or protect the computer system. 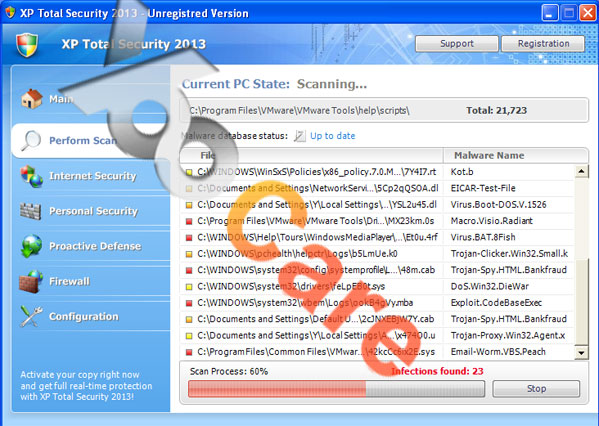 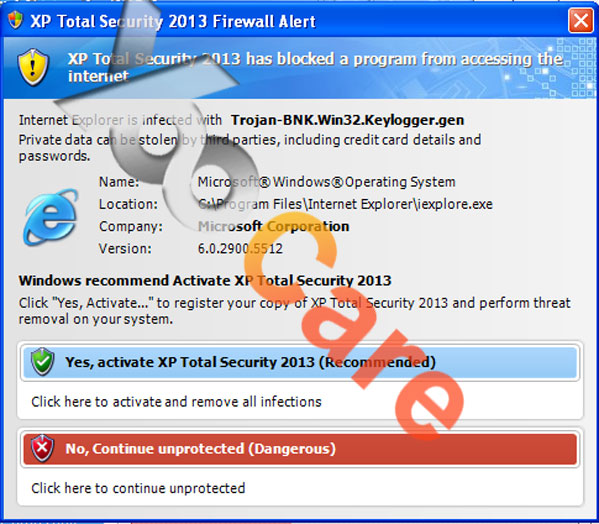 How XP 2013 Total Security Virus Firewall Alert gets on a computer?

XP Total Security 2013 Unregistered version is not available as an installable program. It sneaks into the computer along with a Trojan virus. The Trojan is sneaked into downloaded free content on the internet such as various shareware and freeware on infected websites. It could also be spread as spam email attachments or video codec files. Hackers have various means of spreading this malicious program to unsuspecting computer users.

XP Total Security is clearly a rogue application that is designed to scare people into believing that their computer has been affected with multiple viruses so as to trick them into paying for the non-existing licensed version. It would also slow down the computer system and affect the smooth running of several programs.
To remove this Fake AV from your system you would need an effective method. Since the fake application has take hold of your computer settings you may find it hard to do it the conventional way.  Manual removal of XP Total Security alert is the best way.

4. Search for all related registry entries infected by virus and clean them out:

Take note that XP Total Security 2013 is a fake application that should be rooted immediately out of your system. It can help hackers track your keystrokes and web browsing history. The fake scans can also trick the PC user into purchasing the licensed version of this fake application that does not even exist. It is thus important to root out XP Total Security virus firewall alert and completely remove it from your computer system. To do this is not always easy as the rogue application has altered some registry and computer settings. Usually you would need a too meant for this purpose. You would need to run the computer on safe mode and then use the efficient guide to resolve and completely remove all files and components of this fake application.

Note: If you are not computer savvy and don’t know how to get rid of XP Total Security 2013 Virus Firewall Alert, to save your computer in time, please contact YooCare PC experts 24/7 online to completely and safely clean it out.