Vista Total Security 2013, How to Remove

How do i get rid of Vista Total Security 2013 Virus Firewall Alert without downloading anything?!!! Has anyone ever got a message from the Vista 2013 Total Security has blocked a program from accessing the internet notice? It was driving me crazy when i contracted with this fake AV. How can i remove Vista Total Security 2013 – unregistered version from my computer completely by myself? By the way, it is another laptop as the infected has been disabled.

Vista Total Security 2013 has blocked a program from accessing the internet alert pops up? This is a new version of fake Vista 2013 virus that effects your computer, and this rogue software as well as Win 7 Total Security 2013 Firewall Alert comes from the same family. Vista 2013 Total Security is not an anti-virus program that you should trust. Good to know it is a rogue security system that does more harm than good. It does not have the capacity to protect your computer system but would instead cause you several problems. It is designed to deceive the computer owner into believing that their system has been severely infected by viruses and malware when that is not the case.

Vista Total Security 2013 virus and several other similar fake anti-virus programs are all described as Baravaix programs. They come in various names all pretending to be security applications when they are not. They sneak into the system and begin to show fake scan notifications to deceive the PC user that a real legit system scan is taking place. After the scan they would then produce fake alert notifications and threat warnings to scare the PC user into believing that the PC is infected by viruses.
The aim of the fake scans and threat alerts is to get the PC owner into purchasing the licensed version. If you try to use this application to clean the system and remove the alleged threats detected, it would prompt you to get the licensed version which you will have to pay for. The problem is that the threats are faked and there is no licensed version of this application. It is just a scam to steal your money and your payment data.  You must eliminate Vista Total Security rogue thing ASAP. 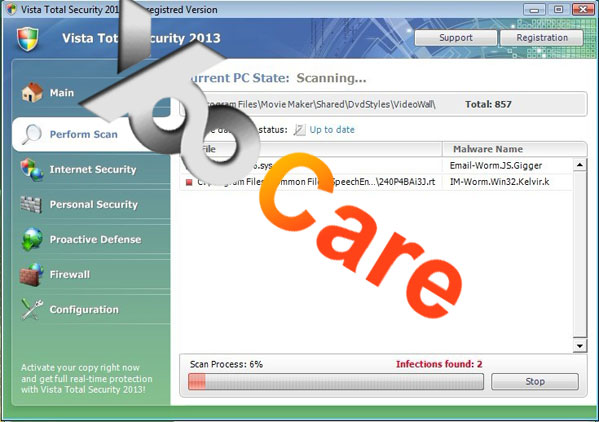 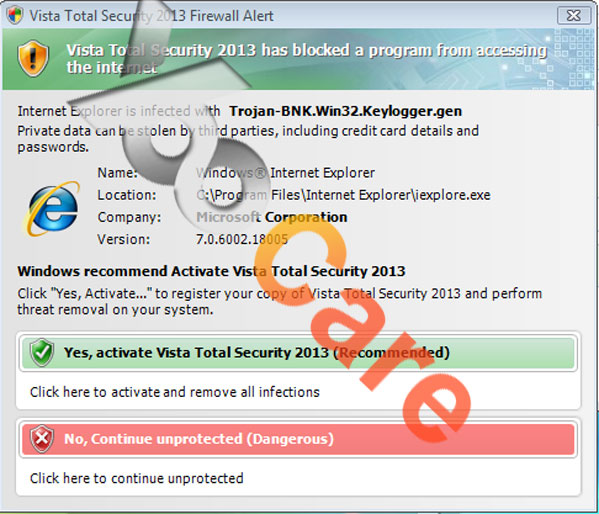 How Vista 2013 Total Security Virus Firewall Alert gets on a computer?

As A Rogue Application, Vista Total Security 2013 firewall alert sneaks unto the computer system without notifying the computer user. It is usually spread through Trojans hidden among infected content online. It could be unsuspectingly downloaded from software update websites, freeware and shareware downloaded and spam email attachments clicked. Hackers who spread this malware use various means to spread it to unsuspecting victims.
As soon as the program gets on a system it would immediately alter the registry and computer settings. It would also configure itself to activate at the next computer reboot. As soon as it gets activated it would begin to disrupt the smooth running of some programs and also begin to produce fake system scans and threat notifications all designed to scare the PC user to purchase the fake non-existing licensed version.

It is important to act immediately once you detect that this fake application has sneaked into your system. To confirm that Vista Total Security 2013 is a rogue anti-virus program you can simply use your legitimate anti-virus program to scan your system. You would notice that it reports Vista Antivirus Pro 2013 as a threat to your system, although you may find it difficult to just remove it from your system.
To remove this application from your system you would need an effective way. Since the fake application has take hold of your computer settings you may find it hard to do it the conventional way. You would need to first get the computer running on safe mode before you can then remove all its files and components successfully.
1. Restart your PC before windows launches, tap “F8” constantly. Choose“Safe Mode with Networking” option, and then press Enter key.

4. Search for all related registry entries infected by virus and clean them out:

Uninstalling Vista Total Security 2013 is usually not enough to get rid of this malware from your system. Most times you would notice that even legitimate anti-virus programs are ineffective in removing this rogue application. You would need to use the right tutorials to remove the fake security application with the computer running on safe mode. As soon as it has been removed, you would need to scan the computer with a legitimate anti-virus program to ensure that there are no files or components of the fake program left. Anyway, if you suffered from the rogue applications and cannot figure out how to get them off of your computer, please don;t hesitate to contact an expert for instant help.

Note: If you are not computer savvy and don’t know how to get rid of Vista Total Security 2013 Virus Firewall Alert, to save your computer in time, please contact YooCare PC experts 24/7 online to completely and safely sort it out.