What should I do with SystemBytes Win 7 2015? I don’t want it on my computer anymore, because it is very annoying and always pops up warning alerts, which seems my computer has been infected with severe infections, but when I click this security tool to remove all threats it shows, it asks me to purchase a registered version to continue, because the one running on my computer is unregistered version. I don’t find it in control panel, so how can I uninstall it completely?

SystemBytes Win 7 2015 is sorted to be fake antivirus which aims at hoaxing PC users into convincing that their computers are infected with many infections and paying money for its so-called advanced version. Like AVbytes Win 7 Antivirus 2015, Zorton Win 7 Antivirus 2014 or Zorton Win 7 Antivirus 2014 and so on, this fake antivirus also belongs to Braviax/FakeRean family of fake anti-virus programs which is mainly designed to invade computer running with operating system including Windows XP, Windows Vista, Windows 7 and Windows 8, 8.1. And this new variant mainly attacks computer running with windows 7. Many victims may believe it is a working well antivirus, as it also has functions as those professional antivirus programs have. Once this rogue SystemBytes Win 7 2015 is installed to your computer, it will be configured to run automatically as soon as the operating system runs, and each time when you start up your computer, it will soon run a full scanning automatically. When it finishes scanning, it will tell you lots of warning alerts by showing the infected files. In fact, it just displays fake security state of your computer to scare you. Those message about the threats on your computer is actually fake and even your computer is good and doesn’t have any viruses, but this fake antivirus is tricky and use this message a tactic to scare users to make them convince that their computer have been infected with virus. And when users see many threats on their computers, they will worry about their devices, so they quickly believe that is the truth. And they may follow this fake antivirus’ guides to buy a fake advanced version that will not either help to remove viruses or protect computer from being infected with infections in future. To the contrary, this fake antivirus will do more damages to computer.

SystemBytes Win 7 2015 virus is very dangerous and aggressive. It will conduct many destructive tasks on computer if you cannot deal with it in time. Every time it automatically runs a full scan, but the scanning is a fake action. The real purpose of it is to detect where system loopholes are. Then it could use these loopholes to introduce other viruses like hijacker, trojan, ransomware etc. to mess up system. Some infections may generate junk files in system and take up more and more system capacity and Internet source, and CPU usage will be higher immediately. Accordingly, computer will run slower and it’s hard to load a new tab on the browser, even browser may get crashed down. When it deeply roots into system, it will change and disable important system files or processes. In this aspect, it can disable executable files or key files of antivirus, which will destroy firewall of antivirus and disable antivirus program. That means your antivirus will be useless. Moreover, it can gradually disable windows firewall. If computer is severely corrupted, it will be hard to fix even under troubleshooting mode such as safe mode and safe mode with networking. Besides, cyber hackers may steal your personal info with help of other viruses like redirect infection, Trojan horse, randomware. Therefore, please remove fake SystemBytes Win 7 2015 timely to avoid damages and keep personal info safety.

A Screenshot of This Infection (Fake Antivirus Alert) 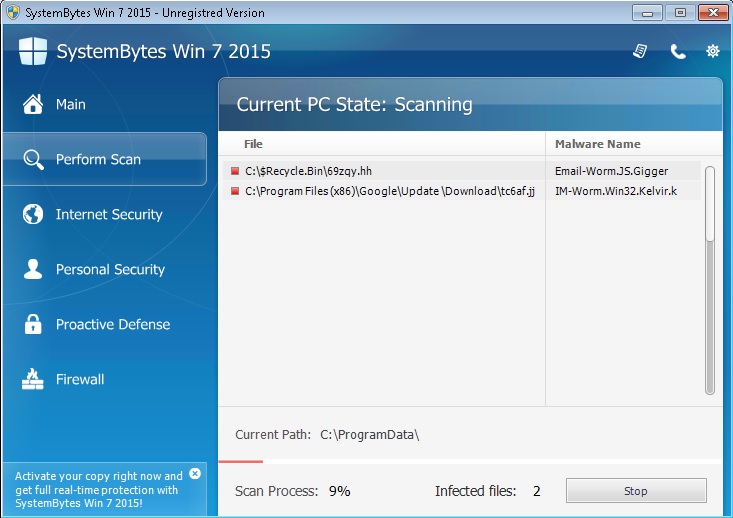 Finding all or some of these symptoms on your computer, sorry to say that your computer is infected by SystemBytes Win 7 2015 virus. Please contact YooSecurity Online PC Experts for manual removal guide. Also, we will provide a short removal guide below for computer literate.

In order to get into this mode, you should restart your infected computer and tap F8 key constantly when computer is booting back up to get safe mode options on the screen, use arrow keys to highlight the option you want to enter then press E/Enter key. * Usually, this rogue program will be disabled from automatically starting in safe modes. Users will be able to fix the SystemBytes Win 7 2015 problem without constantly blocks from the fake AV. If you are a Windows 8 user, click here and learn how to boot up Windows 8 to safe mode.

Step 2: Find Ctrl, Alt, and Delete these 3 keys and then press them together to open task manager to end the process related to SystemBytes Win 7 2015, the name of the process of it is random.

Then try to find SystemBytes Win 7 2015, highlight it and choose Remove.

Once SystemBytes Win 7 2015 virus is installed to your computer it will be configured to run automatically along with the operating system, and each time when you start up your computer it will pretend to be computer internet security software to run and display fake security state of your computer to scare you. It aims at cheating out of your money by recommending you to purchase its fake full version. This fake antivirus also performs destructive activities on your computer. This fake SystemBytes Win 7 2015 damages the main system files to make it be able to pop up even under troubleshooting mode such as safe mode and safe mode with networking. It damages some fatal system to slow down computer performance. What you should do promptly is to remove fake antivirus and install a real reputable antivirus program to protect your computer instead of a fake one.

Suggestion: To follow removal guide that mentioned above, a quite level of computer knowledge is needed. Still can’t get out of SystemBytes Win 7 2015 virus? Contact online experts for help now!