AVbytes Win 7 Antivirus 2015 alert popped up on my Dell desktop after I turned it on this morning. It covered most part of my computer screen and interrupted all actions on the target computer. I can’t tell whether this unregistered version of the program is real antivirus or fake one. It almost blocked my access to the Internet. I was freaked out with this annoying rogue program pop up and failed to close it out of the screen. I tried all anti-virus programs installed in my computer, but neither of them takes effective to deal with the rogue program. What will happen to my computer if I purchase its registered version? How can I uninstall this pesky rogue program from the computer safely? If you have tried in vain, please follow removal guide below to remove the rogue program successfully.

AVbytes Win 7 Antivirus 2015 is a risky fake antivirus that brings PC users a lot of computer damages and loss. It is designed by cyber criminals to trick unknown PC users into paying money for its none-existing registered version. Indeed, this rogue program is identified as a malicious computer virus which changes itself into various variants with different names and skins like AVbytes Win 8 Antivirus 2015, Zorton Win 8 Antivirus 2014 and Zorton XP Antivirus 2014 and so on. Such a rogue program infection is designed to target worldwide computers running with Windows 7, Vista, XP and the latest Windows 8.1 etc. Upon arrival, the fake antivirus can be installed in your computer automatically. Automatic fake security scans will run through your whole system every time you launch the target computer. In fact, the rogue program displays fake scan results telling that about 36 infections are detected in your system. According to the fake security alerts, you are required to clean those infections by activating your copyrights for the registered version of the rogue program. As a matter of fact, those detected infections are fake scan results used by cyber hackers to swindle your money. To save your computer, you should take actions to delete the fake anti-spyware from your computer immediately.

To make PC users convinced, the AVbytes Win 7 Antivirus 2015 fake antivirus is designed to share functions and features with licensed antivirus, only to fool unknown victims into purchasing its non-existing registered version without giving it a second thought. Those functions including perform scan, Internet security, personal security and proactive defense etc. are all fake and foxy, only to scam you to sign up and install its full version of program in the computer. Providing that you purchase its full version and install it in the system, you won’t clean your computer or get unlimited protection against further threats. All you install in your computer is totally computer infection which should be uninstalled promptly. Any delay of removing this rogue program will cause great damages and data loss to your computer. Such a harmful rogue program will slow down your system performance and block your access to the Internet. It also takes up high CPU usage and other computer resources. Indeed, the affected computer may get frozen up easily when you perform any actions on the system. In this case, PC users should carry out an effective manual removal way to uninstall the AVbytes Win 7 Antivirus 2015 completely.

Finding all or some of these symptoms on your computer, sorry to say that your computer is infected by AVbytes Win 7 Antivirus 2015. Please contact YooSecurity Online PC Experts for manual removal guide. Also, we will provide a short removal guide below for computer literate. 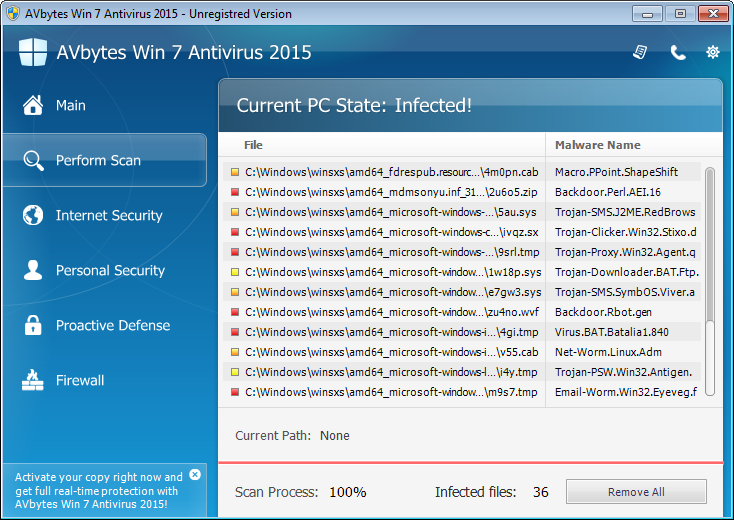 Step 2: Find Ctrl, Alt, and Delete these 3 keys and then press them together to open task manager to end the process related to AVbytes Win 7 Antivirus 2015, the name of the process of it is random.

Then try to find AVbytes Win 7 Antivirus 2015, highlight it and choose Remove.

As the above mentioned, we learn that the AVbytes Win 7 Antivirus 2015 is a fake anti-spyware which is designed to swindle unknown PC victims’ money. Its appearance seems reliable at the first sight, so as to take you into its scam. It gets installed in target computers automatically and pretends to scan your whole system thoroughly. After scanning, it reports fake scan results showing that your computer contains many infections and you need to activate the registered version of the rogue program to clean the computer. It cheats you into keeping this fake antivirus and sign up for its registered version. However, this rogue program is nothing useful but a computer virus which does great harm to your computer. In fact, the fake anti-virus software will show up on your computer every time you launch the contaminated system. It reduces your system performance and disconnects your Internet badly. PC users should not trust or keep this rogue program in your computer too long. All you need to do is to get it off your system as soon as possible.

Suggestion: To follow removal guide that mentioned above, a quite level of computer knowledge is needed. Still can’t get out of AVbytes Win 7 Antivirus 2015 virus? Contact online experts for help now!