Got a pop up that says i need to purchase XP Security Cleaner Pro Reg key? I don;t  think this is real as i have been scammed before and it seemed the last one was easy to fix, but now my husbands laptop has been hijacked by XP Security Cleaner Pro unregistered version thing, i am continually pressing F8 but it is not bringing up the task manager, is there something else i can do?

The XP Security Cleaner Pro virus is an attack that disguises itself as a legitimate security application on the users computer and notifies of a malware and viruses being detected. Why it won’t infect Vista but XP?  Like the one called Win 7 Security Cleaner Pro, the goal is to trick the user into thinking that there are potential security risks and instructs the user to upgrade to the full version in order to remove the infected files. This virus tricks thousands of consumers every day into paying for the software but they soon then find out they have been scammed and a victim of the XP Security Cleaner Pro fake virus. It is not a real anti-virus program and it cannot detect or remove any files from the computer. It is important to remove this threat from the PC as quickly as possible!

Once this attack is picked up it will begin to configure the system settings in order to launch the warning each time at start up and it will remain on the screen. Even if the PC is restarted it will display right away, and this convinces many users to pay the “upgrade fee” as they think it will remove the problem. The results that the “scan” report are made up viruses and they do not really exist on the computer. If the warning message is ignored it will then start sending out random warnings to further attempt to convince the user that their computer is infected and to purchase the full version of the XP Security Cleaner Pro in order to free the PC from possible threats. It is a very elaborate virus that will continue to attempt to steal money from the user until it is removed from the computer. 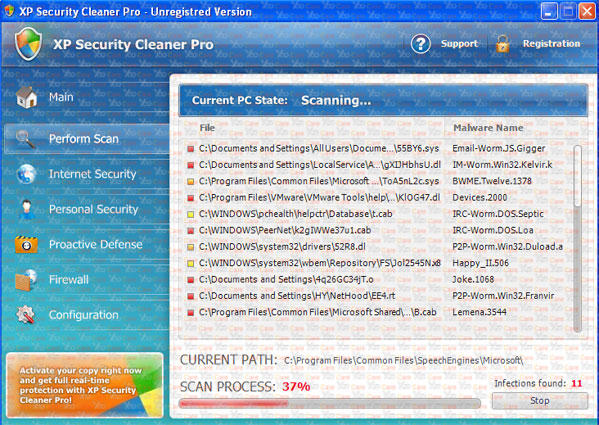 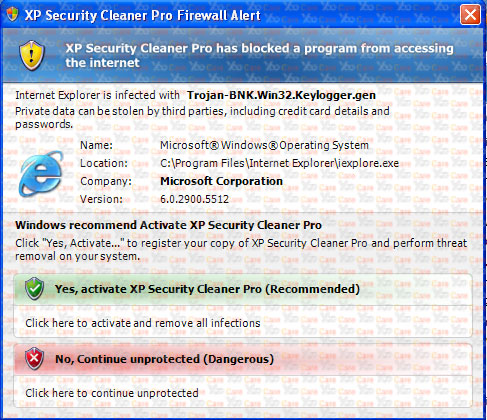 What Will XPSecurityCleanerPro Do On Your Computer Besides Block The Internet?

While the XP Security Cleaner Pro virus can give the hackers access to the system most victims report that it was just an attempt to get money and not steal information from the computer, although it can happen so as always attempt to remove the corrupt files from the PC as soon as possible. Since the virus changes the settings upon installation it will continue to pop up warning messages and error messages and even if the user pays the hackers for the software the messages will not stop. Their mission is to scare the user and bombard them with these warnings until they pay because the fake scans and warnings will continue. Hopefully the user will realize it is not real, but unfortunately many people are taken advantage of form the XP Security CleanerPro virus every day.

When the XP Security Cleaner Pro virus is first detected it is important to quickly remove the files from the PC. We suggest a manual approach, as it will force the user into looking in all areas to make sure the correct files are properly removed. For complete information see below.
Before you begin to get in safe mode with networking or safe mode with command prompt, please remember to keep hitting F8 key before Windows launches.

4. Search for all related registry entries infected by virus and wipe them out in no time:

An experienced PC user will see the warnings pop up and question the XP Security Cleaner Pro virus if they are aware that they have a different version of anti-spyware installed on the computer. It should be obvious that there is a potential threat and they will be able to quickly remove the virus from causing any serious problems. To a casual PC user they might not be aware and think tat it is the version that came with the computer and it is time to renew the license. They will pay the fee without questioning it and then realize that the warnings do not disappear and they have been scammed.