What is this Windows Web Watchdog pop up? Is it a legit program? It popped up on my laptop a few hours ago when I was trying to install a tool. Ever since then, I encounter all kinds of troubles on using my computer due to the annoying blocks by this pop up. It prevents me from using my computer and wants me to pay. I am having troubles to get rid of it. I can’t do anything on my computer. What is the best way to remove this unwanted program without erasing my personal files? Please help!

The pop-up Windows Web Watchdog is reported as an unwanted PC protection tool that can sneak onto Windows computers without permissions from their users. Once installed successfully, this program will annoyingly pop up giving users all kinds of difficulties to run on the machine. It not only prevents users from using the computer efficiently, but wants them to pay for its full version so that all the detected problems on the machine can be solved. This type of unwanted PC protection tool is categorized as a rogue antispyware which does no help in protecting your PC but is particularly designed by computer hackers to scam innocent Windows users. Computers that are infected by this rogue scam malware stay in a risky and vulnerable status which may provide potential convenience for other malware/spyware problems. Hence, this nasty pop up rogue should be removed right away once being spotted on a PC. This passage provides a general guide on how to get rid of it successfully.

Online freeware is one resource that can be taken advantages of by computer hackers to bundle with malicious programs. Through bundling with such freeware, the nasty Windows Web Watchdog rogue can be installed and popping up on your computer screen even if you have got advanced PC protection tools. It modifies the system defaults including making itself the start-up process of the system and adjusting the security settings. Each time the infected PC is started up, users will be welcome by this unwanted rogue screen. It then automatically starts non-stoppable scans through the system and reports threats on the computer. Various troubles are expected. To be specific:

How can I uninstall the fake Windows Web Watchdog virus completely on Windows?
Are you stopped from running a program or opening a file on the infected machine by constant security alerts from this fake anti-virus? Can you not access other security tools on the PC when trying to delete the malware? One obvious consequence on Windows when being hacked by the rogue is that users are often blocked from using the computer by pop up alerts. In this case, manual removal is believed to be an efficient solution. Various program files, registry keys and specific modes of Windows will be involved during the manual removal process. Unpredictable consequences may occur if you are not qualified with sufficient computer skills. Below are some basic steps on how to erase the rogue pop up manually.

Suggestions: If you are not a computer tech or don’t have lots of experience with scam malware problems, contact YooSecurity Online PC Experts now for removal help to rid this fake Windows Web Watchdog virus of PC. Some basic manual steps are also given in the following (for advanced computer users): 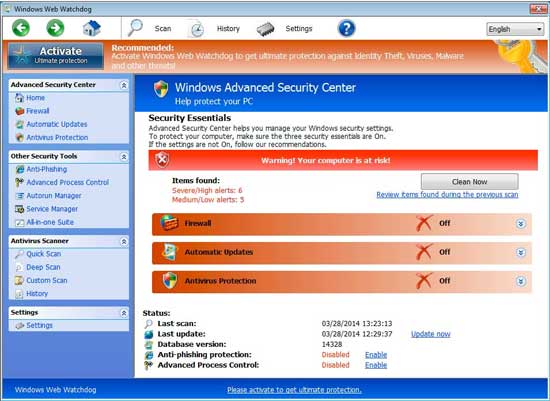 How do I remove all these annoying security pop ups?

The above message is one of the pop ups displayed by the fake AV that states your Internet Explorer may contain virus and infect your computer. The nasty rogue program is trying to compromise your computer via displaying all these false alerts. Whenever you try to start a program or open a file on the infected computer, you will be blocked by similar pop up security alerts. Ignore all these annoying pop ups as they are false reports. Remove them all by getting rid of the fake Windows Web Watchdog virus manually.

Where can I get the activate codes to fix the problems on my PC?
To stop all the unwanted pop ups, according to the rogue, you will need to active the program first. A certain amount of money can be required from users if you want to active this unknown pop up software. This is where the trick pulls off if you pay. Unfortunately, paying or activating this fake AV will not get you out of these problems but might instead cause you more troubles later on. The only way to make all the problems including the annoying pop ups and constant blocks on your PC go away is to remove fake Windows Web Watchdog scam malware manually and completely.

Restart the infected computer, tap F8 key constantly when computer is booting back up to get safe mode options on the screen, use arrow keys to highlight the option you want to enter then press E/Enter key. * Usually, this rogue program will be disabled from automatically starting in safe modes. Users will be able to fix the Windows Web Watchdog malware problem without constant blocks from the fake AV.

* Special tips for Windows 8 users: To put a Windows 8 into safe mode, press CTRL+ALT+DELETE to get the Restart option, hold down Shift key then select Restart. On the Choose an option screen, select Troubleshoot, Advanced options, Startup Settings, Restart. If you are still having troubles with the fix process on a Windows 8, contact online PC experts for help now to remove Windows Web Watchdog virus malware.

Windows Web Watchdog is a rogue antispyware that appears as a helpful PC protection tool and gets onto your computer via bundling with unknown freeware. This fake AV can give you all kinds of troubles on the PC. It prevents you from accessing the programs or your personal files on the computer. It even reports fake security alerts trying to get you to delete important programs or files off of the PC. This nasty rogue can only been seen on Windows computers so far as it has not reached to Mac users yet. By reporting false alerts to you, the malicious program is trying to trick you into paying for its fake “full version” in a way that remote hackers will benefit. This unwanted pop up program is not a reliable PC protection tool but is in fact a scam malware that needs to be uninstalled from your computer ASAP to avoid further troubles. System could be eventually crashed the longer the rogue resides on your PC.

Note: Can’t uninstall the Windows Web Watchdog pop up from computer? Can’t do anything on PC due to the constant blocks? Contact YooSecurity Experts now to get help promptly to avoid further consequences: