I need help to get rid of this Windows Prime Accelerator pop up thing from my computer. I accidentally downloaded it the other day as I thought it was legit. But ever since then, I am having constant troubles to use my computer. And I can’t even uninstall it. The malware hacks my computer and pops up every time I try to do something. It often states it’s not activated and I need to do that by paying. I don’t want this program anymore. How do I remove the pop up completely on my computer?

Windows Prime Accelerator is a newly released rogue antispyware distributed by unknown third-party online to hack into Windows computers and scam their users via displaying lots of troubles to trick them into paying an amount of money in order to get all the “detected threats” removed from the systems. This pop-up program has the regular look of an anti-virus software. But it does not belong to Microsoft or any other legit product. This type of computer scam ware has already become very common among Windows users around the globe. It’s been reported to only attack Windows OS (Windows 7, Windows XP, Windows Vista) so far. Windows users may have lots of chances to get this rogue program on their computers even when they are protected by the advanced security protection tools. The unwanted program can get onto your computers in any bundle with freeware. Once it’s on, a complete uninstall can be achieved via manual removal.

The Windows Prime Accelerator pop up is a fake AV that claims itself as a legit and helpful PC protection program. Users can get this rogue on their computers without even knowing, especially when they download unidentified files or programs from unknown resources. Via bundling with freeware, the rogue program will be able to automatically install on your PC without permission. If you can’t remove it instantly, you will be put in all sorts of troubles later on. The rogue can modify certain system default settings to make it the startup process of the infected computer. Each time the infected PC is started, the scam ware will be automatically activated and cause many difficulties for users to run on the PC:

Operations on the computer will be constantly blocked by the virus screen pop up.
Regular files and programs are reported to contain viruses.
Fake security alerts are displayed continuously.
Internet connection can be affected as well.
Computer is slow in response.
CPU Usage percentage is rather high.
Desktop icons are missing or relocated.
…

How can I uninstall Windows Prime Accelerator completely on Windows?
The rogue pop up can block almost everything you try to run on the infected computer including your anti-virus programs. And it usually won’t be uninstalled from Control Panel as many users have the unwanted program coming back again and again after they thought they had removed it. Compared to other removals, manual removal is a more effective way to get rid of this rogue from your computer. For that, expertise will be required to accurate the process of the removal as any vital mistakes could be resulted due to a single misleading step. This passage contains a guide below to manually remove Windows Prime Accelerator virus pop up.

Suggestions: Not a computer literate yourself? Contact YooSecurity Online PC Experts now for removal help. Some basic manual steps are also given in the following (for advanced computer users): 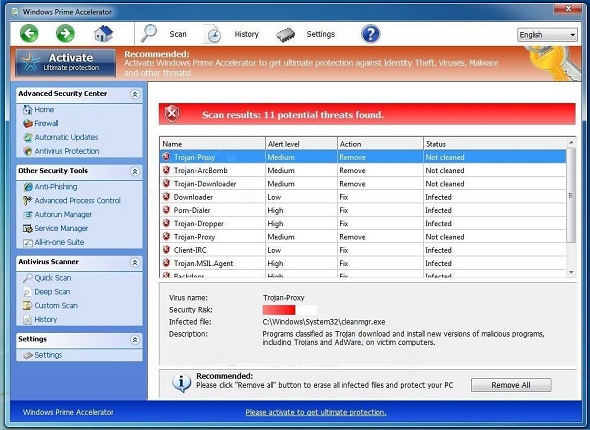 How do I remove all these Windows Prime Accelerator popups?
Once the rogue program is installed, it will not only automatically launch upon system startup, but report many potential threats inside your computer. Security popups will be displayed whenever you attempt to run a file or program on the infected computer. For instance:

Similar programs or system files can be detected to contain viruses and are suggested to be removed by this rogue. As a matter of fact, these pop-up security alerts are fake. It’s trying to confuse users and get them to delete important programs or system files on the PC. To block these annoying popups, delete microsoft prime accelerator manually from the computer now.

Where can I get the activate code?
To remove all the “detected threats” from your system, you are required to activate Windows Prime Accelerator first. A certain amount of money can be requested from you in order to complete this process. If you are tricked and believe this pop up is legit, you may want to pay and have your PC protected. However, users will not get out of any of these troubles once paid. The scam ware will be left on your computer while remote hackers have probably taken your money away. Hence, we don’t suggest victims of this rogue to pay any amount to this unknown pop up program. If it’s bugging you, uninstall this Windows Prime Accelerator scam malware ASAP!

Restart the infected computer, tap F8 key constantly when computer is booting back up to get safe mode options on the screen, use arrow keys to highlight the option you want to enter then press E/Enter key. * Usually, this rogue program will be disabled from automatically starting in safe modes. Users will be able to fix the Windows Prime Accelerator malware problem without constant blocks from the fake AV.

* Special tips for Windows 8 users: To put a Windows 8 into safe mode, press CTRL+ALT+DELETE to get the Restart option, hold down Shift key then select Restart. On the Choose an option screen, select Troubleshoot, Advanced options, Startup Settings, Restart. If you are still having troubles with the fix process on a Windows 8, contact online PC experts for help now to remove Windows Prime Accelerator fake pop up.

Alternatively, you can view this fake AV removal video guide directly on our website.

The Windows Prime Accelerator pop up is categorized as a rogue antispyware even though it looks legit to most Windows users. This rogue software is distributed by unknown online third-party with the purpose to scam innocent PC users. Once the program is installed, it will cause many troubles on the PC making users uncomfortable but unable to use the computer properly. It not only blocks almost every action on the PC, but displays annoying alerts to convince users that their PCs are infected by threats. To get help from this program, one can be asked to pay to get the “registered” version of the scam program which doesn’t even exist. To remove the pop up from your computer successfully, get rid of the rogue as soon as possible via manual removal now!

Note: Having troubles to understand the guide? Can’t get rid of Windows Prime Accelerator virus pop up successfully? Contact YooSecurity Experts now to get help to secure your PC from potential threats: