I picked up this Win 8 Antivirus 2014 on my Dell laptop running with Windows 8 when I was opening an unknown email attachment. I have tried hours to uninstall the pop-up rogue program from the control panel, but the fake antivirus kept showing up on the computer screen and blocked my action to deal with it. I was really annoyed at getting this fake antivirus alert every time I launched the system. I doubt whether those detected threats exist in my computer or not. Really, neither this unregistered version of rogue program nor its full editor do I need on my computer. What can I do to remove the fake antivirus from the system? I do need some advice on this rogue program removal. Please help!

Brief Introduction to This Win 8 Antivirus 2014

Win 8 Antivirus 2014 is identified as a risky computer virus scam designed by cyber criminals to gather money from unwary users illegally. It is a newly released fake antivirus which has targeted worldwide computers. The virus infection can be changed into many vicious variants that are capable to affect computers running with Windows 7, Vista, XP and the latest Windows 8.1. It performs same harmful actions on the target computer as Win 7 Protection 2014, Vista Antivirus 2013 and XP antivirus 2013 do. Besides, the fake antivirus infection can be promoted through Trojan viruses, and it mainly spreads through hazardous sites, random popups and doubtful freeware downloads and so on. Actually, it can come bundled with many additional threats like adware, worms, malware and spyware. Upon arrival, the rogue program is installed in the computer automatically and pops up bogus security scans on your computer. After scanning the system, the rogue program reports that your computer is at low security level and it contains many malicious threats. It fools victims that the only way to clean your computer and get further unlimited protection against threats and bank account fraud. However, this rogue program is a horrible computer malware which displays fake and fraudulent security alerts to scam your money. Consequently, the fake anti-virus spyware becomes an urgent case that should be resolved effectively.

This Win 8 Antivirus 2014 turns out to be a malicious virus infection that brings great damages to the affected computer. As designed, the rogue program is hardly to be closed or disabled. PC users can be freaked out with the pesky automatic security scans and constant pop-up ads and messages on the screen. You will be uncomfortable with online activities, as the fake antivirus hijacks your Internet browsers to trigger random redirect issue. You may have to wait for a long time till the web pages are well loaded on the web browser. Such a rogue program is always running as a startup program that takes up the CPU usage greatly. It causes your computer to have slow system performance and constant freezes. That is why the computer takes a long time to start up or shut down. To make it worse, the rogue program won’t allow you to run your Windows applications or other normal programs properly. Your firewall and anti-virus software can be blocked by this rogue program. In this situation, PC users should be aware of high threat level of this Win 8 Antivirus 2014 virus scam and remove it from the computer manually at an early time.

Finding all or some of these symptoms on your computer, sorry to say that your computer is infected by Win 8 Antivirus 2014. Please contact YooSecurity Online PC Experts for manual removal guide. Also, we will provide a short removal guide below for computer literate. 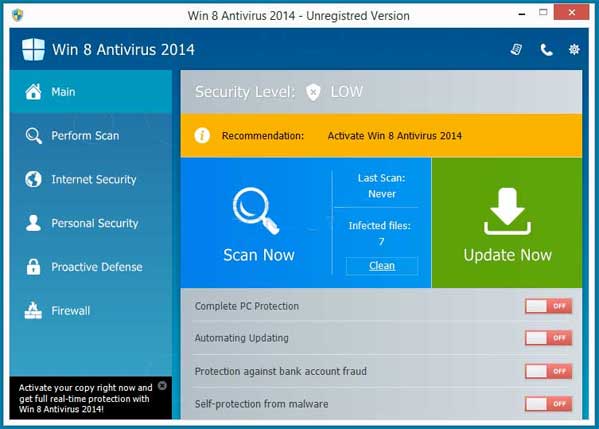 Restart the infected computer, tap F8 key constantly when computer is booting back up to get safe mode options on the screen, use arrow keys to highlight the option you want to enter then press E/Enter key. * Usually, this rogue program will be disabled from automatically starting in safe modes. Users will be able to fix the Win 8 Protection 2014 problem without constantly blocks from the fake AV. If you are a Windows 8 user, click hereand learn how to boot up Windows 8 to safe mode. 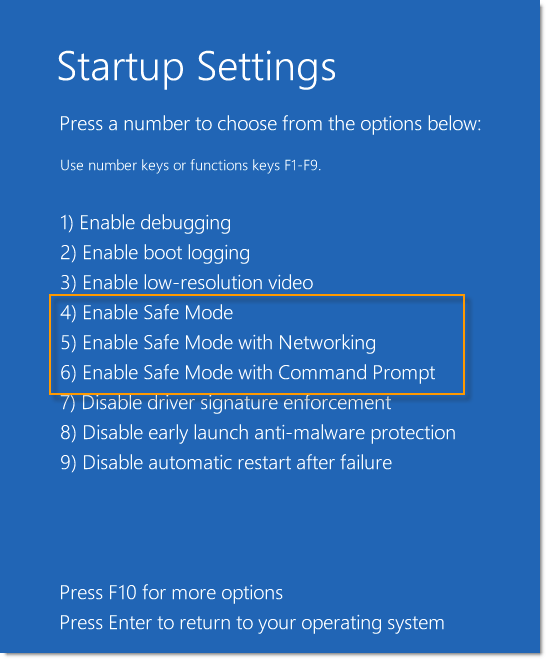 Step 2: Find Ctrl, Alt, and Delete these 3 keys and then press them together to open task manager to end the process related to Win 8 Antivirus 2014, the name of the process of it is random.

Then try to find Win 8 Antivirus 2014, highlight it and choose Remove.

PC users who pick up this unregistered version of Win 8 Antivirus 2014 should not purchase its non-existing registered version or install it in your computer. All you need to do is to uninstall this fake anti-virus spyware from your computer completely and quickly. Because any delay of the rogue program will lead great damages to target computers. This rogue program is nothing legitimate or useful, but it is a tricky computer virus scam designed to swindle money from unknown victims. Upon installation, the fake antivirus will keep popping up on your screen to block most of your actions on the contaminated system. It displays fake automatic scans through your whole system. By this way, the rogue program claims that your computer is not well protected and you are required to activate the full version of its program. Unfortunately, you will suffer from great loss if you ever fall into the virus scam. You also find it unable to get rid of the pesky rogue program via your advanced security programs, for the virus infection blocks functions of your normal programs. It is quite necessary for users to uninstall the fake antivirus from the affected computer manually and promptly.

Suggestion: To follow removal guide that mentioned above, a quite level of computer knowledge is needed. Still can’t get out of Win 8 Antivirus 2014 virus? Contact online experts for help now!