What can I do to remove Windows Antivirus Machine virus?

Have you heard of this fake anti-virus program called Windows Antivirus Machine? It attacks your computer in windows 7, Windows Vista or Windows XP. Many people have read through the websites online on how to remove this virus manually and they can’t seem to get it off. Well, here is some instructions for you to remove such a fake warning alert.

What is Windows Antivirus Machine?

Windows Antivirus Machine is known as one of the fake anti-virus programs from the Rogue.FakeVimes family. It has just been reported to attack many innocent computer users worldwide likes Windows Custom Management. You may think of it as an updated version of Windows Custom Management. This rogue as usual has a deceitful appearance in order to dress itself up like a legitimate PC system protection software. But it is definitely not friendly according to many of its victims. Its final goal is to collect as much money as possible from vulnerable computer users by boasting. It is said to be an Internet crime that has been quite popular in these days.

The most popular way to be infected with Windows Antivirus Machine is via the help of Trojans in system backdoor activities. Once being infected, this rogue will boast to you that there are many problems in your computer and it can help to remove the viruses, bugs and malware found in your computer, optimize and speed up your computer system and provide an overall protection from then on. It is said that no anti-virus applications can remove it and it will just appear each time after you reboot the computer. As soon as the reboot is done, it will run a fake checkup through your computer without your permission. Then it states your computer is full of critical errors, viruses, malware and other problems that will do harm to the system. But none of the above truly exists. By saying that, this badware is trying to grab your nerves and then strongly recommend itself to you as an authentic malware remover. But you will be asking money to pay for the full version of Windows Antivirus Machine so that it can completely help you remove all the detected errors and bugs etc. Even if you do make the payment, it is not only useless in removing those viruses, but may also cause a lot more damages to your system. Therefore, it is without any doubt that this virus should be removed as soon as possible. 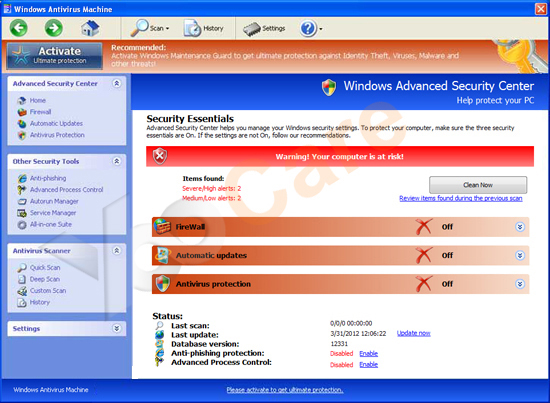 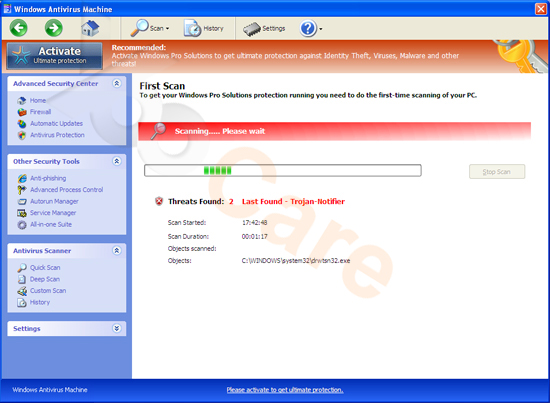 How Do I Get Windows Antivirus Machine Off My PC to Stop Blocking Me From The Internet?

Your laptop has the Microsoft Antivirus Machine virus and its been completely locked. Windows Antivirus Machine is stubborn and it disabled your task manager and registry editor. You didn’t realize it is easily to fall into its trap. Although you have anti-virus installed, but your system still be attacked by such kind of malware. It keeps popping up some alerts, which make you become nervous. If you are not good at dealing with computer problems, you’d better work with professionals who can help you completely fix a horrible situation. So generally speaking, you have to take an effective way to deal with this issue. Please do a backup beforehand and then follow the helpful instructions below:

All associated files of Windows Antivirus Machine virus should be deleted absolutely.

Attention: As what you can see, Windows Antivirus Machine is really a very horrible virus which can finally destroy your computer system. And please don’t consider auto delete method since there is no such anti-virus can really remove Windows Antivirus Machine completely. Don’t download free software to take a chance. This can only waste your time and bring in much more viruses. All the instructions above are prepared for those who have much computer knowledge and are familiar with this kind for virus. Before you start to do the removal work, please consider it seriously. On the other hand, all the instructions above is aim at the common infection situation. As for Windows Antivirus Machine, there are many variables according to different computers. What’s worse, as time goes by, Windows Antivirus Machine may start its variation. Just like what is mentioned above, this virus infection is a cascaded infection. The related files may be changed. Unless you have learned very deeply about this virus, it’s very hard for you to do the removal work. YooCare PC online service is sincerely recommended to you: