The application does not have a database and so has no capacity to scan, detect, treat or delete any virus from the computer system. The whole scans and threats reported are all faked. The aim of the creators of the program is to get you scared so that you would want to clean out the system using the application. Once you try to do that you would be asked to pay to get thee licensed version of Vista Internet Security 2013 virus firewall alert. However, there is no licensed and they are only out to steal your money.

Vista Internet Security 2013 is one of many other fake programs listed under the Baravaix virus family. These malicious programs would steal your money for a licensed version that doesn’t exist and would also give hackers access to some of your personal information. It is thus important to clear off this application as soon as you notice it on your system. 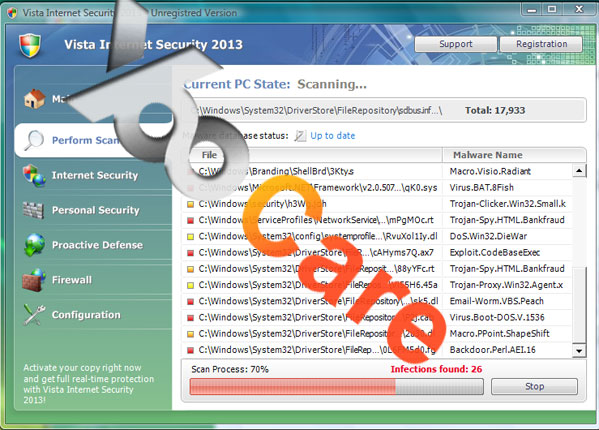 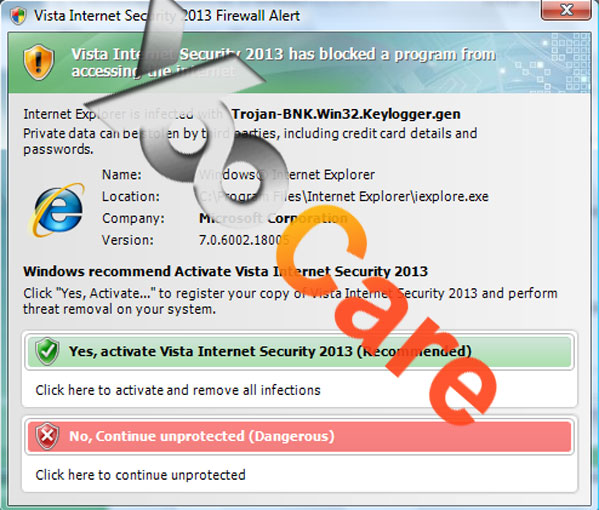 How Vista Internet Security Virus Firewall Alert Gets On Your Computer?

Vista Internet Security 2013 virus firewall alert is designed to sneak onto a computer system without the computer user being wise about it. It is packed along with a Trojan virus and sneaked into different forms of downloadable content online. It could be inside freeware, shareware, video codec, software updates, spam email attachments and many more.

Vista Internet Security 2013 is a fake program and so needs to be removed as soon as it is detected. Do not make the mistake of purchasing the licensed version because it doesn’t exist and would only give hackers access to your payment information. Since this bogus thing stopped users running the programs on the infected computers. Then, manual removal of Vista Internet Security Virus Firewall Alert is the best way.

4. Search for all related registry entries infected by this fake antivirus virus and wipe them out:

To remove Vista Internet Security 2013 virus firewall alert from your computer system you would need to take a quick time to follow the guide before the virus changes its location. If you thought to take an effective anti-virus program should remove the rogue anti-virus program, then it is a waste of time as it disabled the task manager and registry editor. Your regular anti-virus would usually be ineffective because the fake application would have long disable it or would prevent it from opening. If it does open, you can use it to scan your system and you would notice that it list this fake program as a threat to the system although it would not be able to remove it from your system. So learn more here, if you have problems with the fake antivirus, the best and easiest way to save your computer is to consult with a PC expert for instant assistance.

Note: If you are not computer wiz and don’t know how to get rid of Vista Internet Security 2013 Virus Firewall Alert, to save your computer in time, please contact YooCare PC experts 24/7 online to completely and safely figure it out.