How do you feel when you saw Vista Antivirus Pro 2013 Scam the first time? Did you think it’s a useful anti-spyware or optimizer? Have you already been tricked by this stuff? Well, it’s not too late to remove it from your computer with a safe method now.

What can Vista Antivirus Pro 2013 Scam Do to Your PC?

Vista Antivirus Pro 2013 Scam, with a fraudulent name and GUI, makes people think it’s a legit and strong computer baseline shield. However, it does completely opposite things to people. That means it doesn’t provide you any protection to your computer, instead, it may place your computer in a bad condition. The annoying virus at first makes your real protection software unavailable by violence, and then it takes place of it as if it’s a much better program to give your computer a complete protection. If you really believe that, you are fully wrong.  A virus like Vista Antivirus Pro 2013 takes the usual trick to reach its goal.

When it enter your PC, it takes over of your legit antivirus and starts to give out a report with a fancy and standard interface alerting you that your computer has been infected with much virus. Then it will pretend as if it’s scanning something which is of course nonsense, even, it won’t do anything of scanning. What the information shows you just want to make you be convinced. Then after not a long time, it will display that your computer is in very dangerous state that your computer has so much viruses. The first reaction of you may be like this: “Oh my god, how could it be? How did I get that stuff?” Don’t worry about it; all those displayed viruses don’t exist in your computer at all. “You should remove all those viruses by using Windows Ultimate Security Patch as soon as possible” this is the further alerting information after the Vista Antivirus Pro 2013 Scam finish so called scanning.  And when you really want to use Vista Antivirus Pro 2013 to do that, it will tell you that you don’t have the authority to do that before you obtain the full version. That means you have to pay money to buy this fake program. This is also the final purpose of this malware.

It is worth mentioning that is similar to many other malwares or maybe just the name is different. Now it’s launching a global offensive.  Be careful of your activities whenever you are using your computer. The virus may be concealed in some place to attack your computer. Be cautious when clicking links. It can point your browser to download threats or visit malicious web site. Maybe you have been caught by Vista Antivirus Pro 2013 Scam now, please follow the next passages to do whatever you can to delete it soon. 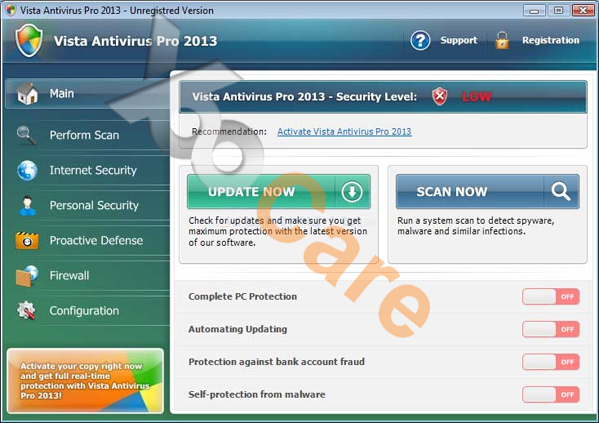 Step 3: Press Ctrl+Alt+Del keys to open the Task manager to stop the progress of Vista Antivirus Pro 2013 fake malware virus. Because the name will be changed fast, it will be displayed with different names with random letters.

Step 4: Delete all the files related to Vista Antivirus Pro 2013

Login to profile in which you are getting Vista Antivirus Pro 2013 Fake…
Go to my computer
Then press ALT button once
Go to tools on menu bar
Goth select Folder options…
Click on view tab
Select Show hidden files, folders, and drives
Click OK button

Kindly remind: Don’t think that this notorious Vista Antivirus Pro 2013 will leave your computer as time goes by. And be aware that this fake malware can not even provide your PC any protection. What it can gives to you is only harm and damage. Don’t waste even a penny on it. When you realize what it is one day, you will be very remorseful. Never believe those so called free software! Don’t download to install those stuffs in your computer. They can not only remove the Vista Antivirus Pro 2013 Scam for you, but also bring you much more other virus such as ransomware, scam virus even fake things. You may not be aware that those so called free software can be another cheater, which will make you gain just more loss. Please don’t take a chance to have a try. It’s nonsense. There is no free lunch! If you really can’t remove it yourself, please find an expert for assistance. This is the best choice.

All for your sake: to contact an expert such as YooCare/YooSecurity for professional service is well recommended if you really don’t know how to remove Vista Antivirus Pro 2013 fake malware: