Are You Still Confused by POLITI Kongeriget Danmark Virus-Asking For Ukash Code?

Many Danish people may be familiar with POLITI Kongeriget Danmark Virus since it’s launching an attack to Danish computer users on a large scale. However, you also may be suspicious if this is really a warning from POLITI Kongeriget Danmark or not. The appearance is so compelled and serious. PC users will be afraid when they get such virus in their computers. They may think that if it’s really from the police office and if they don’t pay the fine, they will be arrested and jailed. However, it’s thoroughly a computer virus, not a warning from the government. PC users in Denmark please be on the alert. Don’t be fooled by its trick!

Tips: A manual removal guide will be list below. However, the instructions are for those who are very familiar with POLITI Kongeriget Danmark Virus. If you are not confident to get rid of it, you can contact YooCare/YooSecurity for help: 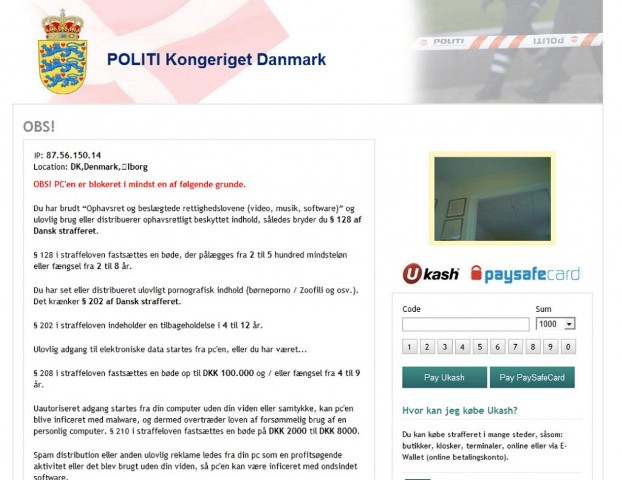 Step 3: Press Ctrl+Alt+Del keys to open the Task manager to stop the progress of Fake POLITI Kongeriget Danmark Scam. Because the name will be changed fast, it will be displayed with different names with random letters.

Login to profile in which you are getting POLITI Kongeriget Danmark Ransomware…
Go to my computer
Then press ALT button once
Go to tools on menu bar
Goth select Folder options…
Click on view tab
Select Show hidden files, folders, and drives
Click OK button

Please bear in mind: POLITI Kongeriget Danmark Virus should be removed as soon as possible. If you leave it alone, it will not only stay in your computer, but also can put your IP in very dangerous condition. However, if you can remove it in time, it can’t do any harm to your computer and won’t ask for money any more. Also please don’t pay money to this scam, even if you pay to the hackers, they won’t unlock your computer. Never believe those so called free software! Don’t download to install those stuffs in your computer. They can not remove the POLITI Kongeriget Danmark Virus malware scam for you, but also bring you much more other virus such as ransomware, scam virus even fake things. You may not be aware that those so called free software can be another cheater, which will make you gain just more loss. Please don’t take a chance to have a try. It’s nonsense. There is no free lunch! If you really can’t remove POLITI Kongeriget Danmark Virus yourself, please find an expert for assistance. This is the best choice.

All for your sake: Contact an expert such as YooCare/YooSecurity for professional service if you really don’t know how to remove POLITI Kongeriget Danmark Virus scam that asks for Ukash code: