My computer is always given an auto full scan by My Safe PC 2014 as soon as I start it up. Every time the scan finishes, it lists so many alerts that I am so afraid my computer has been in such a dangerous situation. But I don’t want to pay for the activation of its full version or function as I don’t know if this antivirus is a good one or a fake one. It locks my access to my computer in normal mode. It seems if I don’t pay it, it won’t let me go online. What should I do?

Descriptions on My Safe PC 2014

My Safe PC 2014 is not a real antivirus program which often helps people detect any threats and viruses from infecting their computers. It is indeed rogue software which installed in to computers without the permission of computer users. It launches a fully scan as soon as it is installed on computers. Then it pops up many warning messages in red color saying that your computer has been infected with some viruses. It gives out the paths of those “viruses”. It looks so real that most computer users trust this malware and pay it.

However, this fake program will not protect your computer from being infected because its real target is to use the fake alerts to make you believe in it and pay to activate its so-called full version or complete function. But it does not have the ability to detect viruses. All it has is an appearance of normal antivirus software. Rather than giving you any positive advice to defend your computer My Safe PC 2014 only gives you much false information to mislead you into a meaningless payment.

This rogue software often attaches to many free or unsafe programs that can be downloaded from the internet. Or you may get it from unknown attachments from strange mails. My Safe PC 2014 has the capability to install automatically and forcefully. You don’t have a clue on how and when it is installed. All its actions are quite mysterious and no indications show its validity. Then what does it do under its fake appearance? This rogue antivirus will ban the accesses to any processes on your computer and some people find it impossible to end its process from task manager. Not to say remove it. Even some victims have normal antivirus can be infected with this fake programs that is because it can make itself get out of the notice of your antivirus and get installed in quite secret way. It on one hand bans you to remove it by disabling many normal functions of your computer thus your system is under no protection. It can be much more easily to be invaded by online spread viruses.
Notice: Have no idea on how to remove this unwanted software from your computer since real antivirus programs have failed to do the job? Cannot seem to stop this program from popping up constantly? Manual removal will be suggested here as it’s guaranteed on a complete removal (advanced computers skills required). Contact YooSecurity Online PC Expert right away for instant assistance. 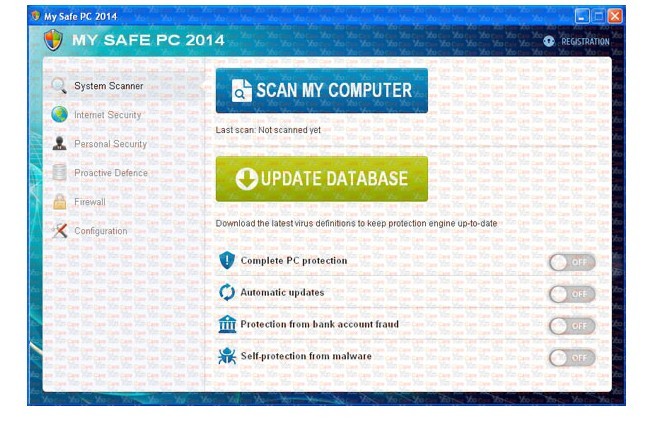 Screenshot on Firewall Alerts of the Fake Antispyware 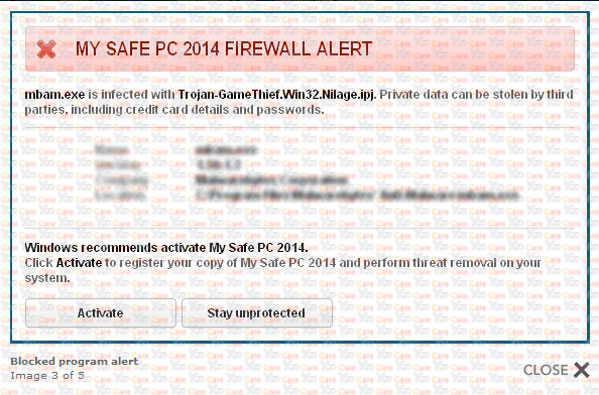 Consequences brought up by this nasty program:

A) It disables some functions of the computer to change the operating environment for its own good. B) It bans computer users to access to their computers when it is doing a scan.
C) It gives out constant popping ups of fake alerts to claim your computer is in danger and you need to pay to activate the full function to make your computer be protected.
D) It makes your computer system even more vulnerable to be invaded by other online viruses.
E) Personal privacy may be affected as well.

How to Remove the Rogue Anti-spyware Completely?

Up till now, no antivirus seem to work excellent on removing this rogue anti-spyware software because it has been updated by cyber criminals to escape from the notice of any normal antivirus programs. It disables some basic functions of your computer and you cannot go online via the infected computer in normal mode. So manual removal becomes the most effective and safe way to get rid of this fake antivirus.
Step 1: Unplug the internet cable then restart your computer normally. After you can see the desktop you can plug in the cable again. If the virus doesn’t pop up, you can continue from step 3. (If it’s wireless connection, turn off/on instead of plugging in/out cable)

Step 3: Press Ctrl+Alt+Del keys to open the Task manager to stop the progress of this rogue antispyware virus. Because the name will be changed fast, it will be displayed with different names with random letters.

Step 4: Delete all the files related to this malware

My Safe PC 2014, categorized as a rogue antispyware takes gaining money from computer users as its real target. What it always do is using some fake infection alerts to freak computer users out then ask them to pay it in order to get its full function run to protect their computers. Otherwise, it seems impossible for you to skip its warnings to use your computers. It disables many functions of infected computers so you cannot go online via it or download any true antivirus programs to remove this one. It just bans you to use your computer correctly. Each time you start up your computer it can run automatically so you cannot ignore it. Nor can you use your computer as usually. In case it makes more and more damages to your computer while your system is under no protection, you should remove the virus as soon as possible.

Special Tips: If you have no idea to get rid of the fake antivirus malware completely from your computer, contact YooSecurity experts 24/7 online in time for professional service to make your computer green.