I’m facing with a thorny problem that I can’t uninstall Antivirus System fake thing from my computer. I don’t know how I got this hateful thing but I think it’s from the Internet. I remember yesterday I downloaded a document from a inglorious web site. Then something popped up to let me install. I clicked yes so I think that’s why I got that thing. It asked me to purchase it. Now I can’t open any programs. Why is that? I have tried something myself to get rid of this fake thing but no good luck. It’s still there. How can I remove it without restore my computer?

Is Antivirus System A legitimate Program?

Antivirus System is a malware in the disguise of an antispayware to scam people for money. It has been designed as the same looking as many famous anti-virus software.  However, it’s a fake thing which doesn’t have any protection functions. It disguises as an anti-virus to cheat people to pay money. It widely spread all over the world in 2013. This program is classified as a rogue as it displays false information in order to trick you into purchasing the program. The interface of it looks like legit, friendly and helpful. In fact, it absolutely plays a role of villain. Antivirus System is a virus indeed which hides on malicious websites or in bundled downloads, camouflaged as fake video codecs or spam email attachments. Antivirus System Malware prepares to attack PCs anytime once it gets an opportunity. The chance can be one of your careless operation such as a visit to some malicious sites, click a cataleptic video or advertisement link, etc. No matter in which way, it will be automatically installed in your computer without your notice and permission.

As long as the rogue Antivirus System fake is installed in your computer it will be configured to start automatically when Windows starts. Every time you start your computer, it will run as computer internet security software by pretending to scan and kill virus for you. After not a long time, it will pop up a fake scan alert notification claiming that your computer has been infected much virus and your computer is in extremely dangerous condition. If you attempt to use Antivirus System to remove these infections, though, it will state that you firstly need to purchase it before it can do so. This is a scam as the scan results are all fake, and in many cases, the infected files do not even exist in your computer. What is worse, it blocks legitimate Windows applications. It will also block many of the infected computer’s normal functions, for example, Windows Task Manager and Registry editor. Therefore, please ignore the scan results. Do not waste any of your time with Antivirus System malware, and, most importantly, do not spend any money on its “licensed version”, because this antispyware application is completely fake.

Some alert information of Antivirus System Malware may be like this: “C:\Windows\system32\ is infected with “W64.Xpiro Trojan”. Do you want to register your copy and remove all threats now? If you click “Remove” button, you will be redirected to payment site. Antivirus System is unable to detect and remove any infections, so do not pay for the bogus software; simply ignore all what it will display to you. If you enter your bank information as requested by it, your money will be stolen from these cyber criminals who designed this program to record track of your credit card account. Anyway, you have to remove this Antivirus System malware as soon as possible.

Tips: Removal work is a tough job especially for this fake anti-virus. You need to do this with professional skills. If you are not confident to get rid of Antivirus System, you can contact YooCare/YooSecurity for help:

A Screenshot of Antivirus System fake 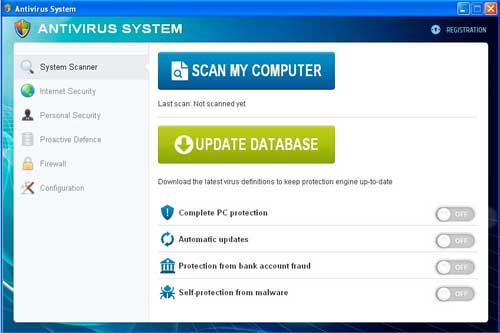 A. Your previous formal anti-virus programs will be replaced by Antivirus System fake.

D. You almost can’t do anything freely with the virus in your computer. Antivirus System will block almost all programs running.

E. The fake slows down your computer.

Step 3: Press Ctrl+Alt+Del keys to open the Task manager to stop the progress of Antivirus System. Because the name will be changed fast, it will be displayed with different names with random letters.

Login to profile in which you are getting Antivirus System Fake…
Go to my computer
Then press ALT button once
Go to tools on menu bar
Goth select Folder options…
Click on view tab
Select Show hidden files, folders, and drives
Click OK button

Kindly remind: When you got this Antivirus System Fake infection, you always can’t run any programs. This means you can’t download software to install. So you can’t even run a real anti-virus to start a scan. What’s worse, at present, no such perfect anti-virus can remove this virus completely. If you someone is familiar with the virus and has much computer knowledge,  you can follow the steps above to remove the virus. However, usually, all the associated files of the virus would be named randomly. That is to say, different computers may have different file names. So to distinguish the files of the virus is the real hard job. For safety and convenience, to find an PC expert to help you remove this virus is your best choice.

Tips: To contact an expert such as YooCare/YooSecurity for professional service will make you at ease if you really don’t know how to remove the Antivirus System fake: