What web page will you see if your PC is seized by the police? Joint Chiefs of Staff Virus with message “The work of your computer has been suspended on the grounds of the violation of the law of the United States of America” block your computer asking to pay $400 thru moneypak? Is there really a spyware that blocks you from your homepage until you pay $400? or scam?

How to Unlock Computer From Joint Chiefs of Staff Virus $400 Moneypak Scam Notice?

Joint Chiefs of Staff Virus (JCS virus scam) is a ransomware attack hoax that targets computers located in USA. It freezes or shuts down users PC and then begins to display warnings that “The work of your computer has been suspended on the grounds of the violation of the law of the United States of America”. Is this thing from United States Department of Justice or FBI ? Of course not. The Joint Chiefs of Staff Virus is one of the very popular computer locked viruses in the long line of moneypak ransomware attacks. This ransomware first locks down user’s computer and then displays a fake message claiming to be from the Joint Chiefs of Staff, stating that the computer owner have been watching and/or distributing child pornography, downloading and sharing pirated music and video files or using unlicensed software and therefore has been blocked. You have to pay a non-existing fine of 400 USD within 48 hours as the virus locks the computer from accessing any programs or files. What you received on the screen is bogus notification.

Instead of your desktop but a payment instruction was noticed over the whole screen from Joint Chiefs of Staff.  From the lock screen you can see users must pay a fine of $400 in order to unlock their computers. The virus also controls the webcam on the infected computer and displays the video real time within the message. This makes the message appear to be more serious and it does a very good job at scaring the user into thinking that they are indeed in trouble. Furthermore, if you don’t pay the fine within 48 hours, you are going to be arrested.  Don’t worry about this warning screen as Joint Chiefs of Staff Virus actually is a virus, moneypak scam. You won’t go to jail or get any trouble from JCS police. But the virus will mess up your computer, freezing down the whole system, please remove Joint Chiefs of Staff Virus $400 Moneypak Scam and unlock your computer before it did further damage. 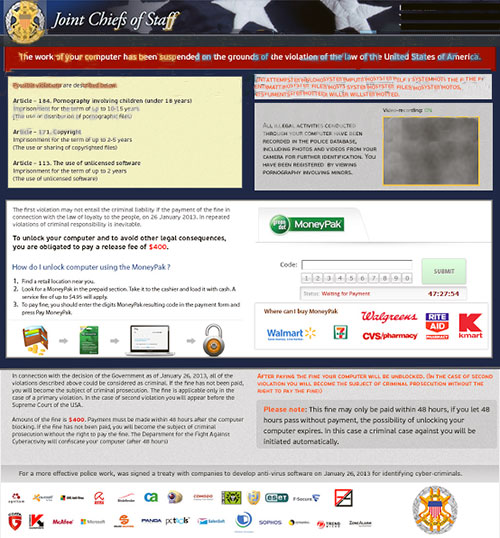 Symptoms or Harmfulness of Joint Chiefs of Staff Malware Scam

This really scares many people into paying this “fine” as they do not want to face additional trouble! The hackers require the payment is made through a moneypak code, which is a form of prepaid payment. This is a huge red flag and should alert the user that something is not right. First off, the Joint Chiefs of Staff isn’t going to lock a users computer and they surely are not going to request payment be made over the Internet using a prepaid method. The hackers do this because once the payment is sent there is no way to retrieve it or dispute it. Once it is sent it is gone forever. The Joint Chiefs of Staff Virus displays the following notification:

The work of your computer has been suspended on the grounds of the violation of the law of the United States of America.

Possible violations are described below:
Article – 184. Pornography involving children (under 18 years)
Imprisonment of the term of up to 10-15 years (The use or distribution of pornographic files)

To unlock the computer you are obliged to pay a release fee of $400. You must pay the fine through MoneyPack.

To unlock your computer and to avoid other legal consequences, you are obliged to pay a release fee of $400. Payable through Money Pack (You have to purchase Moneypack cared and enter the code). Moneyapak is available at thousands of of locations, including safeway, Save Mart, and Albertsons. Find a location near you now.
You have 48 hours to pay the fine. If the fine has not been paid, you will become the subject of criminal prosecution without the right to pay the fine. The Department for the Fight Against Cyberactivity will confiscate your computer and take You to Court.

Since the Joint Chiefs of Staff Virus $400 Moneypak Scam places itself into the PC system and totally blocked your computer. Removing the virus manually is always the best option as you can’t do anything at the moment. YooCare/YooSecurity provides the most professional online PC service. YooCare experts can plan out a solution to access your computer in safe mode with networking at first. When it’s possible to do that, their experts will do as follows:

Step B: Press Ctrl+Alt+Del keys to open the Task manager to stop the progress of Joint Chiefs of Staff Scam Malware. Because the name will be changed fast, it will be show with different name.

The Joint Chiefs of Staff Virus $400 Moneypak Scam malware doesn’t attempt to destroy the computer system like many of the other viruses. The hackers have just one goal with this virus, and that is to infect as many computers as possible in an attempt to get a large percentage to send them the money. This virus alone is responsible for scamming millions of dollars from unsuspecting PC users that fall for the scam each year.

Up to now you realized Joint Chiefs of Staff Virus is a big blatant scam put together by cyber criminals, it tricks hundreds of thousands of common users every day into sending money. Although your computer has been blocked by something that looks like legit(actually it is fake), never send money to someone you do not know through the Internet if he/she asks for payment, and the fact that real police won’t scare you and won’t require anyone for a prepaid payment. That is what the hackers always do to steal people’s money. The only way to regain control of the PC and stop the computer block is to remove the virus files.

Special tips: Spending a lot of time fixing your computer with no success? Don’t want to get things worse, please contact PC experts now to unlock your computer and remove Joint Chiefs of Staff Virus scam safely and completely.