What Is GreenDot MoneyPak Virus? How to Remove?

The GreenDot MoneyPak Virus, also referred to as the GreenDot MoneyPak ransomware or FBI virus, is a Trojan horse that locks the computer screen and displays a warning message that is designed to appear as if it is being sent by the FBI, accusing the computer of being involved in copyright violations, SPAM emailing, and the distribution of pornographic content. This is done in order to convince the user to pay a fine of $100, $200, $300, $400 or $450 depending on the version of the FBI moneypak virus that is installed on the computer. The GreenDot MoneyPak virus got its name because the hackers demand that payment be made in the form of a MoneyPak card, which is a prepaid loadable card that allows the holder to transfer money using a numeric code.

There are several different versions of this GreenDot MoneyPak virus, but they are all similar for the fact that they all claim to be from the FBI, and they all demand that the fines are paid through MoneyPak. The only things that differ are the amounts that the fine requests (anywhere from $100 to $450) and the design of the warning page. Different versions will have slightly different graphics, although they will all display the users IP address and location. The virus will also hijack the webcam on the computer and display the live video feed within the message, alerting the user that the FBI is watching and using the video to help identify the owner of the computer. Of course the warning states that if the fine is paid quickly there will not be any additional criminal prosecution, in an attempt to scare the user into paying immediately. How do you unlock your computer from the fake FBI warning screen? You need to remove GreenDot MoneyPak Virus manually from Windows XP, Vista, Windows 7 or Windows 8 as soon as possible to keep your computer from the scared warning notice. 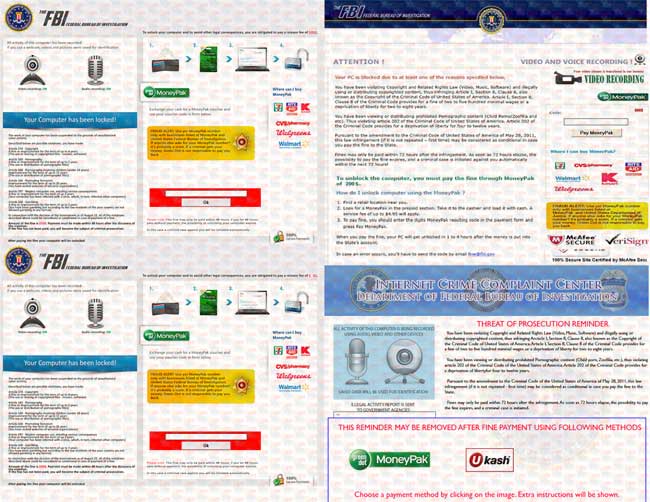 The Green Dot MoneyPak virus warning message looks like this:

So, why would someone fall for this scam and send in their hard earned money in the form of a prepaid money transfer? It has a lot to do with how the user could have potentially become infected with the GreenDot MoneyPak virus. The most common forms of contracting this threat include opening an email attachment that the virus was placed in, or by downloading a free file or piece of software that included the Green Dot MoneyPak virus in the installation. Users that get infected this way have obviously been participating in sharing and downloading pirated software, and one of the claims from this virus is that there were copyright violations. So, the fact that the user knows they have done something wrong lends them to believe that it might in fact be an authentic message.

Computer locked up saying FBI illegal downloading what does it mean? It means your computer is blocked by spam child pornography FBI paying a fine threw Moneypak for illegal download. Since the GreenDot MoneyPak Virus places itself into the PC system and totally blocked your computer. Removing the virus manually is always the best option as you can’t do anything at the moment. YooCare/YooSecurity provides the most professional online PC service. YooCare/YooSecurity experts can plan out a solution to access your computer in safe mode with networking at first. When it’s possible to do that, their experts will do as follows:

Step B: Press Ctrl+Alt+Del keys to open the Task manager to stop the progress of GreenDot MoneyPak Virus Scam Malware. Because the name will be changed fast, it will be show with different name.

Log in to profile in which you are getting the ransomware.
Go to my computer
Then press ALT button once
Go to tools on menu bar
Goth select Folder options…
Click on view tab
Select Show hidden files, folders, and drives
Click OK button. Next clean out the malicious random files and data.

The GreenDot MoneyPak Virus scam malware doesn’t attempt to destroy the computer system like many of the other viruses. The hackers have just one goal with this virus, and that is to infect as many computers as possible in an attempt to get a large percentage to send them the money. This virus alone is responsible for scamming millions of dollars from unsuspecting PC users that fall for the scam each year.

The hackers have small fees of a hundred or few hundred dollars because they know many people will be so scared and know that they did in fact break some rules, that they will just pay it in hopes that all of their troubles disappear. Even if the fine is paid the computer will remain locked, regardless of what the message states. Verifying the payment will not unlock the computer, and the only way to remove the block and gain control again is to delete all of the GreenDot MoneyPak virus files located in the system. There are detailed instructions below that will assist in removing the dangerous files and ridding the computer of the Green Dot MoneyPak virus.