The FBI MoneyGram virus (alias FBI Cybercrime Division virus) is a ransomware attack that attempts to trick the users that it infects into paying a $300 fine for several violations and then threatens further financial penalties as well as possible criminal charges if the fine is not paid immediately. Same as the PCEU virus or Moneypak scam virus, it is spread through a long list of malicious websites that attract users with promises of free downloads or free streaming TV programs and movies. They also hijack legitimate websites and infect visitors with the attack as well. There are also reports of users getting the virus by opening an email attachment that was labeled as a legitimate software download. The majority of the users that are infected with this are done so when attempting to download and install pirated illegal copies of files, making them further believe that they may have indeed broken some laws, and quickly paying the alleged fine.

Once the FBI MoneyGram virus is installed on the computer it will lock all functions of the computer and display a notice that will not minimize or close. The message appears to come directly from the FBI Moneypak virus and it displays the users location in the form of their IP address and geographic location. It also has the ability to hijack the webcam on the computer and it will display a live feed stating that the authorities are using that information to properly identify the user so they can move forward with their criminal charges. It accuses the user of sending spam emails, distributing pornographic material, and also for violating several copyright laws. 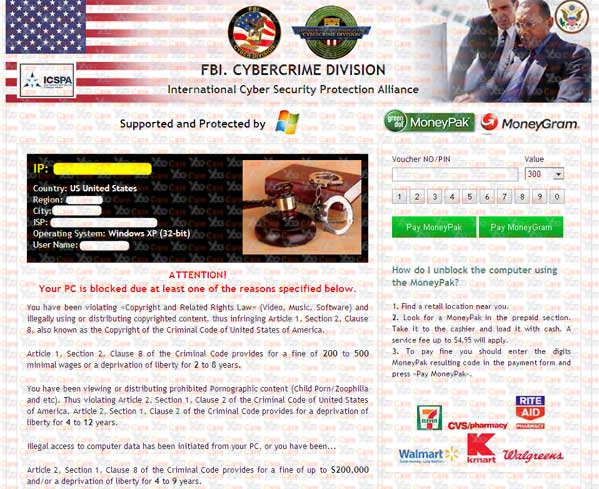 There are currently several versions of the FBI MoneyGram virus, and the warning message will differ depending on the users location. There is a version of this attack for virtually every single country, and they all have the same information. An example of one of the warning message text is:

“FBI CYBERCRIME DIVISION
International Cyber Security Protection Alliance
ATTENTION!
Your PC is blocked due at least one of the reasons specified below.
You have been violating Copyright and Related Rights Law. (Video, Music, Software) and illegally using or distributing copyrighted content, thus infringing Article 1, Section 2, Clause 8, also known as the Copyright of the Criminal Code of United States of America.
Article 1, Section 2, Clause 8 of the Criminal Code provides for a fine of 200 to 500 minimal wages or a deprivation of liberty for 2 to 8 years.
You have been viewing or distributing prohibited Pornographic content (Child Porn/Zoophilia and etc). Thus violating Article 2, Section 1, Clause 2 of the Criminal Code of United States of America.
(…)
Fines may only be paid within 72 hours after the infringement. As soon as 72 hours elapse, the possibility to pay the fine expires, and a criminal case is initiated against you automatically within the next 72 hours! To unblock the computer you must pay the fine through MoneyPak of $300. When you pay the fine, your PC will get unlocked in 1 to 72 hours after the money is put into the State’s account.
Since your PC is unlocked, you will be given 7 days to correct all violations. In case all violations are not corrected after 7 working days, your PC will be blocked again, and a criminal case will be initiated against you automatically under one or more articles specified above.”

It is important to understand that the FBI MoneyGram virus is not real, as not legitimate law enforcement agency is ever going to lock your computer or demand that a payment is sent through the computer. Many users fall for this because they are infected with the attack after downloading pirated software, so they know that they did indeed break a law. They pay in hopes of no further action is taken. This is a great example of why it is important not to trust free downloads that are found online. A large percentage of them are just doorways into your system for hackers.

The only way to regain control of the computer is to remove the virus completely form the computer. Even paying the “fine” will not unlock the computer like the message states. Below you will find detailed information and instructions explaining how to remove the files that belong to the FBI MoneyGram virus.

Step B: Press Ctrl+Alt+Del keys to open the Task manager to stop the progress of FBI MoneyGram virus Scam Malware. Because the name will be changed fast, it will be show with different name.

You must understand recently, there are lots of people fell into the scam and they said: “we were watching a movie online when we got a block on our computer from dept of Justice FBI MoneyGram virus saying something about a fine of $300 to be paid and something about child porn in which no one has ever seen.” When they have fallen victim to the FBI MoneyGram virus (FBI Moneypak virus) on their other laptops. They could not start in safe mode or safe mode in networking without arriving at the same screen and being locked out. After trying almost everything with no success, they contact YooSecurity guys who are able to walk them thru the start with command prompt and remove the virus. They also wanted to know how to precess this whole steps and how long would the process take and If YooSecurity guys have a lot of experience with removing the virus. Well, if you are not sure what to do please contact YooSecurity experts as they specialize in virus, malware, spyware removal, it is the best way to remove the virus completely from your computer.