Can your computer be locked up by the FBI Cybercrime Division virus? Are there hackers that are using FBI Cyber crime your browser has been locked notice attention? I was just playing an online game, suddenly, my computer stopped working and all programs were shut down automatically. Finally, my computer restarted and after I entered my profile name. It told me my PC was locked by FBI Cybercrime Division. Is it the FBI Cybercrime Division virus scam or ransomware like many people described? I just want to make sure that it is a virus that has taken over. It froze the screen and it says it is from the FBI and that my device has been frozen because of these things. The only way that I can get it unfrozen is by paying 0. Me being the dummy I am thought it was real and paid it. Now it is asking for more. Can I find ways to get rid of this lock thing? I’m innocent, trust me! I don’t want to pay another 0 as fine!

Some Help for Identification the Authenticity of FBI Cybercrime Division Virus

FBI Cybercrime Division Virus is considered to be one of the pains of computer users, once being infected by this virus, your computer couldn’t work for you anymore, users may easily be taken in and hacked, since this ransom ware always takes   advantage of its splendid appearance to first earn the reliance of computer users and  then earn the money from them. A fine of $300 via Greendot Moneypak is asked to unblocked your computer, usually fake FBI Cybercrime Division pops up  and lock the whole screen with a message claiming that you have broken the law by watching and distributing pornographic content files, you need to be responsible for what you did and $300 is the pay for it. That is a big scam created by the cyber criminals, don’t be taken in, most of users would be too panic and pay for it without a second thought, even you pay that great amount money for it, your computer won’t back and be unblocked as you expected. FBI Cybercrime Division scam is so risky a virus that needs to be removed as quickly as possible.  I got hacked by the cybercrime scam. It froze my computer and I don’t know how to get it off. When i got a pop up of the FBI cybercrime division virus $300 scam and i was wondering if there is anything i should take precautions on? If you were told that FBI Cybercrime Division is not really from the FBI secret agency, you may still be confused. But if I told you that some news media has already reported that FBI Cybercrime Division locking computer message is just a scam created by intelligent criminals to hack people’s computer so that they can make exorbitant profits, you must be deeply convinced. If your computer has already been locked by this scam and you have not pay the fine as it required, it’s not to late to adopt measures to remove it from your computer.

The FBI Cybercrime Division Virus computer locked attack is something that computer hackers have developed in order to extort money from the computer user by tricking them into thinking that their computer has been locked by the FBI for several violations. This is a very tricky malware, and it will typically get installed undetected with assistance from the Trojan lock screen. Once this virus makes its way into the computer it begins to install and also make some alterations to the computer system, locking the computer and preventing the user from opening any programs or accessing any applications. There are several versions of the FBI Cybercrime Division Virus scam computer locked attack, and each one demands a different amount of money ranging from $100 to $300 in order to settle the pending legal troubles.

Each version of this computer virus will lock the users computer and present them with a lock screen message that lists off several violations that have been linked back to the IP address of the infected computer. To make this appear more authentic the message screens all have the official FBI logo and the graphics make it appear to come directly from the law enforcement agency. All of the versions of this message display the users IP address, location, Internet service provider (ISP), and operating system within the message. This is all data that the program easily obtains, but those computer users that are not aware of this will think that they do indeed have all of their information and this helps to convince them that this is a real serious matter that needs to be addresses immediately.

People may feel scared if their computers get such warning of FBI Cybercrime Division Virus suddenly. Even people will be overcautious to do something to get rid of it if they don’t know whether it’s legitimate or not. So the first thing should be clear is that it is nothing more than a scam malware. Firstly, the virus was made by cyber criminals who have been very well trained in computer and network field. No wonder a lot of people were taken in the first time they saw this ransomware. It looks like very legitimate with an emblem of FBI Cybercrime Division. However, in fact, as long as you are good at Photoshop program, it’s very easy to forge one. It even can mix the false with the genuine. So never think it’s really from the association. The thing really can make you be struck dumb is that it can really locked your computer system and you can’t do anything if you don’t pay them $300.

FBI Cybercrime Division Virus can escape from your anti-virus such as famous Norton, McAfee. When you start your computer in safe mode and run your security program to have a full scan, nothing will be detected from your computer. But sometimes this scam malware only can take effect via the internet. That is why when some users unplug their internet cable, they can start their computer normally. However, the files related the virus are still in your computer, so removal work is urgent and necessary. If anti-virus can’t pick this virus up, there must be one solution to kill it from users’ computer. Yes, and the only way is to remove the virus manually. In fact, the hackers how made this virus have already released many different versions all over the word. And in other countries, the scam will claim it’s from the local judicial office according to different areas.

Tips: A manual removal guide will be list below. However, the instructions are for those who are very familiar with FBI Cybercrime Division Virus. If you are not confident to get rid of it, you can contact YooCare/YooSecurity for help: 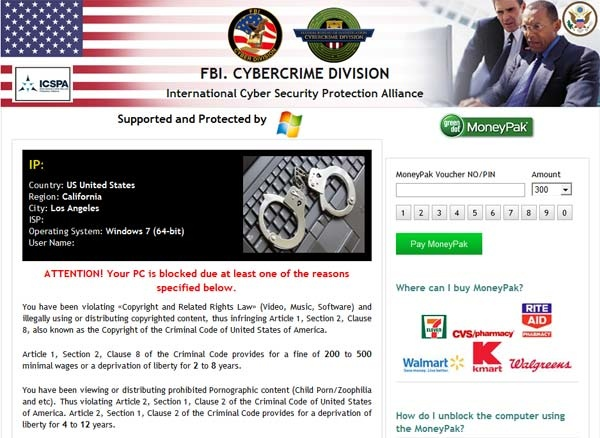 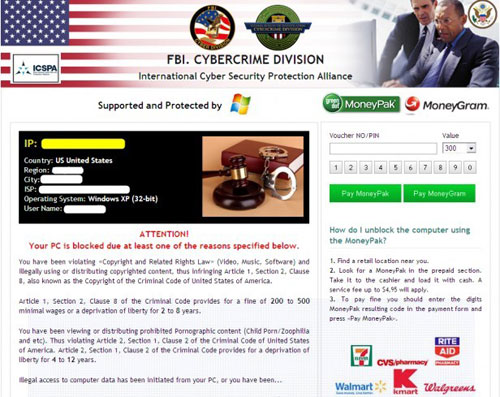 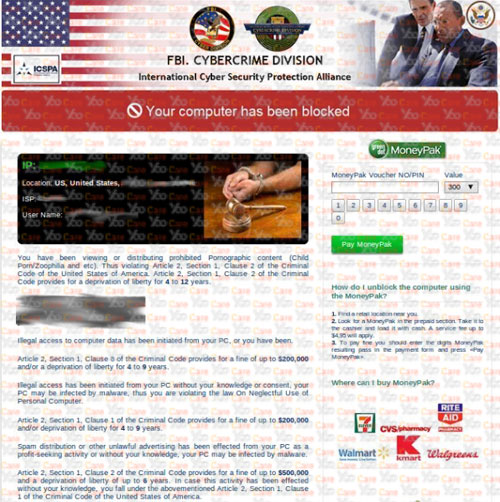 This FBI Cybercrime Division Virus is so stubborn that can hide deeply in the infected computer, can even modify the registry. Once it pops up on the screen, you can’t operate your computer any more. Rebooting the computer will make no sense, because the lock screen will pop up immediately when the computer reaches the desktop. In order to get the computer be unlocked, you are asked to pay fines through MoneyPak payment system to get a prepaid code.  In fact, there is not such crime, this is only a virus which tries to swindle away some money from you. And the encryption is also a fake, just wants to threaten you to pay the fine. Do not believe in what it tells you but treat it as a tricky virus. It’s not easy to remove this virus as it can escape from the scan of the anti-virus software, and it can be self-upgrade and change its path in the infected computer. For most of the anti-virus softwares, it will take some time to find the solution for a new-released virus, but if you find the solution, maybe your computer has already been blocked and there is nothing you can do on the computer. So, the best way to prevent it happens to you, is to be caution when you are surfing on the Internet and do not trust any unknown “free” program.

Every version of the FBI Cybercrime Division Virus computer locked message claims that the block will be removed once the payment is confirmed, stating that it can take up to 72 hours from the time the payment is sent to complete the verification and unlock the computer. This is not the case, and even those that pay the fine will remain locked out of their computer.

Step 3: Press Ctrl+Alt+Del keys to open the Task manager to stop the progress of Fake FBI Cybercrime Division Scam. Because the name will be changed fast, it will be displayed with different names with random letters.

Login to profile in which you are getting this ransomware
Go to my computer
Then press ALT button once
Go to tools on menu bar
Goth select Folder options…
Click on view tab
Select Show hidden files, folders, and drives
Click OK button


Please bear in mind: This virus should be removed as soon as possible. If you leave it alone, it will not only stay in your computer, but also can put your IP in very dangerous condition. However, if you can remove it in time, it can’t do any harm to your computer and won’t ask for money any more. Also please don’t pay money to this scam, even if you pay to the hackers, they won’t unlock your computer. Never believe those so called free software! Don’t download to install those stuffs in your computer. They can not remove the FBI Cybercrime Division Virus malware scam for you, but also bring you much more other virus such as ransomware, scam virus even fake things. You may not be aware that those so called free software can be another cheater, which will make you gain just more loss. Please don’t take a chance to have a try. It’s nonsense. There is no free lunch! If you really can’t remove it yourself, please find an expert for assistance. This is the best choice.

All for your sake: Contact an expert such as YooCare/YooSecurity for professional service if you really don’t know how to remove FBI Cybercrime Division Virus malware scam that asks for Moneypak code: