I have an AVC Plus on my computer and now want to uninstall it, but I cannot find it in the control panel. Actually I don’t know where I can find it out on my computer system. AVC Plus is not an antivirus, because it just can detect and scan. What drives me to me crazy is that it always pops up every 30 minutes saying my computer has threats or system is damaged severely or system is compromised by virus and do on. However, it cannot deal with those security alerts. What is it going on? And those alert pop-up may block me to do other tasks on computer, because sometimes, when AVC Plus pops up then my computer is frozen at the pop-up screen. So I need help to get rid of it as soon as possible.

AVC Plus program is actually a rogue antivirus program that has no ability to protect your machine from being infected with virus infection but put your computer security into worse situation and cause you suffer from financial loss. This fake antivirus also belongs to FakeRean-Braviax family of computer infections. Creator of FakeRean-Braviax family always design new version of this rogue antivirus program to compromise targeted computer to cheat people to pay certain money for another fake version of rogue antivirus. That is the main purpose to infect computer. And how does AVC Plus rogue antivirus reach this goal? First, it needs to make people convince that AVC Plus is trustful and working-well antivirus program, also creator of this fake program is qualified with well and professional computer knowledge and design this fake program looks like those authentic antivirus program. At least, reliable face will not let people doubt it. Therefore, when AVC Plus virus comes to computer, most PC users don’t feel that it is a fake antivirus, in addition, it will quickly run a full scanning for your whole computer and immediately reports that your computer is compromised with many viruses. But actually this message is fake, and your computer may be in a well state and there is no virus on computer at all. In fact, fake AVC Plus just scares you by showing you fake computer security and trick you into following its instruction to purchase its so-called registered version. The real purpose of it is to get your money.

Except that AVC Plus virus can cheat out your money by throwing fake security alerts, it can bring many damages to your computer and operating system. Once it drops into your computer, it will change the start-up items and modify the registry editor so that it can run as soon as you start up your computer. It can block and disable legitimate Windows applications and other normal functions like Windows Task Manager and Registry editor. Every time when AVC Plus automatically runs to scan, it actually disables system programs and destroys computer security shell, which will result in more and more loopholes and create opportunities to bring other viruses to mess up computer. If your computer is compromised with more virus infections, it will load more files and programs to take up the rest capacity of system and CPU usage will suddenly be up to 100%. In this case, your computer and internet speed will run at a slower speed. You even cannot run more programs at the same time. Even worse, some windows programs have been disabled and cannot run at all. Computer may get stuck to blue death. In a word, AVC Plus rogue program is actually a virus that only put computer security into worse and dangerous situation. Removing AVC Plus is the wise decision.

A Screenshot of This AVC Plus Infection (Fake Antivirus Alert) 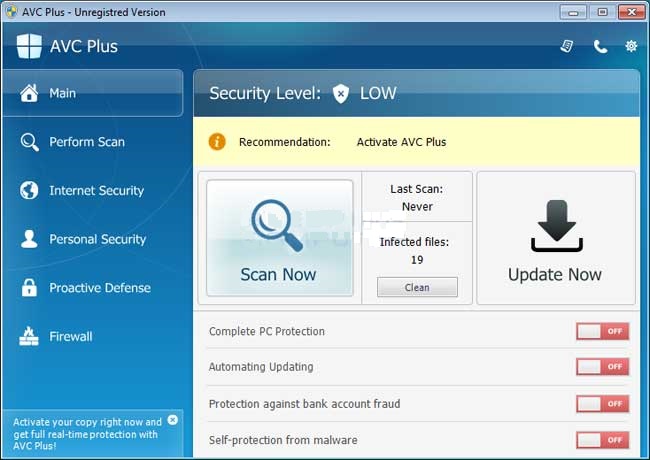 Finding all or some of these symptoms on your computer, sorry to say that your computer is infected by AVC Plus virus. Please contact YooSecurity Online PC Experts for manual removal guide. Also, we will provide a short removal guide below for computer literate.

In order to get into this mode, you should restart your infected computer and tap F8 key constantly when computer is booting back up to get safe mode options on the screen, use arrow keys to highlight the option you want to enter then press E/Enter key. * Usually, this rogue program will be disabled from automatically starting in safe modes. Users will be able to fix the AVC Plus problem without constantly blocks from the fake AV. If you are a Windows 8 user, click here and learn how to boot up Windows 8 to safe mode.

Step 2: Find Ctrl, Alt, and Delete these 3 keys and then press them together to open task manager to end the process related to AVC Plus, the name of the process of it is random.

Then try to find AVC Plus, highlight it and choose Remove.

Once AVC Plus virus is installed to your computer it will be configured to run automatically along with the operating system, and each time when you start up your computer it will pretend to be computer internet security software to run and display fake security state of your computer to scare you. It aims at cheating out of your money by recommending you to purchase its fake full version. This fake antivirus AVC Plus also performs destructive activities on your computer. This fake AVC Plus damages the main system files to make it be able to pop up even under troubleshooting mode such as safe mode and safe mode with networking. It damages some fatal system to slow down computer performance. What you should do promptly is to remove fake AVC Plus and install a real reputable antivirus program to protect your computer instead of a fake one.

Suggestion: To follow removal guide that mentioned above, a quite level of computer knowledge is needed. Still can’t get out of AVC Plus virus? Contact online experts for help now!