I’m having a hard time removing this antivirus plus 2014 pop up from my computer. Is it fake or a helpful tool? Should I just keep it since I don’t have any protection on the PC? But it’s really giving me tough moments for using the computer. I’m constantly blocked whenever trying to run on my computer. How to get rid of AntiVirus Plus 2014 screen?

AntiVirus Plus 2014 is a rogue program that attacks Windows users mostly and causes lots of inconveniences. This type of fake AV software usually pretends as legit PC protection tool while its actual purpose is to help computer hackers scam innocent PC users. First the unwanted program gets installed on your computer via unknown online resources, then it scans through your computer and reports many risks to you hoping to convince you that PC is at risks and trick you into paying for this rogue. It has managed to scam many average computer users with its deceitful appearance. Users, especially victims of this rogue antivirus are warned to stay away from any forms of online payment when computers are hacked by this PUP.

As mentioned above, Windows users are the major targets of this fake AntiVirus Plus 2014 virus scam. Once the rogue is installed and activated, your computer will act in a totally different way. To be more specific:

– The fake AV will be set as the default startup process of the system and get activated automatically when PC starts up.
– Most files and programs are blocked from running and reported to be infected by viruses.
– Users can receive constant security pop ups telling them their PCs are infected.
– The infected system is lagging and CPU resources are taken up higher than usual.

How to go about removing AntiVirus Plus 2014 in my computer?

Compared to anti-malware removal which can be disabled by the virus infection under most circumstances, manual removal is a more effective way to get rid of this rogue from your computer. For that, expertise will be required to accurate the process of the removal as any vital mistakes could be resulted due to a misleading step.

Suggestions: Not a PC expert yourself? Contact YooSecurity Online PC Experts now for removal help to save your computer from all the messes:

* It is noticeable to all that this rogue pop up has a similar appearance as many legit antivirus programs. Hence, average PC users can be easily confused by this scam ware and will be more willing to pay to activate the rogue program. Warning! The amount won’t be returnable once the money is entered.

1. Home page of this rogue: 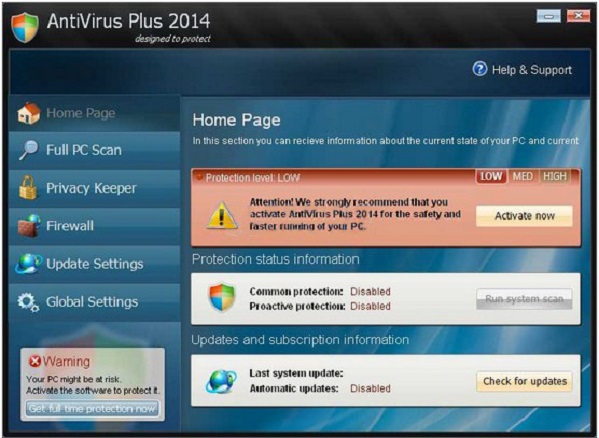 2. Many detected threats are being reported: 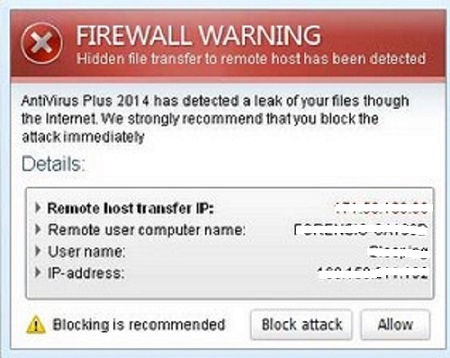 Where can I get the activation code?

If you are scared and convinced by this fake AV, you will be required to activate the program to a full version so as to get all the detected threats removed. As a matter of fact, there isn’t a full version of this rogue. You are actually being scammed. The more users pay, the more can hackers get benefits from this rogue antivirus scam.

How do I remove these security pop ups?

Numerous threats and security alerts will be found and reported by this rogue on your computer. But don’t be fooled! These detected threats may not be real but could actually associate with important system or program files without which the proper running of system will not be guaranteed. Simple rules! Ignore anything this scam program says and uninstall AntiVirus Plus 2014 as soon as possible.

Restart the infected computer, tap F8 key constantly when computer is booting back up to get safe mode options on the screen, use arrow keys to highlight the option you want to enter then press E/Enter key. * Usually, this rogue program will be disabled from automatically starting in safe mode. Users will be able to fix the problem without constant blocks from the fake AV.

Press CTRL+ALT+DELETE or CTRL+SHIFT+ESC; or pull up Run box from Start menu to type in taskmgr
Click on Processes tab
End process of AntiVirus Plus 2014 virus

* Special tips for Windows 8 users: To put a Windows 8 into safe mode, press CTRL+ALT+DELETE to get the Restart option, hold down Shift key then select Restart. On the Choose an option screen, select Troubleshoot, Advanced options, Startup Settings, Restart. If you are still having troubles with the fix process on a Windows 8, contact online PC experts for help now.

Antivirus programs are supposed to be helpful protection tools in keeping PC safe. But there is one type of computer threat called rogue antispyware which is sponsored by computer hackers and will claim to be legit tool in order to scam PC users. The AntiVirus Plus 2014 is one of them. The rogue can actually install on your computer without permission by bundling with the freeware or adware you download on the machine. Many files and programs will be blocked by this fake AV screen and lots of fake security threats will be detected and reported. If you believe what this rogue says, you may be easily scammed. Money will be required to get this fake AV activated in order to remove all the “threats”. Do not purchase this scam ware! A manual removal with expertise will help you get rid of Antivirus Plus thing.

Note: Can’t boot into safe mode by F8? Having other troubles during the manual removal process? Contact YooSecurity Experts now to get further assistance in order to save PC from all the potential risks: