Is This Politiet Norsk Politi Institutt for Cybercrime Virus Real or Fake?

Norsk Politi Institutt for Cybercrime pops up a fake police notice on your computer screen stating you have violated the Norwich copyright and other laws violations, and requires paying the €100 euro fines immediately to avoid law enforcement actions. Don’t pay any fines to these criminals as this is a scam and you won’t be unlocked even you have agreed to settle the payment. Norsk Politi Institutt for Cybercrime is still out of the detections by most of the anti-virus and anti-malware programs by the time we have published this guide, though the Reveton ransomware family has been around for a long time. What is worst, the virus can’t be removed by anti-virus. Many users have tried their Norton, AVG or McAfee without any luck. Obviously, when you get such virus in your computer, to find a safe method to remove the virus is extremely urgent. Manual removal is the best way to unlock your computer and get rid of the virus from your computer.  But if you’re not confident to get rid of it as the manual removal requires knowledge on editing Windows Registry and other computer skills, please contact YooCare/YooSecurity for help:

The ScreenShot of Norsk Politi Institutt for Cybercrime Virus Ransomware 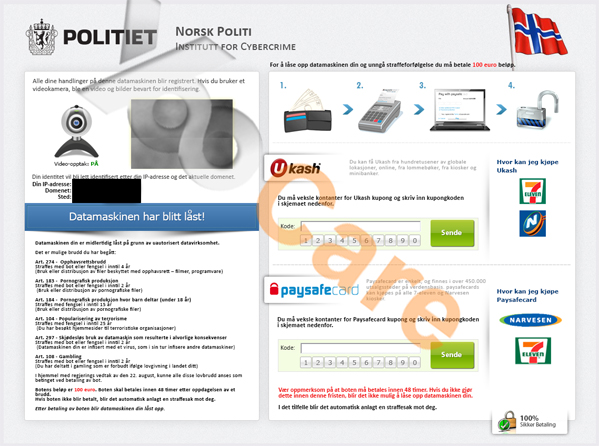 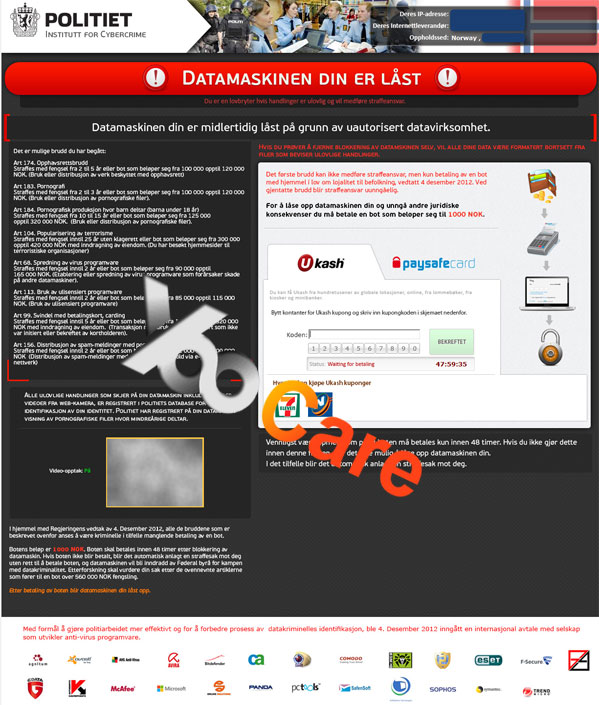 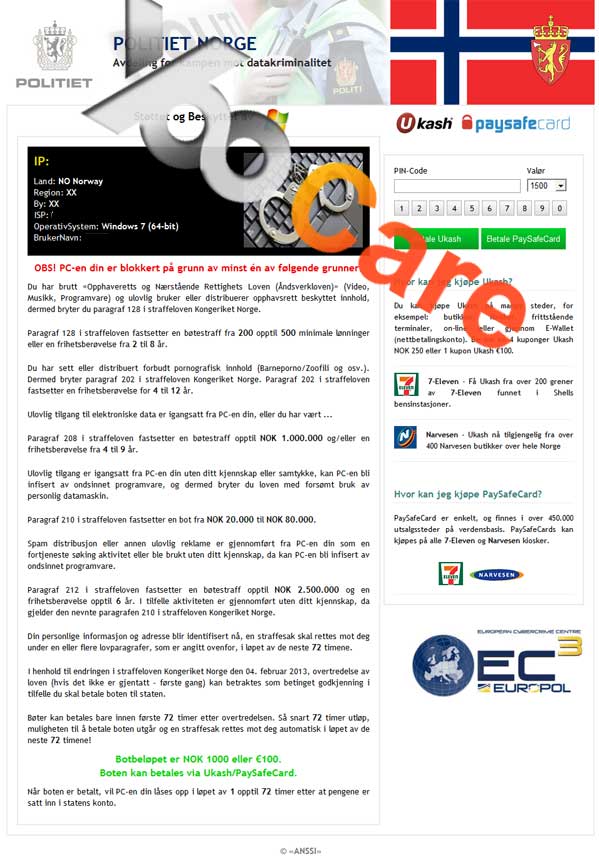 Step 3: Press Ctrl+Alt+Del keys to open the Task manager to stop the progress of Politiet Norsk Politi Institutt for Cybercrime Scam. Because the name will be changed fast, it will be displayed with different names with random letters.

Login to profile in which you are getting Ransomware…
Go to my computer
Then press ALT button once
Go to tools on menu bar
Goth select Folder options…
Click on view tab
Select Show hidden files, folders, and drives
Click OK button

At last but not least, never believe those so called free software! These geolocation-based variants are becoming more and more rampant as the social engineering scam technique has been proven to be effectively scaring the victim users to pay the fines in order to avoid further punishments from police enforcements. Most of the victim users are infected with Norsk Politi Institutt for Cybercrime Ukash/Paysafecard virus when they are watching videos online (especially porn videos), visiting adult sites and cam sites, downloading files from Warez portals, and social websites. It bases on the advantages that the victim users are violating the laws at some points and then easily deceive you to buy into the scam messages Norway Police Ukash virus for Cybercrime tries to promote for profits.

Special tips: Spending a lot of time fixing your computer with no success and don’t want to make things worse? Contact experts now to unlock your computer and remove Politiet Norsk Politi Institutt for Cybercrime Virus Scam safely and completely.