How can I remove Internet Security 2014 virus manually when it blocked every access to tools or files? Recently, I have an alert on my business computer and it asks me to buy the Internet Security 2014 reg key or activation code to register for the full version. I cannot even get onto the internet on mine unless I am running it in safe mode, i have real anti-virus program, so i am sure this freak thing is malware, but it won’t let me run anything. What is the best way to clean out this threat?

The Internet Security 2014 virus seems another computer attack that many to believe is a legitimate computer safeguard that has just warned the user that the computer is at risk due to lots of threats detected during the recent system scan. It is very similar to Internet Security 2013 virus. Currently, user’s computer has been infected with Internet Security 2014 malware, which shut down the IE and didn’t allow to run regedit. It created a desktop icon that pointed to its executable insecure.exe. The Internet Security 2014 Virus is a malicious threat that once installed on the computer will attempt to do two things. The first thing is to attempt to steal money from the user by tricking them into thinking that there are serious threats on the computer that need to be removed by a security program and charging the user to install this software to clear the computer of the dangers that have been detected. The second thing that this attack will do is begin to take down the computer system and if left undetected it will eventually crash the entire computer, putting all of the data stored on the hard drive at danger of being lost forever.

The ransomware portion of the Internet Security 2014 Virus launches immediately when the computer is started and it will display what appears to be a security scan that is scanning through the computer files. It will then begin to display threats and viruses that it has detected on the computer. This is not a real scan and the results are pre-programmed by the hackers and not actual threats that are on the computer. Once the manufactured scan is finished it will display the list of viruses and attacks that have been discovered with the option to remove them all by deleting them. Naturally, the user is going to select that option, but when they do it states that they need to purchase the software in order to complete the task.

Now, once the purchase is made all of the viruses and threats will be deleted according to the virus. This is just a very cleaver way to extort money from computer users. They will make the payment online and think nothing of it, simply thinking that they upgraded their virus scanning software and they will feel good because they now believe that their computer is free from potentially harmful viruses, but little do they know that the Internet Security 2014 Virus is about to start digging deeper into the files and it will then start to install additional malware viruses and give the hackers remote access from the computer. 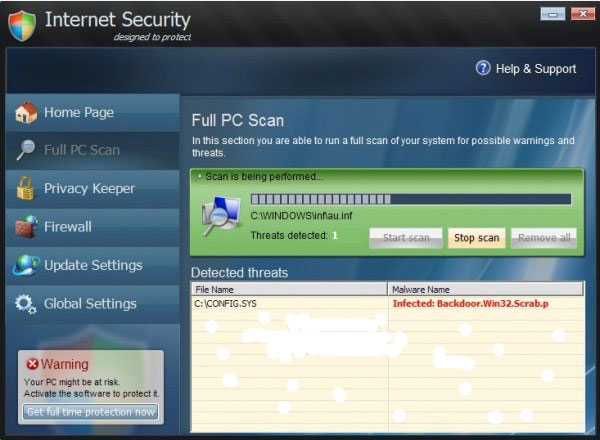 How Do You Verify If The 2014 Internet Security Virus Alert Is Real or Fake?

The most common way of spreading the Internet Security 2014 Virus is through email blasting and including the virus within an email attachment sent with the email. They send it to millions of users nonstop and it is amazing how many computer users carelessly open the emails and then open the attachment, instantly infecting their computer. This careless behavior is also the way that they spread the attack across various freeware and file sharing websites. The virus is hidden within download links in video, music, and software files. Along with the false scan results, the Internet Security 2014 virus will also display messages stating that the data stored on the computer is at risk, and these messages include:

“System hijack!
System security threat was detected. Viruses and/or spyware may be damaging your system now. Prevent infection and data loss or stealing by running a free security scan.

Privacy threat!
Spyware intrusion detected. Your system is infected. System integrity is at risk. Private data can be stolen by third parties, including credit card details and passwords. Click here to perform a security repair.

Virus infection!
System security was found to be compromised. Your computer is now infected. Attention, irreversible system changes may occur. Private data may get stolen. Click here now for an instant anti-virus scan.”

Once installed it will disable several programs and if they are attempted to be opened the following message will display: 3. Delete associated files of the rogue anti-spyware from your computer completely as follows:

4. Search for all related registry entries infected by Internet Security 2014 Virus and wipe them out:

Internet Security 2014 virus looks as it is a real anti-virus application, but don’t trust that wonderful interface of the warning Window, it is indeed a fake security tool created by criminals or hackers. The hackers are already in possession of the credit card information belonging to the user and can now use that to make additional fraudulent charges or sell the information to cyber criminal groups on the black market. They can now also search through the computer files and attempt to steal other personal information, but what they are really looking for is any kind of additional financial data. So the urgent thing is to uninstall the rogue thing away manually. Manual removal is a complex and risky process, so if you are not computer geek please contact YooSecurity PC experts 24/7 online for further tech support. That is the best way to keep your computer from all infections.

Note: If you have trouble to deal with this fraudulent virus, please contact YooSecurity PC experts 24/7 online for assistance to help you remove Internet Security 2014 Virus from your computer completely.