How to Remove Fake NCA Virus on Phone or Tablet?

Hi, I have a problem with my Samsung galaxy, it has been locked and says I need to subject to a fine of 100 GBP within 2 working days to unlock it. It saying I have downloaded indecent images which I haven’t what do I do something about the police getting involved. I been trying to use my phone but I barely can’t do anything, even can’t power it off, please I need your help to get rid of this virus.

NCA virus is hacker dress into a fake police agency to threaten citizens’ money. When you get a warning from NCA virus saying your phone or tablet has been locked due to some safety reasons and all the actions performed on the phone can be recorded. It is totally a scam virus that has been reported by many victims. Now the virus hacks smartphone and tablet. And the infected device would then be under the control of criminals, enabling them to access personal or banking information, steal passwords and disable antivirus protection. Investigators believe this virus may have infected over three million devices worldwide, with around 33,000 of those being in the UK. It has so far largely been used to attempt to take money from bank accounts. People who encounter this warning should not be worried about if they will go to the jail for some illegal activities, but we should get rid of the virus from your phone or tablet as soon as possible.

The Screenshot of NCA virus 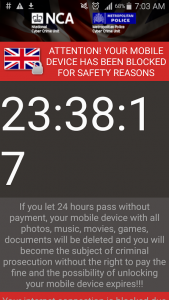 When this NCA Virus was firstly invented, it is used to attack computers with Windows operating systems and Mac machines. From the name of it, we can easily figure out it is a kind of ransomware that targets on innocent people who live in the UK. With the time goes, cyber hackers not only exploit this virus to attack computers nowadays, smart phones with Android system can be the targets as well. Being one of the most famous systems in the world, Android system is capable to install many apps to fulfill different purposes for phone users. Under this circumstance, cyber criminals can design many malicious apps which contain this scam virus for people to download. It is not easy for phone users to recognize whether the applications they download into their phones are useful or not before they start to run and use the apps. Usually, if people don’t want an application on their phones, they can simply come to the setting and uninstall the one that they don’t like. However, if people download programs which contain this virus, they will never get a chance to uninstall the program as the phone can be completely blocked by this virus!

People are not able to bypass or close the block page to do anything else on the infected phone. In this case, the infected phone can be totally useless, no matter how many times phone users restart the infected phones, the block screen can occupy the whole screen in a rapid way. People will not be able to use the infected phone to call, and the buttons on the phone can be unresponsive, which means people cannot turn off the infected phone by pressing the power button. In order to unlock the phone and avoid jail punishment, this virus announces that to pay a so called penalty can make the people be free. To make the warning be more authentic, cyber hackers can put a logo of a police department into the block page. It is only a trick to threaten victims who don’t want to get into trouble with the police. Just need to remember, police won’t do such thing on your phone, it has nothing to do with the police. The only purpose of this virus is to dupe unsuspecting people to transfer money to the makers of this virus. As many victims reported, even though the payment has been made, their phones are still locked. If this virus cannot be removed, the block page can appear all the time.

Suggestion:The NCA Virus must be removed manually, if manual operation virus is difficult for you. Please contact YooSecurity 24/7 Online Experts to help you.

Step 1: Put your Android device into safe mode.
There are two ways to go into the safe mode:

1. Long-press the Power Off option and you’ll be asked if you want to reboot your Android device into safe mode. Tap the OK button. 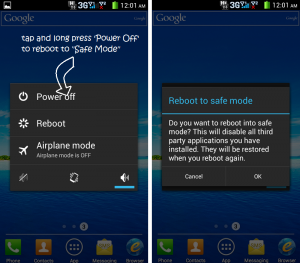 2. Turn off your device, and then turn it on. When you see a logo appear during boot-up, hold down both the Volume Up and Volume Down buttons at the same time. Continue holding the two buttons until the device boots up with a Safe mode indicator at the bottom-left corner of its screen. 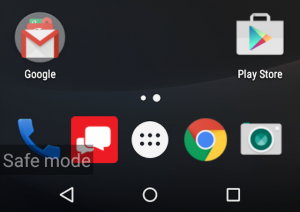 Note: You’ll only have access to the apps that came with your device in safe mode. Apps you’ve installed will be disabled and any widgets you’ve added to your home screens won’t be present.

NCA virus is a kind of scam which can block the whole phone from using. It has been reported by many Android phone and tablet users. It can cheat phone users that they have done something wrong which break the law. Phone users are not able to use the locked phones at all unless the fine is paid. However, many phone users still can be locked out after they pay to the virus. It is not easy to get the money back as the payment must be done via an anonymous way that can also increase the difficulty for police to chase the criminals.

Note: To follow removal guide to get out of Interpol virus that mentioned above, a quite level of phone knowledge is needed. Otherwise, the wrong operating on the safe mode can make the situation even worse. Please make sure you are capable of dealing with this. If not, please Contact online experts for help now!