Being confused that a antivirus software named Windows Antivirus Release tells you that your computer have been infected some virus you should active it? What even baffling you that after activating it you computer become wired! I may tell you that ‘s the true virus! You should remove it immediately!

Windows Antivirus Release is another fake antivirus software. It often shows a security alert says that your computer has been infected some virus, such as Trojans, worms and other threats, you need to install it to have a full scan and remove the virus, otherwise your computer will be at a high risk. The truth is Windows Antivirus Release is a fake rogue program, fake security warnings, fake scan results. It does this to scare you into thinking that your computer has a severe security problem so that you will click it and then purchase a license to supposedly remove these problems. If you do that then you have been taken in! What a worse, the fake program will change your computer’s settings, the internet connection will be blocked and the task manager and registry editor will be disabled or even bring some other virus anyway. If you attempt to use the program to clean your computer, though, it will first prompt you to purchase it before being allowed to do so. Generally speaking, there are 3 methods Windows Antivirus Release prompts: Firstly, it hack in websites that attempt to exploit vulnerabilities on your computer in order to install the infection without your awareness or permission; Secondly, it pretends to be an online anti-malware scanner through advertisements, these advertisements will pretend to scan your computer and then state that your computer is heavily infected. It will then prompt you to download the installed for the rogue. Finally, this malware is also promoted through Trojans that pretend be software needed to view an online video. As this program is a scam, please ignore any prompts to purchase it and just close the program. 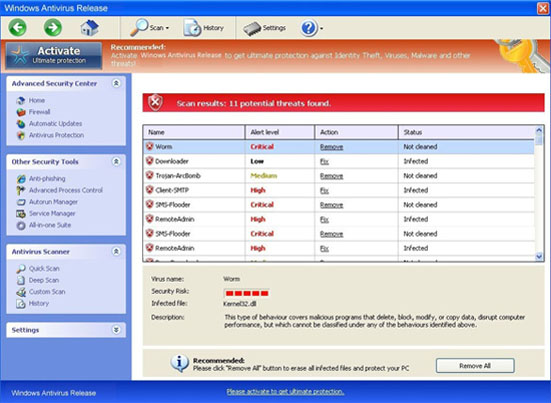 Error
Trojan activity detected. System data security is at risk.
It is recommended to activate protection and run a full system scan.

step1. Restart your computer. As your computer restarts but before Windows launches, tap “F8” key constantly. Use the arrow keys to highlight the “Safe Mode with Networking” option, and then press “ENTER”.

step3. Go to the tab Connections. At the bottom, click on LAN settings. Uncheck the option Use a proxy server for your LAN. This should remove the malicious proxy server and allow you to use the internet again.

In a word, Windows Antivirus Release is an computer infection that is part of the the Rogue. It’s a scam that make you purchase money for it.  When it starts it will create some Windows Registry settings so you are unable to launch some security programs and Windows utilities. It always use the tricks scare you make you take in so you may pay it , for example ,it pops up a security alert window like usual antiware shows your computer has been at a high risk, you may need a scan and clean them, but when you activate the fake program, that’s right it will have s scan, but after scanning it will shows some horrible virus take you in and you just need to pay it to remove the virus. Like I said before, it’s a fake antivirus program! You are  recommended to remove Windows Antivirus Release fake software  from the system because it may cause system slow downs, browser redirection and other activity which is unwanted and malicious. This false antimalware is programmed to work as a system scan for viruses. If you receive alerts from Windows Antivirus Release rogue, ignore it and never remove these files reported as malware.

Tips: If you are not good enough at computing and could not remove Windows Antivirus Release virus by yourself, and you don’t want to make things worse, please contact PC experts for help immediately.