The Cybercrime Politie Nederland Virus message pops up on your computer all of a sudden and blocks you from accessing the computer with a threatening warning page saying you have violated some laws and you will need to enter a fine of €100 to get your PC unlocked? This situation has happened to a lot of computer users for the past few months and it has caused huge troubles. Computer users who have got similar pop ups will be scammed a big time by cyber criminals if they believe what these messages say. This Cybercrime Politie Nederland pop up message is believed to be one of the latest versions from the Ukash scam family which is created by cyber criminals and to help them benefit inappropriately by scamming innocent PC users mostly from Netherlands. When getting this warning message on computer, you won’t be able to access the system anymore because of an entire block. The only way to gain access back, according to what this message says, is to pay the fine within the limited time via the required methods. However, instead of paying to get the PCs unlocked, people will be scammed. This Cybercrime Politie Nederland thing is more like a cyber fraud which shouldn’t be trusted by any.

We have similar scam viruses that attack other countries from Europe. For instance, the Metropolitan Police virus attacks PC users mostly from the United Kingdom. This Cybercrime Politie Nederland Virus (can also be known as the Korps Landelijke Politiediensten virus) is reported to attack PC users mostly from Netherlands by accusing them of watching child porn or distributing banned pornography online. As a matter of fact, reasons of being blocked are quite similar among all the scam viruses. For those who have actually done these activities online, they will be more willing to pay the fine in order to get themselves out of any potential troubles later on. But for others who haven’t done anything related to the crimes, they normally feel confused without any idea of what to do and might as well pay the fine to get their PCs unlocked in the end. But no matter how legit and real this message looks, the Cybercrime Politie Nederland Virus is a ukash scam malware which should be removed instead of paying for.

The Cybercrime Politie Nederland scam virus can be distributed on the Internet using the technique called bundling. Resources and mediums for the virus to bundle with include hacked sites and links, malicious freeware and spam attachments. Once it’s successfully installed, this virus will set itself as a part of the start-up process of the system so that it can launch the block message automatically every time the PC is turned on. You will then read that you have been violated laws online following by specific articles. Then in order to get your PC unlocked, according to this  Cybercrime Politie Nederland Virus, you will need to pay a fine of €100 via Ukash or PaySafeCard within the next 48 hours. You will also read that if this time has expired and you haven’t entered the payment, further criminal cases can be automatically started against you later on which might put you into more troubles. This Cybercrime Politie Nederland scam virus is trying all it can to get as many victims to pay as possible and will leave the PCs being blocked the same way they are.

To unlock your computer from the Cybercrime Politie Nederland scam virus, a complete removal is needed ASAP. Contact YooSecurity Online PC Experts for assistance if you are not a computer literate and have no idea on how to do it. 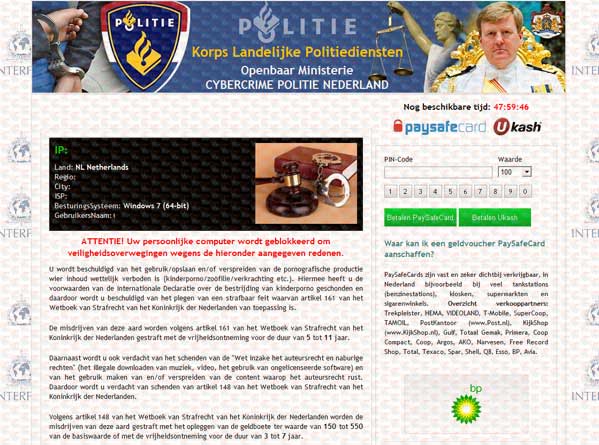 The Cybercrime Politie Nederland Virus, similar to many other viruses, claims itself as a joint effect of several authorities. In this case, Korps Landelijke Politiediensten, Openbaar Ministerie, Cybercrime Politie Nederland and Interpol are listed on the block page to prove that this is a legit warning message. Besides from that, your actual information including the IP and OS of the computer, your location info and user name can also be provided on the screen making this warning look authentic. Victims of this scam virus often feel surprised when they have found out that it’s a scam. Money won’t be returnable once payment is made to this scam virus. And your PC will be locked by the same screen as above with no evidence of getting unlocked.

Antivirus programs, which are created to help protect PCs away from viruses, have mostly failed to catch this ransomware and a complete removal is needed to unlock PC permanently from the Cybercrime Politie Nederland Virus. Manual removal is suggested here to help you unlock your PC from this virus. Follow the steps listed below to get started right away (expertise is required):

Step 2: Press Ctrl+Alt+Delete (Ctrl+Shift+Esc) at the same time to pull up the Windows Task Manager; go to Processes tab on top; then End processes associated with Cybercrime Politie Nederland Virus or processes that do not belong to system.

Step 3: Press Win+R keys together to pull up a Run box, then type regedit in to open Registry Editor.

PC users mainly from Netherlands have been reported to be attacked by this Cybercrime Politie Nederland Virus lately. Once the infection is done, computers will be completely blocked by this pop up message without giving you any chance to access the computer. The fact is, this scam virus is displaying the same old trick here to scam PC users from Netherlands as those of other viruses scam people from other countries. By reporting that you have violated laws because of what you have done on the Internet, it locks your computer up and requires a fine of €100 via Ukash or PaySafeCard to unlock your PC and to get yourself out of further legal troubles. Also, this scam virus will threaten you that further criminal cases can be automatically started against you if you refuse to pay this €100 amount of fine. Victims of this virus will pay after they are convinced that this block page is legit. What will happen if this 48 hour of payment time passes? The computers will still be blocked the same way as they will be after the payment is entered. A virus removal is only needed if you want to unlock PCs from this Cybercrime Politie Nederland scam virus.

Notice: Have spent hours struggling to remove this Cybercrime Politie Nederland Virus from your computer but with no success? Please contact YooSecurity Experts now to get help on a complete removal of this ransomware ASAP.