Win 7 Home Security 2013 is a fake antivirus scanner from the same rogue family, it is similar to Win 7 Defender 2013. The distribution of this program continues in year 2012 and widely spread to all over the world through misleading websites. When your browse such website, a video window with a big play button will display on the webpage. If you click the play button there will pops up a window saying that you need to download video codecs before you can watching the video. This is a trick designed for PC users. By doing so, you will download Win7 Home Security 2013 virus instead of codecs. Then the Win 7 Home Security 2013 fake alert will pretend to scan your computer for security threats and display numerous fake infections detected on your system, with solely intention to scare you into thinking that your PC is infected by risky malware. If you click ”Remove” button to remove this malware you will be redirect to payment site. Win7 Home Security 2013 Rogue software looks just like other legit malware and spyware scanner from the appearance but actually it is a malicious program that wants to rip your money off. Don’t take in by this warning. If your enter your banking information as requested by Win7 Home Security 2013 Malware, your money will be stolen from these Internet criminal who design this program to record track of your your credit card account. It is annoying fake warning and actually it is a big scam. You must get rid of Win 7 Home Security 2013 Virus completely. 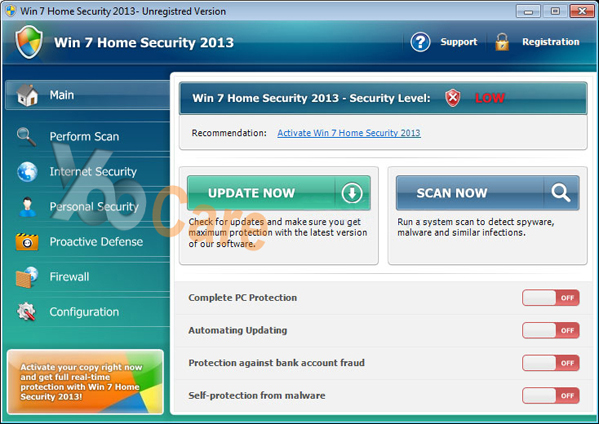 How Do You Know If Your Computer Was Infected With Win 7 Defender 2013 Virus?

“Computer security is at risk! Your PC is still under malware attack. Dangerous programs were found to be running in the background. System
crash and identity theft are likely. Remove malware now and get real time intrusion protection?”

“System hijack!
System security threat was detected. Viruses and/or spyware may be damaging your system now. Prevent infection and data loss or stealing by running a free security scan”

“Virus infection!
System security was found to be compromised. Your computer is now infected. Attention, irreversible system changes may occur. Private data may get stolen. Click here now for an instant anti-virus scan”

What can Win7 Home Security 2013 Virus fake AV do on my computer?

Numerous PC users have suffered from the infamous Win7 Home Security 2013 Fake Alert in recent years. It is a fake antispyware which is created to block your computer and scam you into paying for the penalty. It has many variants, like Win 7 Internet Security 2013 virus, Win 7 Antivirus 2013 virus, Win 7 Antispyware 2013 and Win 7 Security 2013 virus that have spread from America to all over the world to infect as many computers as possible. Once being captured with Win 7 Home Security 2013 rogue program, various harmful effects can be noticed: lots of pop-ups and warning messages on your computer screen; your searching history and your personal identification number such as your credit card number, social security number being recorded and send to a third party; accidental boot ups etc. It results in improper functioning of your computer system.

Win7 Home Security 2013 Virus comes from the dangerous group of rogue anti-virus programs which is designed to block your computer. It is an evil virus that blocked your internet access, task manager and registry editor. And it prevented from running any virus removal tool to kill it. You opened up an email on your computer and your computer got blocked saying that you have many viruses on the computer, and it is in high risk. Is there a best Win 7 Home Security 2013 virus removal tool? No. No anti-virus programd can delete it but manual removal with expertise. YooCare/YooSecurity provides the most professional online PC service. YooCare experts can plan out a solution to access your computer in safe mode with networking at first. When it’s possible to do that, their experts will do as follows:

Step B: Press Ctrl+Alt+Del keys to open the Task manager to stop the progress of Win 7 Home Security 2013 spyware. Because the name will be changed fast, it will be show with different name.

By the way: Just be attacked by Win 7 Home Security 2013 rogue antispyware? I don’t think it’s legit or is it? It is fake. Manually remove Win 7 Defender 2013 rogue thing is a rather difficult work, if you are not a professional computer expert. We recommend you to get YooCare online service 24/7 in time. This is the real fastest and safe way to remove it.

Note: You need to figure out that if you have Win 7 Home Security 2013 Fake AV installed on your computer, you will not trick by its scam to buy their license key but to remove it  according to following step-by-step guide. Or it can cause a complete computer crash.

But sometimes you cannot find it. If so, you should close all the windows and go to the start menu open the registry editor. This manual removal is a highly complex task, we recommend you to resort to PC tech support online.