Astrill adopts strong encryption method – AES-256 bit encryption which is the most advanced encryption. It is a kind of military encryption. All your data will be protected by this AES-256 encryption. Astrill has a strict Non-logging policy, so no data or logs will be kept. There is unlimited bandwidth, unlimited server switching and unlimited speed. If you have any problem about the Astrill Service, you’re welcome to ask Astrill support, they are 24/7 friendly support. Many different VPN technologies like OpenWeb, StealthVPN, RouterPro VPN, OpenVPN, PPTP, L2TP/IPSec, SSTP and Cisco IPSec. Astrill VPN supports both UDP and TCP connections with custom ports e.g. port 53, 80, 443, etc… You can use ANY port (1-65535) with StealthVPN (our modified version of OpenVPN), depending on your preference. 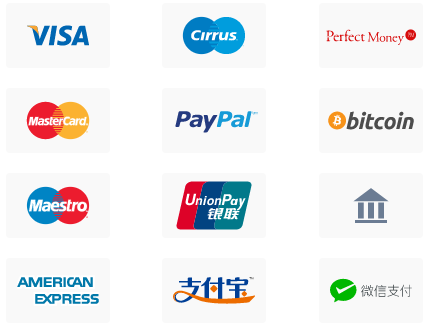 All plans include following features:

Your business information including business e-mails, online banking, corporate plans or accounting numbers are vulnerable to hackers and organizations trying to spy on you. Luckily, you can protect all your network communication with Astrill. Astrill business VPN solution uses military grade encryption protocols to avoid third-party espionage from governments, ISPs or industry competitors. With accounts for each employee you patch every possible hole in your office online security.

No Astrill Coupon Code Existed Now So Learn More About Others

What VPN Technologies does Astrill Offer?

Astrill VPN is trusted by millions of users worldwide as Astrill provides different remarkable VPN technologies like OpenWeb, OpenVPN, StealthVPN/RouterPRO and Cisco IPSec, which are all advanced VPN protocols used by Astrill VPN and Astrill also applies other VPN protocols like IKEv2/IPSec, L2TP/IPSec, SSTP and PPTP.

OpenWeb is a remarkable proprietary protocol developed and engineered by Astrill. It is built on TCP and encrypted in multiple security encryption and authentication layers. You can switch between servers within seconds without waiting for VPN software to reconnect as it is a connection-less protocol. It works perfectly even in the countries with high censorship like in China. It’s difficult for DPI (Deep Packet Inspection) to detect OpenWeb, so all the traffic looks like regular browsing and no one knows you’re using VPN. OpenWeb protocol is encrypted with AES-256 encryption.

2. StealthVPN protocol – Strong Enough to Bypass the Most Intensive Censorship

Stealth VPN protocol is a strong connection that has a strong performance to bypass Deep Packet Inspection (DPI) firewalls and provides invisible VPN access anywhere in the world. it uses Obfuscation technology to bypass the firewall system detection and any kind of Anti-VPN tools. Stealth VPN is stable and works well with both UDP and TCP modes. StealthVPN has a dual layer of encryption which makes it hard to be detected and blocked by countries with high censorship like China, UAE, Iran, Cuba, Russia, etc. Stealth VPN lets you get around VPN blockades and tunnel through firewalls, so you don’t have to have your network activity monitored. StealthVPN data streams are protected with AES-256 and authentication is done with certificates.

A ‘Stealth VPN’ is simply a VPN server or protocol that is able to disguise VPN traffic as regular web traffic, even when subjected to deep packet inspection by your network administrator or firewall. Stealth VPN can either be implemented on a server or protocol. ‘Stealth’ VPN technology scrambles or disguises your VPN traffic, making it unidentifiable as VPN traffic, or disguising it as regular TLS encrypted web traffic. Using a VPN service with obfuscation or ‘stealth’ technology allows your VPN connection to rewrite or obscure the packet headers, so it’s unrecognizable. StealthVPN feature is strong enough to make Astrill VPN survive in China with intensive censorship. Therefore, Astrill VPN is also one of the best and strongest VPN working in China! 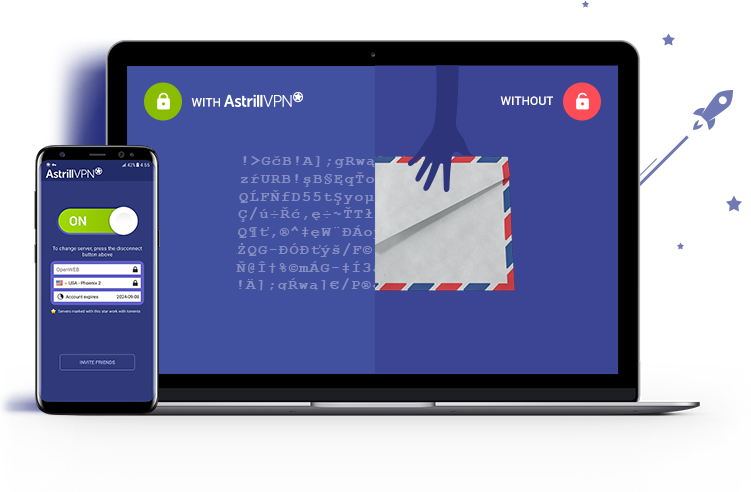 OpenVPN is a very flexible protocol that is widely supported across platforms. It can work over UDP, which provides fast speed, or TCP, which provides higher reliability and stability. OpenVPN allows for multiple types of authentication methods, but ultimately uses SSL/TLS (similar to your web browser) for key exchange. While it typically offers faster access speeds than L2TP, it also requires a third-party software and certificate files to be installed in order to use it. So, you can connect to OpenVPN with 3rd party clients and set up VPN connection without the need of any Astrill software. 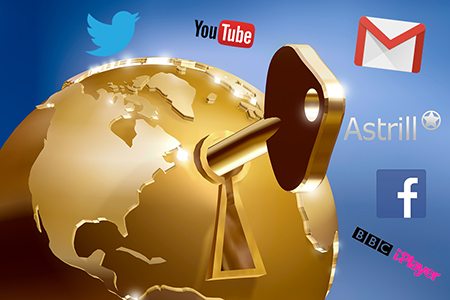 L2TP/IPsec – L2TP over IPsec is more secure than PPTP and offers more features. L2TP/IPsec is a way of implementing two protocols together in order to gain the best features of each. In this case, the L2TP protocol is used to create a tunnel and IPsec provides a secure channel. L2TP is most often used together with IPSec (Internet Protocol security) which guarantees very strong encryption on packet level at the expense of speed. L2TP operates on a fixed UDP ports 500/4500 which makes it easily blocked by firewalls (e.g. in China)

SSTP stands for Secure Socket Tunneling Protocol. It is Microsoft proprietary protocol and used to be available for Windows only. Recently Linux and Android 3rd party clients were released. As it uses TCP over TCP it doesn’t provide very fast speeds. SSTP uses SSL (Secure Sockets Layer) over a fixed TCP port 443 which makes it appear as general HTTPS traffic and hard to block by firewalls. SSTP is considered to be a very safe protocol.

PPTP is a very basic VPN protocol based on PPP. PPTP was the first VPN protocol supported on the Microsoft Windows platform. The PPTP specification does not actually describe encryption or authentication features and relies on the PPP protocol being tunneled to implement security functionality. PPTP tunnels a point-to-point connection over the GRE protocol.

When using VPN, you connect to the entry node and traffic is then routed to the exit node from where it continues to access the Internet. This is extremely useful to improve privacy, as anybody sniffing on your traffic sees that you connect to server A with IP 1.2.3.4. They may then suspect that you are using VPN and check what server A with IP 1.2.3.4 is accessing. Even though there are thousands of other users accessing the server A with you and browsing online content through it, the attackers can get some limited information about what IPs you may be connecting to by monitoring network activity on server A. 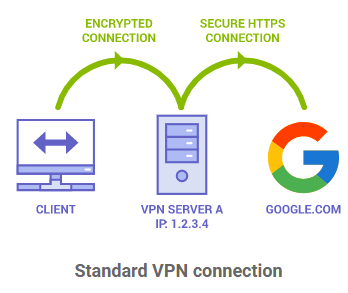 This risk is eliminated with multi-hop VPN connection available for all Astrill VIP users. After you connect to Server A, it does not access Internet directly, but instead passes the request through an encrypted tunnel to server B. Server B then executes the request and forwards reply back to server A, which sends it back to you. It becomes extremely hard to track where traffic from user goes and from where it returns. 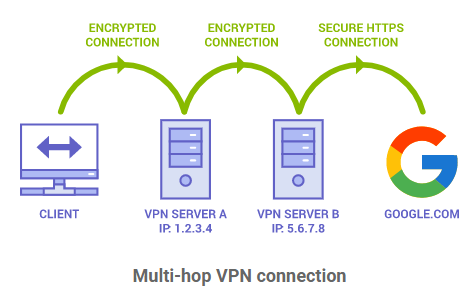 Packet routing is altered with multi-hop VPN, so when connecting to certain servers, speed is higher and latency lower than with standard VPN or even with no VPN at all. If you need to access website in Japan from Canada, by using multi-hop VPN server USA – Hong Kong you are communicating via fast link with our US server and the traffic is then routed through our optimized routes to the final destination in Japan. This will result in higher speed than routing from Canada to Japan directly, because our servers are on premium links and they can exchange data between each other faster. 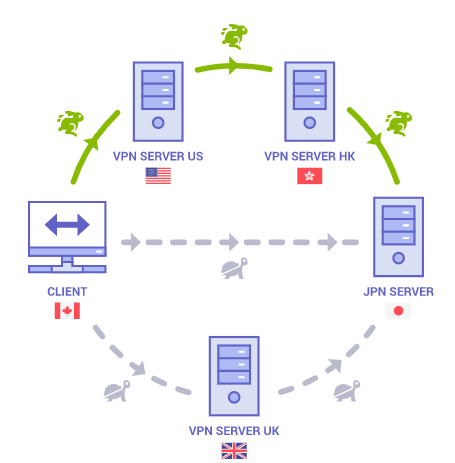 Astrill VPN Routers: Connect all your devices to VPN

Astrill VPN routers are also very famous and used by millions of users all around the world. you can connect all your devices to VPN. It is very useful and affordable. Astrill VPN routers offer you the ability to share your VPN connection with multiple devices on your network, including PS3, XBox, Roku Boxes, Boxee, Apple TV, iPhone, iPad, Android mobiles, Android tablets, all your computers and laptops and any other devices that can connect to a router for Internet Connectivity (through Wi-Fi or LAN). Why Astrill VPN routers are so popular with so many people all around the world? what strong and solid features of Astrill VPn routers are loved by internet users? 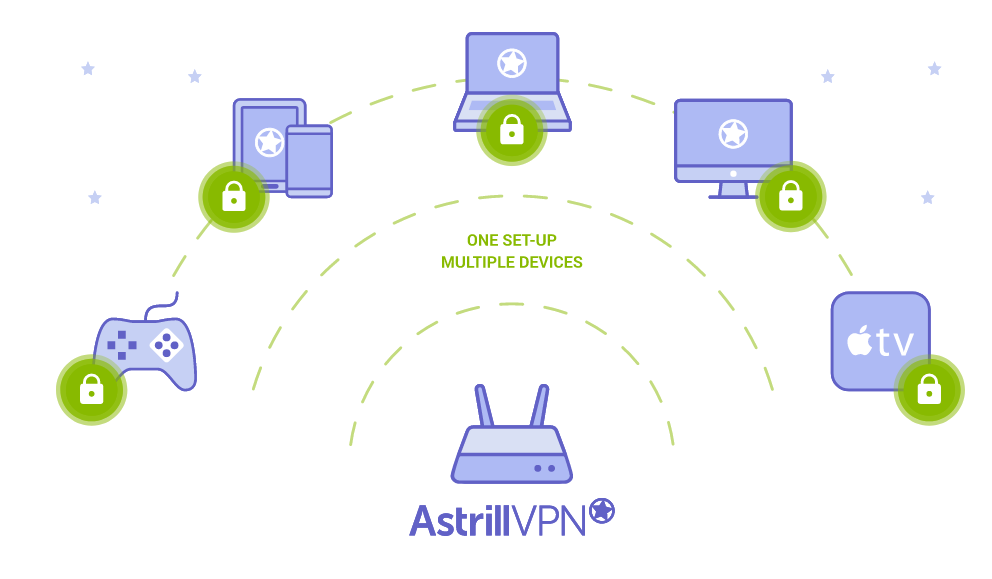 The Most Unique and Outstanding Service: Astrill Business VPN Protecting Your Company

Every day we deal with different data and information while doing work in office on the internet. we need to send and receive sensitive information and data through internet from mobile phone, laptop, desktop PC and tablet. All the sensitive information and data includes business e-mails, online banking, corporate plans or accounting numbers. Your business is vulnerable to hackers and organizations trying to spy on you. Luckily, you can protect all your network communication with Astrill Business VPN plan. With accounts for each employee you patch every possible hole in your office online security. Astrill Business plan includes Ultra-fast VPN servers in 50+ countries, free 100 GB data on VIP servers, multiple VPN protocols choosing from OpenVPN / StealthVPN / OpenWeb / L2TP / SSTP, apps for Windows, macOS, android, iOS, Linux and routers. You can benefit a lot from Astrill Business Plan:

Astrill VPN has been proved to be one of the strongest and best VPN working in China, unlike other VPN competitors, Astrill VPN has a strong ability to circumvent Great Firewall in China. therefore, Astrill VPN has thousands of users from China. Astrill VPN is powered by Stealth VPN protocol which makes Astrill VPN bypass the detection of the Great Firewall and other internet censorship in China. ‘Stealth’ VPN technology scrambles or disguises your VPN traffic, making it unidentifiable as VPN traffic, or disguising it as regular TLS encrypted web traffic. Using a VPN service with obfuscation or ‘stealth’ technology allows your VPN connection to rewrite or obscure the packet headers, so it’s unrecognizable. StealthVPN feature is strong enough to make Astrill VPN survive in China with intensive censorship. since Astrill VPN is equipped with strongest protocol Stealth VPN, it also definitely works in other countries with high censorship like in UAE, Iran, Israel, Syria, India, Korea and more. you can visit any websites from anywhere and anytime as long as you turn on Astrill VPNon your device and run the network connection. With Astrill VPN, you can access all these popular websites and apps Facebook, Twitter, WhatsApp, Snapchat, Viber, Google, Gmail. You also can stream videos and movies from Netflix, BBC iPlayer and Hulu in HD at a fast streaming speed.

Astrill VPN is an awesome VPN service that is considered by many users. If you have read this Astrill VPN review, you must undestand you can use it to surf anonymously as it can hide your IP address and your online identity, because Astrill VPN is supported by numerous strict protocols. You can enjoy secure WIFI anywhere because Astrill has strong AES-256 encryption method which encrypts all your data and information completely. The widespread Wi-fi connectivity comes with a risk as people using the same network can easily hack unprotected users. That’s why Astrill VPN allows anybody to join a hotel, coffee shop, bank, airport or any other public network without the risk of being hacked. It’s no problem bypassing the internet censorship with Astrill VPN. It can help you unblock online contents in any countries. Astrill VPN hides your IP address to hide your real locations, which really geospoof the websites, then you can go around the geo-restrictions and watch such popular streaming services as Netflix, BBC iPlayer, Hulu anywhere. Astrill VPN is the best choice to protect privacy, security, access blocked websites and stream geo-blocked Hulu, Netflix and BBC iPlayer! Although Astrill is recognized as a good VPN, many people feel it is a little bit expensive. So we recommend ExpressVPN, IPVanish or VPNArea as they are also great VPN services with lower pricing.