Pinterest came to life in March 2010 and was founded by Evan Sharp, Paul Sciarra and Ben Silbermann. It is not only a popular social media platform, but also a powerful search engine rivaling with Google. While the other popular social media sites focus on content and messages, Pinterest focuses on images. Pinterest helps you discover and save creative ideas, you also can use it for buying or selling purpose. Typically, people pin or save images they found on the web to different boards which are used to categorize their image collections. Many of the images saved on Pinterest are clickable, so if you click on an image, it will take you back to the source it was pinned from. Most people use Pinterest to collect multiple ideas, bookmark them and read later. And brands and retailers can also pin their products to Pinterest and have them link back to their website. This way helps them drive more traffic to their websites and generate sales and increase global awareness. Pinterest is a hub for product discovery. Whether you are looking for a source of inspiration, or simply need a platform to promote your brands, Pinterest has all you covered. 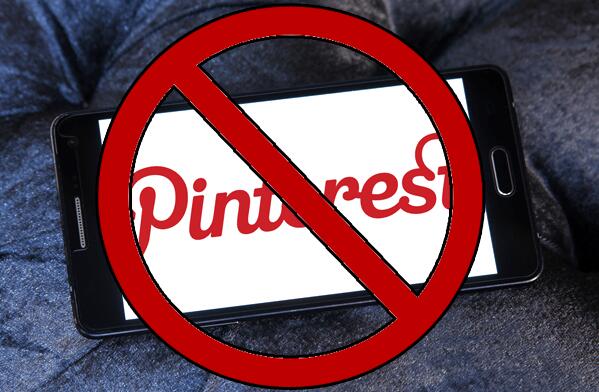 For years, Pinterest has been freely accessible in China, most likely because its users typically don’t share content that would rattle Chinese censors. However, things have been changed. In March 2017, Chinese authorities blocked Pinterest without giving an explanation. Therefore, this photo sharing site has joined Facebook, Google and Twitter as another popular media site that’s blocked by China’s Great Firewall, a tool Chinese government uses to keep its citizen from accessing certain part of the internet. China’s internet censorship system has blocked many popular services such as Instagram, WhatsApp, Telegram, Vimeo, Flickr, Gmail, Dropbox, Line, Blogger, Github, Snapchat, etc in China. It’s not a surprise that Pinterest gets blocked as well. Some in the media have speculated that the block related to the Two sessions, because it happened at a sensitive time in Beijing when China’s top leadership and thousands of delegates gather to set the country’s political and economic course for the year.

China’s censorship has effectively become a tool of industrial policy to discriminate against foreign competitors. Banning Western rivals gives Chinese tech companies a huge advantage. The Pinterest block directly brings benefits for Alibaba Group’s social shopping platform Fa Xian, which also lets users “pin” images of items on virtual pinboards, where others can then post comments. Two other Pinterest clones Mogujie.com and Meilishuo.com also have proved a huge success in China. Thankfully, there is still a way to unblock Pinterest in China. Continue reading to find out the best way on how to access Pinterest in China.

Accessing foreign content can be complicated in some countries because of strict censorship that blocks certain content from their citizens. This can be found in parts of the Middle East, and China is in its own league with the Great Firewall. You may find that Pinterest is blocked, as well as other social media in general. Although China’s Great Firewall has cracked down on Pinterest, it doesn’t mean you can’t access Pinterest in China. In order to avoid China’s censorship, you’ll need a new IP address that signifies you that you are not from China. Speaking of the IP address, every computer has a unique IP address, which can define the location of the user. So, If you are able to change your IP address, then it is easy to bypass the censorship in China and access any sites you want. To achieve that, you’ll need a VPN.

A VPN stands for Virtual Private Network. It not only mask your IP address and allows you to bypass the Great Firewall of China, but also encrypts your Internet traffic to give you more anonymity while browsing. Best VPNs like ExpressVPN and NordVPN will even use best-in-class 256-bit AES encryption to keep your entire connection safe from attackers. By changing your location with the help of a VPN, you are able to overcome firewalls and bypass restrictive networks and censorship when you travel abroad, as well as defeat data retention and save money on travel and shopping.

When it comes to choosing the best VPN for Pinterest, you should take privacy policy, no internet traffic logs, encryption methods, secure measures like Kill Switch, IP leak protections, DNS leak protection, servers network, jurisdiction, data or bandwidth usage and more into consideration. Like mentioned before, the best VPN for Pinterest should offer 256-bit AES encryption and OpenVPN, SSTP, L2TP, IPsec, IKEv2, and PPTP protocols, and also follow a strict no logging policy. This ensures your online activities, browsing histories, traffic data or DNS queries or anything that could be used to identify you will never be logged. And if you have many devices handy, you should check how many simultaneous connections the VPN provider allows before you purchase. Some VPNs just give one device login simultaneously, but the best one always allows up to five to ten simultaneous connections. Now there are multiple VPNs on the online market. If you are a beginner who use VPN tool first time, here we will give you some recommendations that helps you unblock Pinterest in China safely.

ExpressVPN is the leading VPN for getting around the Great Firewall of China and it is #1 trusted leader in VPN. It works fine with Pinterest and excels at unblocking popular geo-blocked content. ExpressVPN has 3,000+ VPN servers in 160 VPN server locations in 94 countries, so you shouldn’t have any issues finding one to bypass the Pinterest block. There are mobile apps for Android and iOS available and desktop clients for Windows and Mac, keeping you secure on whatever devices you have. As a top class VPN, ExpressVPN offers unlimited bandwidth and unlimited server switch, along with other advanced features like Split tunneling, Kill switch, DNS/IPv6 leak protection, Zero-knowledge DNS, No Logging Policy, 256-bit AES encryption and more. Their customer support is readily available 24/7 and will assist you with whatever your needs are. Even better, torrenting is allowed on all ExpressVPN servers, and it usually has a handful of servers that work with Netflix. With ExpressVPN, not only you can unblock Pinterest in China, but you also can rest assured that your data won’t be read, hacked, or stolen by your ISP, the government, or malicious entities.

The price of ExpressVPN starts with $12.95 per month, which is a bit higher than their competitors. However, the service is offering a flat 49% discount on its yearly plan with further 3 months free now. Concisely, ExpressVPN is offering 15 months package at the price of $99.95, equivalent to paying $6.67 per month. Even better, ExpressVPN offers a 30 days money-back guarantee. If you are not satisfied with the service, you can always get a refund. No questions asked. Unblock any sites on any device, in any place, at any time with ExpressVPN. Try Risk-Free Today!

NordVPN is also a good option for unblocking Pinterest in China. Its vast and speedy network of reliable servers that work great with Pinterest. This VPN has the best jurisdictions as it is based in Panama where there is no mandatory data retention law. And Nord understands the need for privacy and security and therefore declines to store any customer data. There’s no traffic or sessions logs of any kind. Currently, NordVPN provides over 5100 VPN servers in 60 countries across the world. And features like Kill Switch, 6 Simultaneous Connections, CyberSec, DNS Leak Protection, Double VPN, Onion Over VPN, SmartPlay greatly enhance the security of user’s Internet traffic, so they can browse and stream indefinitely with peace of mind. NordVPN is the best solution to get access to blocked websites, online services, and applications in China.

NordVPN pricing is quite flexible. Their 1-month plan is available for $11.95, but if you pay a year upfront, you will get a significant discount. NordVPN also offers 2-Year Plan and 3-Year Plan. The longer you pay, the better value you get. You can get its 3 years plan with a price of $3.49 per month. That means you can enjoy online anonymity for 3 years by paying $125.645 only. All subscriptions are covered by 30-day money-back guarantee. Browse your favorite sites like Facebook, Twitter, Pinterest, Netflix, Hulu, BBC iPlayer in China with NordVPN now!

IPVanish VPN is also one of the pioneers in the VPN service with 40,000+ shared IPs, 1,300+ anonymous servers in 60+ countries, zero traffic logs, and 24/7 customer support available. This VPN company owns and manages its own servers without relying on any third parties. So, IPVanish VPN will never keep logs of your online activities. This VPN is available for Windows, Mac, Android, iOS, even Amazon Fire TV, as well as Linux, Chromebooks and other platforms. It comes with protocols support of PPTP, L2TP/IPSec and OpenVPN and provides 256-bit encryption to keep your data safe. One of the main selling points for IPVanish is it allows up to 10 simultaneous connections. Once you subscribe to IPVanish, you can be sure of unlimited bandwidth, as well as no limits on the switches you make to your server connections. The VPN gives you the strong ability to bypass the detection of Great Firewall of China and lets you visit any websites and apps banned by the censorship.

IPVanish VPN offers three basic plans. And currently, the best value plan is their 1-Year subscription, which is available for $77.99, a saving of 46% on the monthly rate. The monthly rate is currently available for $10.00/month while the 3-month membership is billed at $8.99/month. This is decent value for the features you’re getting, and additionally you will have 7 days money-back guarantee. Experience unrestricted Internet access to every corner of the globe with IPVanish VPN now!

Pinterest is the most popular social media platform for letting users share, or pin, items of interest to a virtual board. At this platform, people can find new ideas for their projects and save them for use one day. However, this useful photo sharing and visual bookmarking social media site was no longer accessible in China anymore. It is not initially clear why the website has suddenly been blocked but some media said it may be due to the Two Sessions period. Whatever the reason is, the Pinterest makes Chinese fans and expats living in China extremely frustrated. However, thanks to VPN technology, Pinterest fans can still access this service in China. Gaining access to Pinterest through a VPN ensures that you will have complete online freedom and a safer browsing experience. With a VPN, you’re able to manipulate your IP address and have sites tricked into thinking that you’re based in the US or wherever you may want. This way you’ll always have access to the Pinterest site when every time you want to.
Up to now, you understand how to access Pinterest in China, correct? Be aware that the Chinese government has implemented measures to block traffic that looks like it comes from a virtual private network (VPN). Only certain VPNs work in China. Just make sure you get the right VPN, and set up before you go because it’s much more difficult to install a VPN in China.