What’s wrong with my computer? I can’t use my computer anymore! The only thing now I can see is the window of Windows Antivirus Patrol. It says that my computer is at risk and I really worry about it. It also tells me that in order to get rid of these threats, I need to purchase the product as it is only a trial version now. Should I pay for it? Why it won’t allow me to use my computer? Nothing else can be opened. What exactly should I do now?

Brief Introduction to This Program

Windows Antivirus Patrol is a new released fake anti-virus program which has the same characters with the Windows Security Booster and Windows Protection Tool. They come from the same computer virus family. The whole program is a virus but pretends as a useful application for computer. It targets on Windows machines, from Windows XP to Windows 8, none of them can be escaped from its infection. As a virus infection, this rogue ransomware can be spread more widely than other kinds of viruses, the reason is that people can be cheated by its name and appearance. Hackers who design this virus can also forge an exaggerated description of it to entice people to download it from the Internet. Also, this virus can use other free programs to spread, this virus can also disguise as an optional program in other programs for people to install.

The Screenshot of This Fake 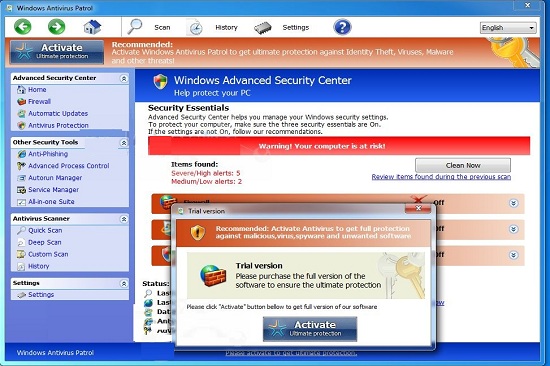 For those people who are not computer literates, in order to get their computer be protected, they always rely on different kinds of security tools. So, this vicious program can be spread to thousands of computers all over the world in a short time as it cheats people to believe it is used for computer protection. Once this Windows Antivirus Patrol is installed, the whole system can be in great trouble. The first thing for it to do is to disable the real anti-virus program installed in the infected computer. To achieve this, it can modify the windows registry and add its entry to it so that it can start the infection once the computer is on. Also the whole process is undetectable, and once people notice their computer get troubles, the virus has already finished its corruption work on the system.

Not only the legit anti-virus program can be banned, the windows firewall can also be shut down. With this bad situation, the entire protection system is useless, many other viruses and compute threats can invade with the help of this rogue anti-virus program. The main purpose for this Windows Antivirus Patrol is to threaten people to pay. In order to make it be more convincible to user, this fake program is designed with a professional looking window which is not a real. This virus can pop up its window and block other program, after that, it will do a full scan on the computer hard drive, few minutes later, the PC user can be told that the computer has been infected by many viruses and threats which need to be solved immediately. However, if people want to remove those problems by this fake program, they are asked to purchase the product so that it can provide ultimate protection. Actually, the whole scan and result are phony; the only one thing for it to do is to cheat people to pay. What’s worse, if people don’t want to pay, this window can block the whole system and won’t let people to do anything else.

The properties of the Infection

-Always pops up once you boot up your computer or run a program, claiming your computer is in great risk
-Asking you to purchase a code to activate this software, so that it can help you to remove the threats in your computer
-Can modify the computer registry once it is installed into the computer
-Can prohibit legit program to run, including your anti-virus programs.
-Can occupy a great usage of CPU, which slows down the performance of computer or even causes blue screen.

Finding all or some of these symptoms on your computer, sorry to say that your computer is infected by Windows Antivirus Patrol. Please contact YooSecurity Online PC Experts for manual removal guide. Also, we will provide a short removal guide below for computer literate.

Step 2: Find Ctrl, Alt, and Delete these 3 keys and then press them together to open task manager to end the process related to Windows Antivirus Patrol, the name of the process of it is random.

Then try to find Windows Antivirus Patrol, highlight it and choose Remove.

Windows Antivirus Patrol is a malicious fake anti-virus program which can infect computers with Windows operating systems. It can block other programs and the whole computer system until people pay for this fake program. Under no circumstance should victims pay for it. The whole thing is a scam. It threatens innocent people that their computers have been infected by many computer threats which must be solved quickly. Do not be taken in. It is totally not real. All you need to do is to remove it.

Suggestion: To follow removal guide that mentioned above, a quite level of computer knowledge is needed. Still can’t get out of Windows Antivirus Patrol? Contact online experts for help now!