My laptop has been screwed up by this Titan Antivirus 2013 Virus. I didn’t mean to install this malware into my laptop not. Anyway, I don’t know when and how this fake thing accessed my computer. Now it taking over my computer and modified many terms of the operating system settings. I really don’t know how to get rid of it. I tried to uninstall it but it can’t be uninstalled from the control panel. Who can help me to kick out this stomach-turning malware from my laptop? Help please!

Titan Antivirus 2013 Virus appeared in many users’ PCs recently. With a fraudulent name and GUI, makes people think it’s a legit and strong computer baseline shield. However, it does completely opposite things to people. That means it doesn’t provide you any protection to your computer, instead, it may place your computer in a bad condition. The annoying virus at first makes your real protection software unavailable by violence, and then it takes place of it as if it’s a much better program to give your computer a complete protection. If you really believe that, you are fully wrong. Many PC users have been infected this virus. What? It’s a virus? Yes, I’m not telling you the wrong information. Titan Antivirus 2013 Virus is a malware that can place your computer in very dangerous position. With a charming and fashionable name, lots of PC users have been deceived into downloading and installing this fake thing. Almost all of them thought it was a very powerful anti-spyware. How did they know that it was thoroughly a virus but not an anti-virus?

Titan Antivirus 2013 Virus appeared in many users’ PCs recently. When it enters your PC, it takes over of your legit antivirus and starts to give out a report with a fancy and standard interface alerting you that your computer has been infected with much virus. Then it will pretend as if it’s scanning something which is of course nonsense, even, it won’t do anything of scanning. What the information shows you just want to make you be convinced. Then after not a long time, it will display that your computer is in very dangerous state that your computer has so much viruses. The first reaction of you may be like this: “Oh my god, how could it be? How did I get that stuff?” Don’t worry about it; all those displayed viruses don’t exist in your computer at all. “You should remove all those viruses by using Titan Antivirus 2013 as soon as possible” this is the further alerting information after the Titan Antivirus 2013 Virus finish so called scanning.  And when you really want to use Titan Antivirus 2013 to do that, it will tell you that you don’t have the authority to do that before you obtain the full version. That means you have to pay money to buy this fake program. This is also the final purpose of this malware.

Titan Antivirus 2013 Virus will control your computer without your permission as if it is the owner of the computer. You may be not able to use some legitimate programs in your computer anymore. They will all be blocked by Antispyware 2013. So you can’t use any anti-virus to remove this fake thing. Even you can’t remove it from control panel. The only feasible way is to remove it manually with expert skills. Never delay, you’d better get this stuff off your computer as soon as quickly. It is worth mentioning that is similar to many other malwares or maybe just the name is different. Now it’s launching a global offensive.  Be careful when you are surfing the Internet. The virus may be concealed in some place to attack your computer. 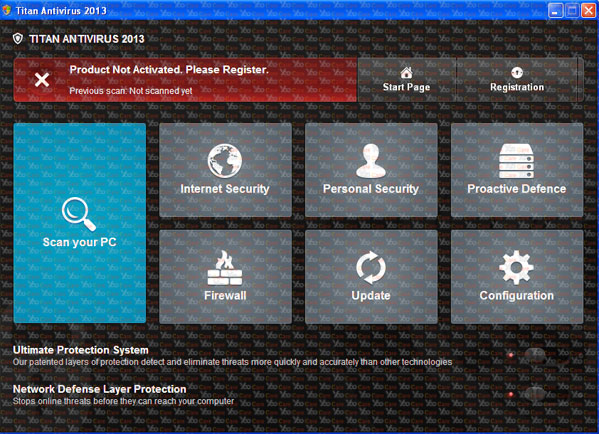 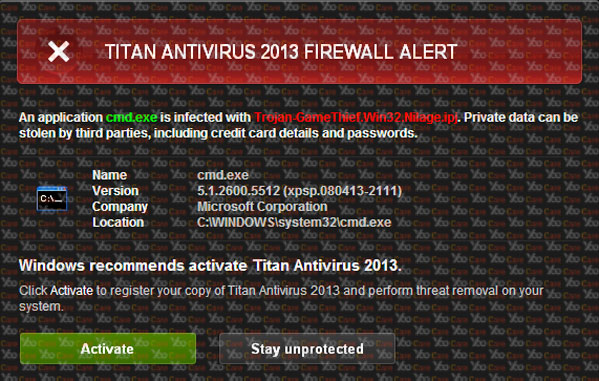 A. Your previous formal anti-virus programs will be replaced by Titan Antivirus 2013 Virus.

D. You almost can’t do anything freely with the virus in your computer. Fake anti-virus will block almost all programs running.

E. The fake thing slows down your computer.

Step 3: Press Ctrl+Alt+Del keys to open the Task manager to stop the progress of Titan Antivirus 2013 Virus. Because the name will be changed fast, it will be displayed with different names with random letters.

Login to profile in which you are getting Titan Antivirus 2013 Virus Fake…
Go to my computer
Then press ALT button once
Go to tools on menu bar
Goth select Folder options…
Click on view tab
Select Show hidden files, folders, and drives
Click OK button

Kindly remind: When you got this Titan Antivirus 2013 Virus infection, you always can’t run any programs. This means you can’t download software to install. So you can’t even run a real anti-virus to start a scan. What’s worse, at present, no such perfect anti-virus can remove this virus completely. If you someone is familiar with the virus and has much computer knowledge, you can follow the steps above to remove the virus. However, usually, all the associated files of the virus would be named randomly. That is to say, different computers may have different file names. So to distinguish the files of the virus is the real hard job. For safety and convenience, to find an PC expert to help you remove this virus is your best choice.

Tips: To contact an expert such as YooCare/YooSecurity for professional service will make you at ease if you really don’t know how to remove the Titan Antivirus 2013 Virus: