Do you get a pop up message ‘Svchost.exe Corrupt Disk’ on your computer constantly? Are you capable of understanding what it’s reporting? Is there any system problem about corrupt disk? Can it cause any dangers if one just leaves the message there? How does one verify this problem and then fix it without losing any personal and important data?

Svchost.exe Corrupt Disk is a pop up alert that computer users can see usually in the bottom right corner of the computers. This pop up message uses some codes that ordinary computer users can’t understand. But they can be annoyed by the constant pop up of this alert. As a matter of fact, this pop up alert is a fake message representing nothing true about your computer status but just trying to get you to install a malware called System Repair. By constantly pop up in bottom corners of the computer screen, this Svchost.exe Corrupt Disk virus prompts this malware to you by reporting potential threats in the system and threatening you that computer is not safe. This System Repair malware will then perform a scam on your computer once being installed.

This Svchost.exe Corrupt Disk fake alert doesn’t represent the true status about your computer but lies to you so that it can get you to install the associating malware. It is, thus, categorized as a potentially unwanted application or a malware distributed among malicious web sites and freeware. This malware, as well as the associating System Repair virus, can get themselves installed without permission from PC users. Once being installed, fake alerts using advanced computer codes and languages will be displayed on the targeted computers constantly trying to convince users that their computers are in danger. And as a solution, System Repair is suggested as a PC protection/optimization tool which can help fix this constant pop ups. What will happen after installing this application? One will be required to purchase the licensed version of this malware in order to get full removal performance. This is where cyber criminals try to scam you. So do not fall for this fake alert Svchost.exe Corrupt Disk virus and install malware on your computer.

Note: To save your computer from all the potential consequences, contact YooSecurity Online PC Expert now to get help if you are not an expert yourself who can deal with this Svchost.exe Corrupt Disk virus. 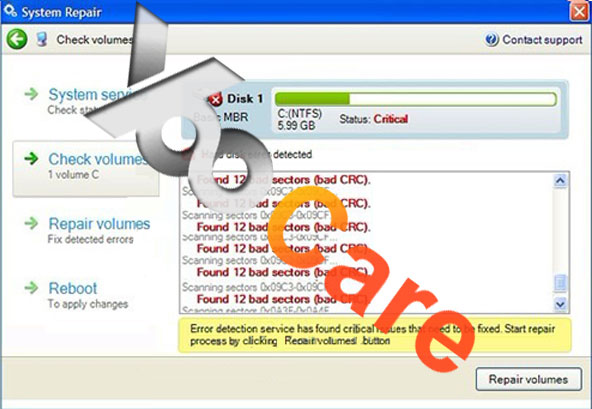 System Repair, a malware associating with this Svchost.exe Corrupt Disk virus, claims itself as a PC optimization/protection tool. This specific program, however, can cause many troubles and problems on computers. To begin with, it can get itself installed without consent through malicious web links and free software. And when it’s installed, System Repair malware will automatically pop up on your computer and start running checks through your computer. The constant pop up of this malware screen will stop you from doing other activities on the computer. It can report many infections and false statements to you trying to convince you that the computer is in a dangerous position. To fix these problems and prevent consequences like system corrupt from happening, according to this malware, you will need to buy the registered version in order to perform a complete removal.

Svchost.exe Corrupt Disk virus cannot be fixed by most antivirus programs while it can bring in another malware – System Repair. To stop this fake alert from popping up constantly, manual removal is suggested here as it guarantees a complete removal in the system. Expertise will be required during this manual process:

Step A: Open Windows Task Manager to end process related to the malware alert. To do that, press Ctrl+Alt+Del keys at the same time to pull up Window Task Manager.

Step D: Delete all these associating files and registry entries of the Svchost.exe Corrupt Disk virus in Registry Editor as below:

Similar Video On How to Fix Fake Malware Pop-up Alert

If you happen to be experiencing this pop up alert Svchost.exe Corrupt Disk virus on your computer, please do not believe anything it’s telling you or install any untrustworthy software on your computer. This annoying alert is believed to be associating with the mawlare System Repair which can turn out to be scamming you eventually. By threatening you with false statements about your computer that the system is in danger, this fake alert tries to get you to download the malware which promises to help you fix the problems. However, you will need to pay for a fake licensed version of the malware before usage. And once you pay, you won’t get any related services provided by this System Repair; neither will your computer be given an overall removal or tune up. What’s worse, your privacy security including bank account and credit card info could be stolen by cyber criminals with the help of this malware. Hence, it’s better to remove this virus off your computer instead of letting it do whatever it wants.

Note: Still getting this Svchost.exe Corrupt Disk virus pop up every once in a while trying to convince you to install System Repair malware? Please contact YooSecurity Online Experts now to save your computer from all the troubles and future consequences.