Do you want to get tips on how to remove XP Defender Firewall Alert virus from your computer? You might have experienced with: XP defender is blocking me opening software. It is fake system security alert that blocked your access to the internet! You are asked to Activate it to get XP Defender Reg Key now to update to the latest version for full protection! But if you paid for it then you are no doubt that you became one of the victims of the fake XP Defender system security alert. What to do after you realized it is a scam?

Activate XP Defender Firewall Alert to get full version? No, it is fake the same as Win 7 Defender. Computer viruses that detect viruses, display security alerts and report the detection of malware that is false are becoming very common. One of the most notorious ones is the XP Defender Alert virus and has been designed to resemble legitimate antivirus software that will rid computer systems of malware that may affect their computers. However, the reality is the program that once purchased and installed will continue to cause damage to the computer and also steal the money of the computer user. Since the fake program look real, some people have fallen victim to the scam and now seek to have the XP Defender Alert virus removed from their computers.

XP Defender Firewall Alert virus is distributed as well as installed through Trojans, which are one of the malicious types of viruses that cause damage to computers. When the virus has already installed itself in the computer as part of the Windows registry, it begins to run in automatic mode anytime an executable application is started. When this happens, the system becomes unable to run most of its programs that are legitimate including other types of antispyware and even anti viruses that have been installed in the computer. XP Defender Firewall Alert virus also imitates the scanning of the system with the result being a number of infections that must be gotten rid of through the purchase of its full version. For most people, such an offer is welcome as they would want to prevent their computer from getting damaged. However, all the alerts and messages are not genuine and therefore should be ignored. 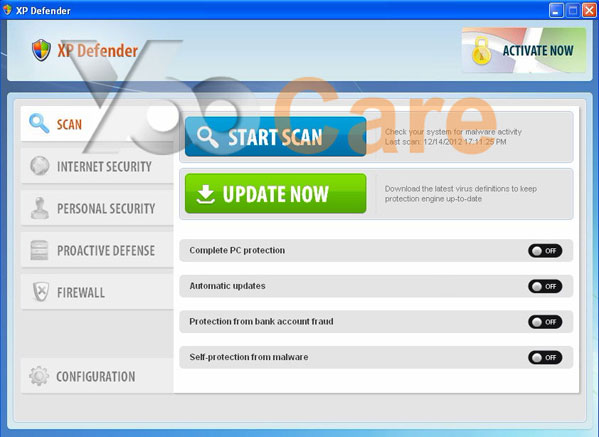 How Did You Suffer from The XP Defender Alert Virus?

The symptoms to look out for in regards to XP Defender Firewall Alert virus are many but some of the most common ones are alerts that the possibility of the computer being infected is high or the system has been hacked. Detection of identity theft as well as network activity that is suspicious are some other symptoms that indicate the infiltration of the XP Defender Firewall Alert virus. Also, there are times when messages of unknown programs scanning the system registry, and general alerts from the fake XP Defender 2013 pop up on the screen. Most times these alerts as well as messages are regular and seem urgent in a bid to convince the computer user to purchase the program.

To completely get rid of XP Defender virus from an infected computer is not easy as it stopped many programs. When you were on the infected computer and found the fake firewall alert was on it, and it  keeps popping up.  When you try to restart it will only restart in normal, but then as soon as your icons start to appear the virus windows appears and everything is blocked and when you try that it just keeps sending you back to the warning alert with all the options for restart – safe, safe with networking, etc. There are web pages that contain malicious viruses such as XP Defender Alert virus that will promptly infect a computer system and hinder its normal functions, so manual removal of XP Defender virus is required.

If you have followed the guide above correctly then you can get the virus off of your computer, and what you need to do is prevent from infecting with such fake firewall alert again. The prevention of the infiltration of the XP Defender Firewall Alert virus into a computer system largely depends on the level of security that is installed on it. It is important to install genuine antivirus software and keep it updated as regularly as possible so that the computer is not vulnerable to harmful viruses such as the XP Defender Alert virus. Furthermore, websites that are visited when browsing using the internet should also be monitored so as to avoid the ones that harbor malicious viruses which attack computers and cause damage to the system. Nevertheless, if a computer is infected by the XP Defender Firewall Alert virus it is important to have it removed as soon as possible to avoid further damage.

Note: If you are not computer savvy and don’t know how to remove XP Defender Firewall Alert virus, to save your computer in time, please contact YooCare PC experts 24/7 online to completely and safely sort it out.