What is registration key for windows 7 security plus 2013? How to get rid of win 7 security plus 2013 virus from windows 7? When I try to get on the Internet a pop up comes up saying “win7 defender firewall alert” and it will not let me get on. I tried removing it manually according the the instructions on this site i am currently in safe mode but when I try to open task manager it closes automatically, message on computer says Win 7 Security Plus 2013 unregistered version. How can i fix this?

What is Win 7 Security Plus 2013 Virus Firewall Alert?

The Win 7 Security Plus 2013 Virus has made its way onto the internet in the recent current events associated with malicious computer codes and their illegitimate interests in the current age.  It is the variant of XP Security Plus 2013 Virus Firewall Alert and Vista Security Plus 2013 Virus Firewall Alert. This harmful computer code is a member of the name changing viral infections previously found in other forms of a similar nature.  It employs the same techniques for disbursement that are utilized by other cyber space scam artists.  Inexperienced computer users often discover they have permitted this virus to enter their system after they have made some unwise downloading decisions.  It has also been transferred through the use of SPAM email or Trojan attachments that alert the client considering the download that it is a necessary software solution for viewing online videos.

When the Win 7 Security Plus 2013 Virus is inadvertently downloaded onto an inexperienced user’s computer system it will attach itself to internal components and can create a plethora of problems.  Viruses of this nature are designed and developed by illegitimate software programmers in an attempt to steal valuable and vital information of a personal or financial nature.  It can also create an atmosphere of corruption for the affected computer and cause the entire system to crash and become unrecoverable. Don’t trust the system security alert as it is a scam, just get rid of Win 7 Security Plus 2013 virus from your computer ASAP. 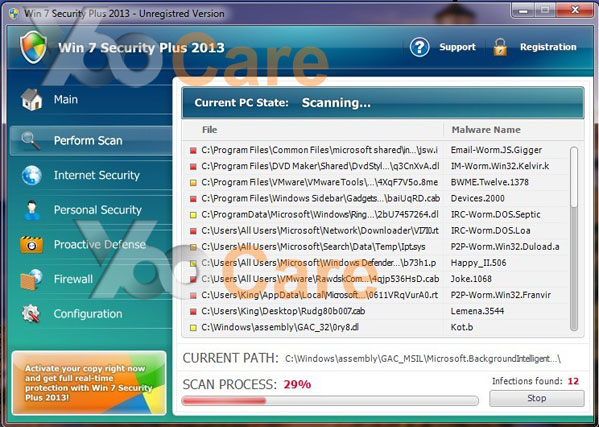 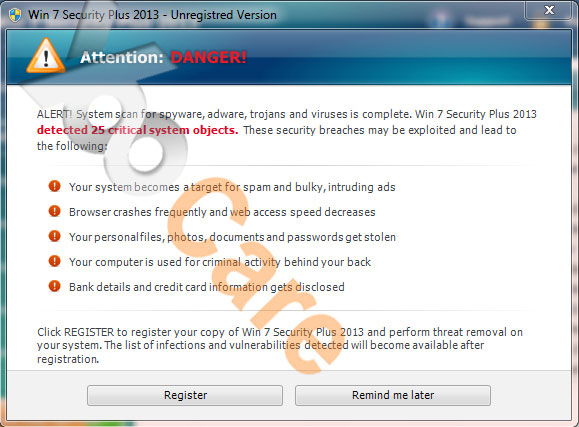 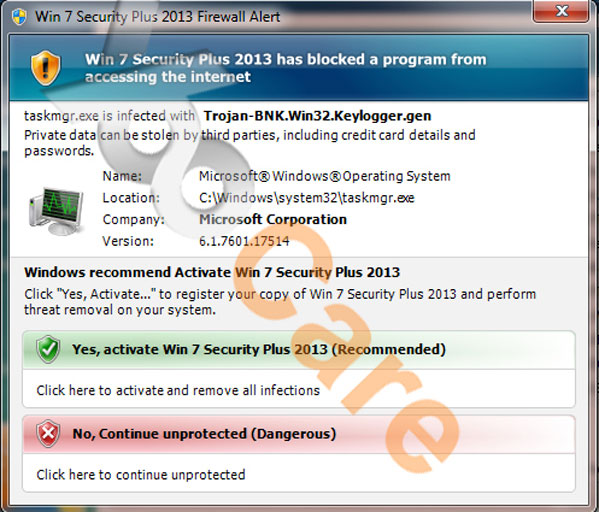 How Did Win7 Security Plus 2013 Attack Your Computer And Block The Internet?

Interested individuals can also elect to make a purchase and download from the original web site associated with the manufacturer as this will also eliminate the need for worrying whether or not the Win 7 Security Plus 2013 Virus is present in the downloaded product.  Stay away and avoid web sites which are found through the clicking of links.  Neglect the urge to click on links for software products you are unfamiliar with.  Disregard pop up alerts indicating the necessity to download or upgrade an existing application for the simple pleasure of viewing other online media formats.

How to remove Win 7 Security Plus 2013 Firewall Alert Manually?

There are ways to avoid getting the Win 7 Security Plus 2013 virus on your computer which will also assist you in protecting it from future attacks by any type of virus on the internet.  Curious or concerned software consumers should avoid downloading the contents of the product they would like to install from an unknown or untrusted resource.  Purchases of legitimate software products should be conducted at an establishment that sells prepackaged products of this nature.  A local computer store or repair facility should have copies of this sort available to sell to anyone with an interest. But it didn’t help and it is waste of time and money, you are required to get it fixed at a quick time as the malware mutates frequently. And there is not a nice antivirus software can fix it well, manual removal is the best way.

2. Press Ctrl+Alt+Del keys together and stop Win7 Security Plus 2013 virus process in the Windows Task Manager.

3. Delete associated files of the Win 7 Security Plus 2013 virus from your machine absolutely:

4. Search for all related registry entries infected by virus and wipe them out in no time:

Up to now, you should learn more on how to remove the virus and just cleaned it out of your computer. Next, establish an effective firewall for your computer system.  Each and every operating system in existence comes with a firewall protection program already installed.  Adjust the settings to provide the highest level of protection, especially on the computers that will primarily be used by younger or inexperienced internet participants. This method of safety and security will help prevent the possibility of allowing the Win 7 Security Plus 2013 Virus from being downloaded unknowingly.  With the proper firewall established the computer user will be prevented from visiting web sites with invalid or unproven security certificates which are put in place by web site owners that promote a legitimate online opportunity.

Note: If you are not computer wiz and to avoid making thing worse when you tried to remove Win 7 Security Plus 2013 virus by yourself, please don’t hesitate to contact YooCare PC experts 24/7 online for assistance.