The United Kingdom Police Virus is a high risk ransomware attack that blocks the users computer and demands that 100 pounds be paid in order to unblock the computer, all stemming from copyright violations involving downloading and sharing pirated files online. It is important to understand that the UK police will never just block someone’s computer, and they sure will not demand that a fine is paid through the computer. The people behind this computer virus are experienced hackers that have the goal of infecting as many computers as possible in hopes that many users are tricked into sending the money. Like the Police Cybercrime Investigation Department virus, AFP Ukash virus and PCeU virus, this fake warning screen first pretends to be the United Kingdom government police and puzzles users think it is real so that they are scared to pay, it says if the computer owner don’t pay 100pounds within 72 hours, they will be arrested. Computer went to white screen with submit box then force log out of safe mode, also after paying the fine your computer will be unlocked. These are all serious charges and will really open the eyes of the user, making them pay close attention to the warning message details.

There are other versions of this virus that belongs to the same virus family, but the United Kingdom Police Virus specifically targets users in the UK and anyone running a Windows based operating system is at risk of being infected with this ransomware. It is spread through malicious websites and file sharing sites that feature downloads that include the virus files along with the featured download, and as soon as it is installed on the computer, the United Kingdom Police Virus begins to alert the system settings and file registry. These changes block any programs and operations from working while the warning message is displayed. This lock screen cannot be closed or minimized and even if the user shuts down the power manually and restarts in safe mode the lock screen will automatically pop up. 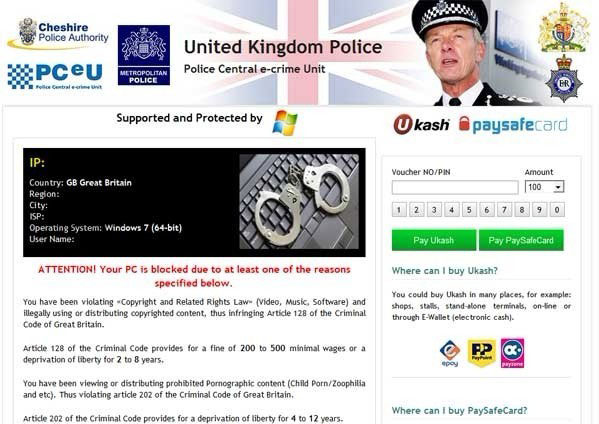 The message states that the user has 72 hours to pay the fine of 100 pounds by either a Ukash or Paysafecard, both of which are prepaid payment options that offer zero protection to the consumer, so once they realize that they have been scammed there is no way to recover or dispute the charge. This is why the hackers only accept these prepaid payment methods. The message also states that if the fine is not paid within the 72 hour window of time, that there will be additional fines and possible criminal charges as well. The message presented by the United Kingdom Police Virus looks like this:

Step B: Press Ctrl+Alt+Del keys to open the Task manager to stop the progress of United Kingdom Police Virus (Ukash Scam). Because the name will be changed fast, it will be show with different name.

By the way: It is fake UK Police virus scam. Manually remove United Kingdom Police Virus is a rather difficult work, if you are not a professional computer expert. We recommend you to get YooCare/ YooSecurity online service 24/7 in time. This is the real fastest and safe way to remove it.

The warning message of the United Kingdom Police Virus lists the IP address of the user, the location, the Internet service provider (ISP), and the operating system that the computer is running. This is a simple script that the hacker installs on the warning page, but many users feel that it is real because they are displaying the actual information of the user, and an inexperienced computer user will feel that the message is real since they have that information. This leads to many people rushing out to get the prepaid cards in order to pay the 100 pounds before the 72 hour deadline passes. Even if it is paid they will soon realize that they have been taken advantage of once the block is not removed.

Special tips: Spending a lot of time fixing your computer but failed? To avoid messing up your files and data in the system, please contact PC experts now to unlock your computer and remove United Kingdom Police Virus (Ukash Scam) safely and completely.