I can’t get rid of  a Trojan virus on my computer. Yesterday I was playing a game and then AVG said Trojan horse TDSS.CA was detected on my computer. However, AVG didn’t allow me to remove it. Is there any other way I can remove this virus completely?

Now thousands of AVG users are currently facing to the Trojan horse TDSS.CA virus detection and have no idea to remove it. It is a malicious Trojan dropper which can add malicious or potentially unwanted software to your computer without your permission. Users always get infected with this virus from  free software, games and media players that means it gets installed automatically while the users download some unsafe resources.

Although a Trojan does not replicate like a Worm, it installs a backdoor which allows remote, surreptitious access to infected systems. Once it is running in your PC, it can be used by remote attackers to upload and install further malicious or potentially unwanted software on the system. The virus is able to escape most antivirus detection because the running process is a valid Windows component. However, if users have installed AVG on the infected PC, it can be used to detect this stubborn virus. Though AVG can detect Trojan horse TDSS.CA Virus, you still cannot feel relax because it doesn’t allow you to remove the virus at all. Every time when you attempt to delete this Trojan, you only get two options which are “Protect me” and “Ignore threat.” Neither of them are working to remove this threat from the computer.

As malicious as other Trojan viruses, it can gather your confidential information such as password, credit card details, revenue details and others without your knowledge and then transfer to attackers for illegal use. Worse still, it may monitor web-browsing activity of the user and redirect users to all kinds of ad sites against their wills. Considering a Trojan horse is extremely dangerous because it can be used to record personal information on your computer and communicate it to a remote hacker, it is important to remove this Trojan manually from your computer as soon as possible.

Note: Manual Removal requires expertise and it is for advanced users, if you don’t have much experience in dealing with redirect virus. Contact YooSecurity Online PC Experts for removal assistance. 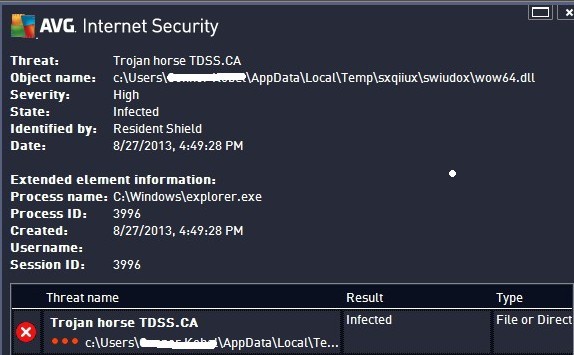 Virus Infected Symptoms Are Listed Below:

– This virus can escape from most antivirus protection and get itself installed on computers with Windows OS.
– It can cause constant stuck or even blue screens on the infected computers.
– Victims can experience constant security pop ups on the computers which may not truly represent the status of the PCs.
– Certain malware or spyware may be prompted by these fake security pop ups which will end up scamming money.
– Sensitive data like privacy can also be stolen by cyber criminals.

Step A: Open Windows Task Manager to end process related to the redirect. To do that, press Ctrl+Alt+Del keys at the same time to pull up Window Task Manager; go to Processes tab on top and scroll down the list to find.

Step D: Delete all these associated files and registry entries with this Trojan horse TDSS.CA virus in Registry Editor as below:

Trojan horse TDSS.CA is a highly dangerous Trojan that opens up firewalls and collects confidential information such as personal information and financial information. It has an ability to download and run other malware on the compromised computer. Most computers get infected with spyware because the user downloads something from the internet. They are either bundled with useful applications or users are tricked into downloading them. Trojans are most likely to be installed alongside freeware applications so that it’s so important to be careful whenever you want to install anything. When it is installed, it performs hazardous tasks on your computer such as disable your security tool, freeze or crash your computer system, open an entry point to let remote attack access your computer etc. To sum up, it endangers the privacy of computer users that should be removed as soon as possible.

Note: Have tried many methods but failed to get rid of Trojan horse TDSS.CA Virus? To avoid any mistakes, Please contact YooSecurity Online Experts in time to save your computer.