Today, a window popped up telling me that there were many threats in my computer. It told me to buy System Care Antivirus to remove the threats. But I have already purchased other anti-virus, so I didn’t do that. But it popped up to blocked most of my other programs. Now I can’t open almost every program. I tried to restart my computer but it’s still there. How can I remove this malware? Do you have the same problem? Here is what you need:

System Care Antivirus is classified as a rogue malware as it displays false information in order to trick you into purchasing the program. The interface of it looks like legit, friendly and helpful. In fact, it absolutely plays a role of villain. System Care Antivirus is a virus indeed which hides on nasty malicious websites or in bundled downloads, camouflaged as fake video codecs or spam email attachments. With a charming and fashionable name, lots of PC users have been deceived into downloading and installing this fake thing. Almost all of them thought it was a very powerful anti-spyware. It widely spread all over the world in 2013. It’s similar to some other fake anti-virus.

If you install this System Care Fake Antivirus in your computer, you will see that it looks like very similar to that famous anti-software such as AVG, MSE and Norton. Form operating panel to settings and GUI, it gives users a strong message: System Care Antivirus is professional anti-software. However, you may never think that it does the same thing as a virus. To control and damage your computer is its final goal. To cheat you into paying money is its final purpose. On the other hand, after this malware has been installed into your computer, it will try every means to scare you. In usual, this Fake malware may pretend to start a so called scan. Then it will report you that in your system32 folder or somewhere else, a very dangerous Trojan has been detected. If you don’t remove this virus, your computer will be in very bad condition. It will also tell you that the only anti-virus which can remove this Trojan virus is System Care Antivirus. But I may remind you so called detected Trojan is even not in your computer. The message is totally made up by this fake thing. The purpose is to persuade you into using this fake anti-virus to “protect” your computer. Of course, when you really want to use it to kill that so called Trojan, it will warn you that the version of System Care Antivirus at present is just a trial one. You have to purchase its full version before you can use it. Many users can be easily cheated as they may worry their computers. But that is conspiracy of this fake malware virus.

You might never consider that uninstalling System Care Antivirus becomes so hard. Actually, once you installed this malware in your computer, it means your real anti-virus would be a waste product since the fake stuff would disable its functions. And never let it run again. It will control your computer without your permission as if it is the owner of the computer. You may be not able to use some legitimate programs in your computer anymore. They will all be blocked by System Care Antivirus. So you can’t use any anti-virus to remove this fake thing. Even you can’t remove it from control panel. The only feasible way is to remove it manually with expert skills. Never delay, you’d better get this stuff off your computer as soon as quickly. 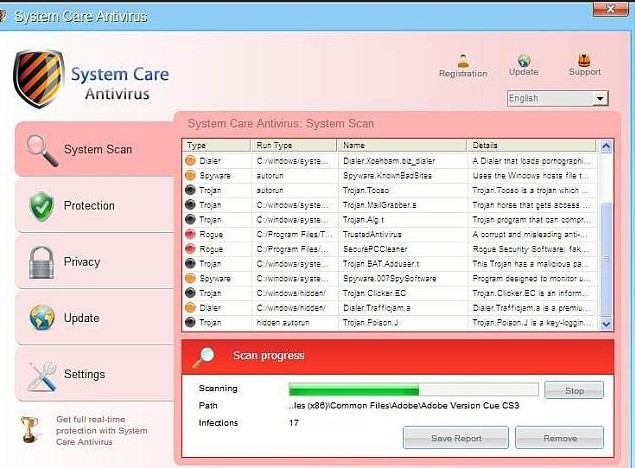 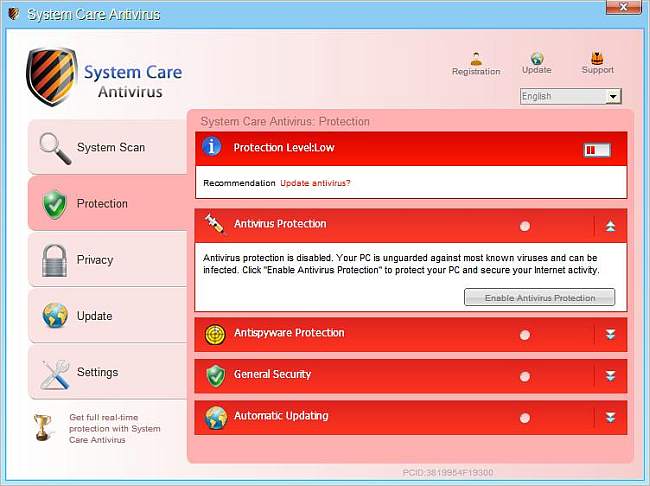 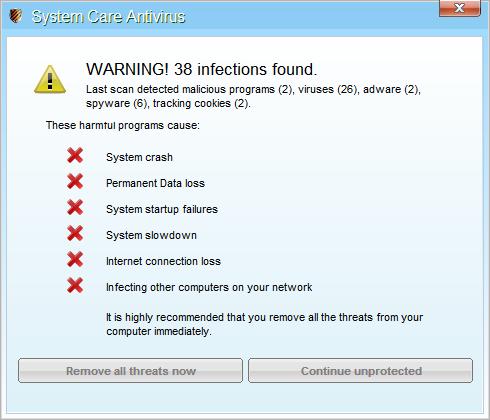 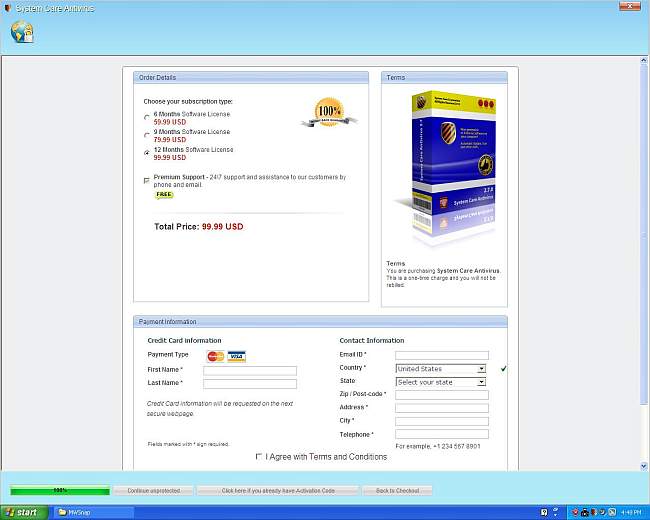 A. Your formal anti-virus programs will be replaced by System Care Antivirus.

Step 3: Press Ctrl+Alt+Del keys to open the Task manager to stop the progress of System Care Antivirus. Because the name will be changed fast, it will be displayed with different names with random letters.

Step 4: Delete all the files related to System Care Antivirus

Login to profile in which you are getting System Care Antivirus Fake…
Go to my computer
Then press ALT button once
Go to tools on menu bar
Goth select Folder options…
Click on view tab
Select Show hidden files, folders, and drives
Click OK button

Kindly remind: Don’t think that this notorious System Care Antivirus will leave your computer as time goes by. And be aware that this fake malware cannot even provide your PC any protection. What it can give to you is only harm and damage. Don’t waste even a penny on it. When you realize what it is one day, you will be very remorseful. Never believe those so called free software! Don’t download to install those stuffs in your computer. They can not remove the System Care Antivirus for you, but bring you much more other virus such as ransomware, scam virus even fake things. You may not be aware that those so called free software can be another cheater, which will make you gain just more loss. Please don’t take a chance to have a try. It’s nonsense. There is no free lunch! If you really can’t remove it yourself, please find an expert for assistance. This is the best choice.

Anyway: To contact an expert such as YooCare/YooSecurity for professional service will make you at ease if you really don’t know how to remove the System Care Antivirus fake thing: