Computer attacked by Internet Police Department virus all of a sudden? Have you also been accused of violating certain laws because of your online activities? Are you being scared and threatened by this sudden block page to pay a certain amount of fine in order to unlock the PC? What will happen if people don’t pay? Is there any illegal trouble involved with this Internet Police Department ransomware? How can one safely unlock PC from this unwanted pop up?

Internet Police Department Virus – How to Unlock PC From Scam

Internet Police Department virus can be categorized as ransomware which has been reported by many PC users all around the world attacking their PCs with all means. This PC problem isn’t new to lots of people especially in these days. Computer users find it very threatening and aggressive whenever they get such blocks on their computers. With a deceitful appearance, it has successfully got lots of PC users to pay the requested fine ranging from $100 to $500. But the truth is, it has nothing to do with the real police or other authorized organizations. By taking advantages of the authorities of these organizations, this ransomware can get as many computer users to pay as possible. Instead of sending the requested fine to the police or national account hoping to get their PCs unlocked from this Internet Police Department virus, these PC users have helped cyber criminals benefit somehow. Hence, it is very necessary for many PC users to do some researches online before making any payment to such block message.

There are many members from this computer ransomware group. The well-known FBI MoneyPak virus which attacks PC users from the United States at first then spreads its targets to other countries around the word; and the nasty PCeU (Police Central e-crime Unit) virus that puts European computer users through lots of troubles. With the ability to distribute on the Internet through malicious web sites and freeware, they usually can attack PC users from outside of the targeted zones later on. Because this ransomware can cause so much trouble on the compromised computers, removing Internet Police Department virus is an urgent task to complete when computers are under the attack of this virus. But most importantly, computer users should realize that paying the requested fine does not help unlock PCs or get rid of the locking screens but will help cyber criminals who create this kind of PC trouble benefit.

As mentioned above, this computer ransomware is distributed on the Internet to attack PCs from different locations. There are two major ways for this Internet Police Department virus to distribute. For one, it can hide under malicious web sites and links. When computer users log on these places online, they will have the possibilities to be attacked by this virus. For another, this ransomware can be spread by using the technique called bundling. To be more specific, it can bundle with freeware or spam email attachments. It will be able to download into the targeted systems when PC users install these unknown programs. All in all, the install of this ransomware doesn’t need permission from PC users. That’s also why victims of this Internet Police Department virus often feel shocked and scared when they first see the block message. PC users usually don’t aware of any evidence when being targeted by this ransomware. And because of illegal issues are involved, they normally will rush to the payment part hoping to get their PCs unlocked and get themselves out of any illegal troubles in the future. Again, paying the requested fine won’t be able to help you unlock your PC from this fake pop up warning message. The computer screen will remain blocked even after the payment is submitted within the limited time period.

Suggestions: To unlock computer safely from this Internet Police Department virus, a manual removal is suggested. Contact YooSecurity Online PC Experts now for assistance if you are not a computer expert and don’t want to make things worse on the computer.

1. The Australian version asking a fine of AUD $100 via Ukash vouchers: 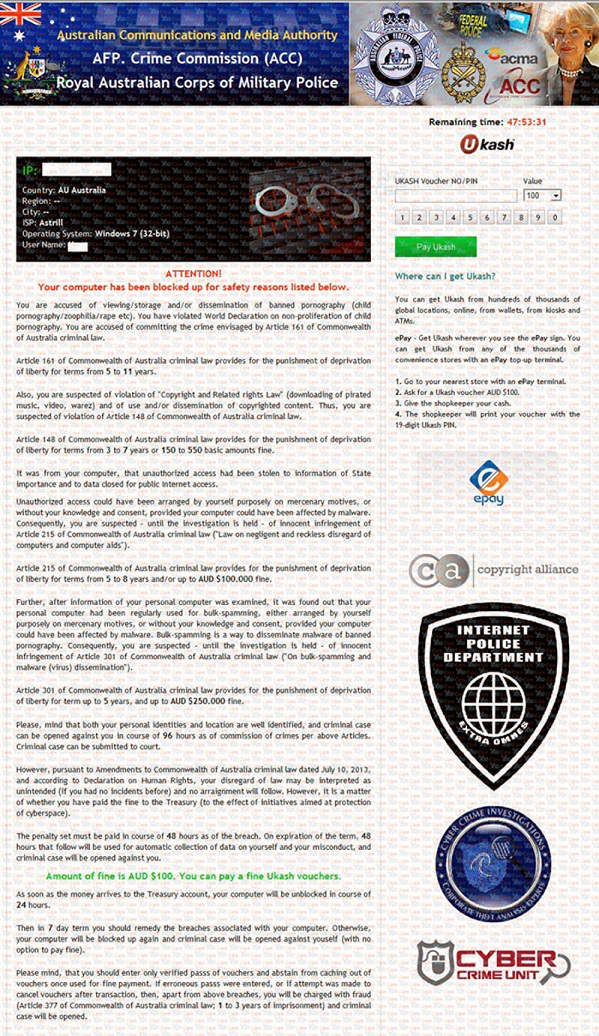 2. Another Australian version saying “Your Computer has been locked”: 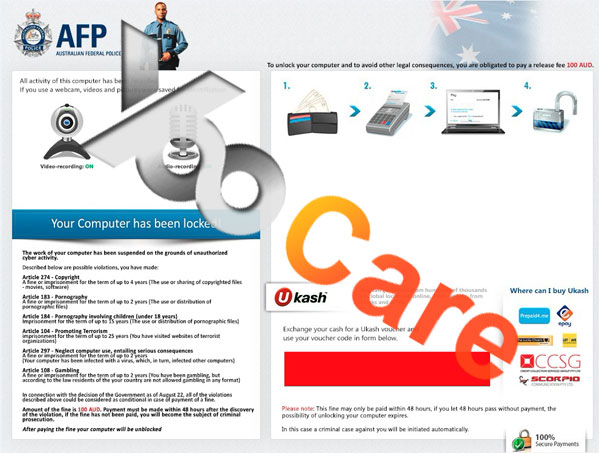 3. The U.K. version requesting victims to pay through Ukash or PaySafeCard: 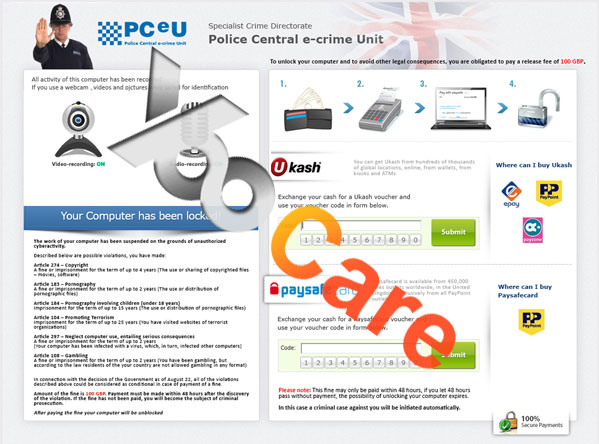 When computer is under the attack of this Internet Police Department ransomware, it will be completely blocked by similar messages from the above screen shots. This ransomware can set itself as a startup program and automatically launch when the computer is turned on. Within seconds or minutes, computer will be totally blocked by such fake police warning messages accusing you of violating the laws of the country mostly watching or distributing banned pornography online. And to get your PC unlocked and get yourself out of further troubles, an amount of fine will be requested by this block screen. Generally, to make it more real and legit, Internet Police Department virus will provide personal information on its screen including IP address, location, operating system, user name and even captured images as the webcam has been automatically turned on. Payment will be due within the next 24 or 48 hours with a count-down time table. When victims of this ransomware pay the fine, their PCs will remain being locked the same way as before. Now they are already being scammed by cyber criminals!

Circumstances when computers are unlocked after the payment is submitted happen. However, the virus remains inside the system waiting for its second chance to pop up and scam you again. Manual removal is suggested here as a better solution that can guarantee a complete removal of ransomware. Below are some basic steps on how to do it. Expertise will be required during the manual removal process:

Step 2: Press Ctrl+Alt+Delete at the same time to open the Windows Task Manager; go to Processes tab on top; then End processes associated with Internet Police Department virus or processes not belonging to system.

Internet Police Department ransomware is a very popular computer problem in these days. It has attacked computer users from all over the world with different versions and appearances. Usually, antivirus applications will be failed to prevent such virus from attacking the computers. Hence, PC users often feel confused when they are attacked by the ransomware even if they have been protected well by antivirus programs. Cyber criminals are believed to be combined to this ransomware because they can scam innocent PC users via this threatening block screen. It is upsetting but yet understandable that PC users will pay the requested fine trying to get their PCs unlocked because the virus screen appears to be authorized and legit. And when a PC is under the attack of this Internet Police Department virus, there will be a full screen of this fake police message preventing the user from accessing his/her computer. This nasty program can launch itself automatically whenever PC’s on. There isn’t usually enough time for PC users to think or react and they will be blocked all of a sudden. Personal information will be listed on the blocking screen as well as the regulations you have violated according to the ransomware. And if the fine cannot be made within limited time, you are also threatened to face further illegal troubles. However, no matter how legit and authorized this virus looks, it’s not trusted. Unlock PC from Internet Police Department ransomware should be achieved ASAP to prevent potential damage from happening to the computers.

Notice: Still cannot unlock PC from this annoying police message? Please contact YooSecurity Experts now to get help on a complete removal so that any potential damage can be prevented from happening.