How to Remove XP Antivirus 2014

Oh my goodness! What happen to my computer? Is that crashed? Because except XP Antivirus 2014, no other program works, I could not turn on word, all my explorers are out of run, my PC is totally useless. And what’s worse, whatever I try to open any program, it only gets me a pop-up window which tells me the program is infected. I mean seriously? This computer, it was fine yesterday, but now it becomes a useless machine? Yeah right, I have been used this PC for 7 or 8 years already, I got to admit it acts not so good as the year goes by. However I just randomly use it for working or reading some email and news, pardon me for my old school thought, I’m just an old man, I’m reminiscent, so I treat it as an old friend, I will not forsake my body until it is “dead”. Beside I get used to use XP OS since the first day I have my own computer, unless XP OS is out of market，otherwise I will not use any other OS. But for now though, it seems the rainy day is coming, my old friend is out of use. I am not sure if it is the matter of XP Antivirus 2014 or not. Actually, I have my own Antivirus program, I used it for a while and it never told me anything wrong before, and it is coincidence I download XP Antivirus 2014, I just thought it might be authoritative from its name, right now it asks me to buy its full version program so I could use my PC again. What should I do now?

XP Antivirus 2014 is a rogue anti-spyware program which is now very rampant on the internet. It was designed by cyber criminals to intimidate PC users into believing their computers have been infected with numerous malware infections and gain access to their credit card information, it  tricks users in order to make money from them. Rogue antivirus program is very common in the internet. I believe most of people have seen many rogue antivirus programs consciously or unconsciously. It’s normal you didn’t remember when you setup XP Antivirus 2014 after you saw it already on your computer, that’s because it’s good at disguising, it can spread, through unfair distribution methods. Various Trojans that look like a valid software (for example, a software that is needed to view an online video) can install this unwanted rogue antivirus to your computer, that’s why there still have many innocent users fall for cyber criminal’s line. They might consider this kind of antivirus program actually can do them a favor, help them discover these problems early, but the truth is, it turns out to be totally useless and even harmful. The most typical is, it will scan your computer without your allowance and detect at least several infected files which are completely nonsense .With fake scan results, false security warnings showing on the screen, it recommends you to purchase a full version of XP Antivirus 2014. Some people will actually buy the so-called service, and guess what, although the name and interface of XP Antivirus 2014 may appear trustworthy, XP Antivirus 2014 will not secure or fix your computer at all.

XP Antivirus 2014  was used Trojans to infiltrate a random computer, after installation, it will pop out each time you turn on the computer or be configured to start every time you try to launch a program on your computer. Once started it will launch fictitious system scans and display fake warning messages. If you attempt to remove these infections, though, it will prompt you to first purchase the program. The reason XP Antivirus 2014 creates false PC scan results is to frighten you into thinking your computer is corrupted with malware. However, don’t believe everything it tells, it’s only a trick but nothing, the security alerts are fake and should be ignored. This fake antivirus also frights innocent users in case of being removed, it will shut programs down by telling you they are all infected, XP Antivirus 2014 will hijack your web browser so that you cannot visit web sites. 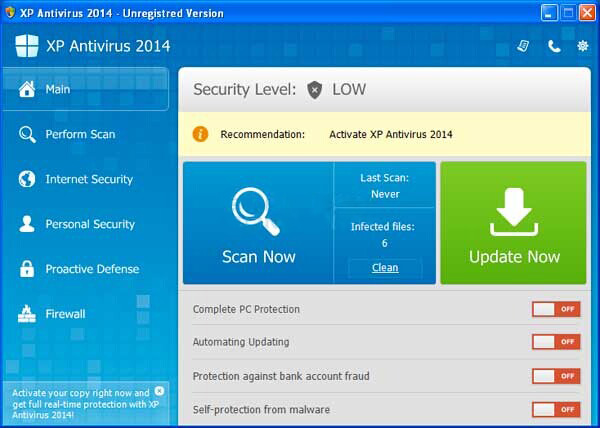 System Hijack!
System security threat was detected. Viruses and/or spyware may be damaging your system now. Prevent infection and data loss or stealing by running a free security scan.
XP Antivirus 2014 has blocked a program from accessing the internet
This program is infected with Trojan-BNK.Win32.Keylogger.gen
Private data can be stolen by third parties, including credit card details and passwords.

All this whole nine yard was created to scare you into thinking your computer has a security problem beyond doubt. Please do not purchase this program.

The Properties of Infection

Your computer will be infected by XP Antivirus 2014 if you see those traits. Please contact YooSecurity Online Experts for manual removal guide.

Step 2: Find Ctrl, Alt, and Delete these 3 keys and then press them together to open task manager to end the process related to Windows Internet WatchDog, the name of the process of it is random.

Then try to find it, highlight it and choose Remove.

Don’t be fooled by XP Antivirus 2014, once it was installed in your computer, otherwise cyber criminals will take advantage of your info. and data, and not just XP Antivirus 2014, if other kind of security programs happen to you, so you’d better keep an eye on it. Taking preventive measures in the first place would be a good way to avoid this kind of rogue program happening to your computer. Always pay close attention when seeing the pop-ups about system security, which could be a fake antivirus program. Fortunately, at the moment, manual removal still can be the most effective way to get rid of this kind of fake anti-spyware program or other similar kinds of rogue programs from computer. When things like this happen to you, please do not get scared by this false warning.  Manual removal will be the best way to get rid of the XP Antivirus 2014.