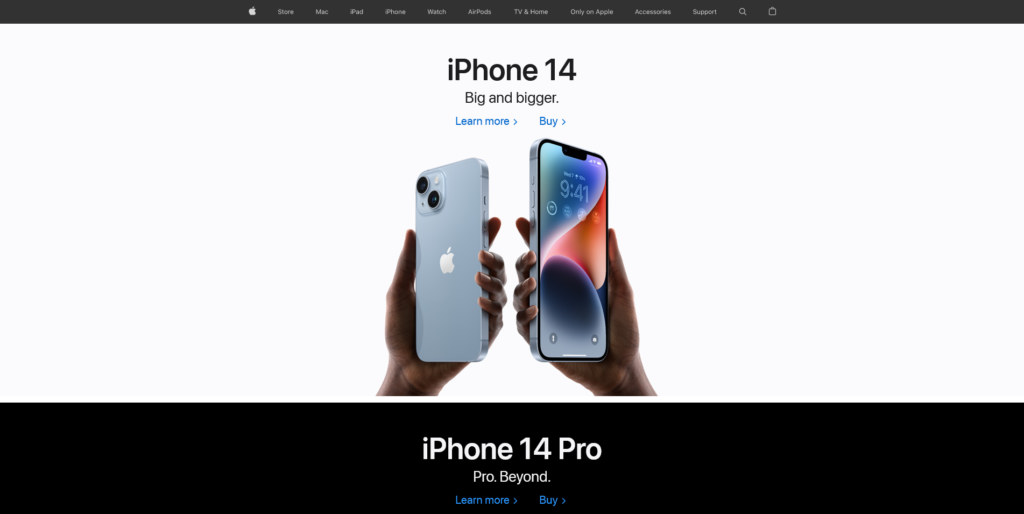 With the official debut of the iPhone 14 series and the new Apple Watch, before getting the new device, I believe many people have many details and questions about Apple’s new products. On the eve of the official release, the minority also has the opportunity to experience several new products in advance, for everyone is more concerned about the color, appearance, weight, new features and other issues, we have also sorted out after a short experience, through this article to share with you.

iPhone 14 series
In terms of appearance, dark purple, as the new color of this year’s flagship iPhone, has attracted a lot of attention. From the actual point of view, the dark purple iPhone 14 Pro series is in most cases darker than the visual effect of the rendering in Apple’s official website, and the visual effect of light purple or blue-black will be presented under different angles of light; The redesigned deep space black is also much darker than the graphite color of the iPhone 13 Pro series, more like a real black iPhone.

For users who like a large-screen experience and have high requirements for lightness, the iPhone 14 Plus will be a good choice. In terms of comparing the previous model, the iPhone 14 Pro Max and the iPhone 13 Pro Max I am using have almost no difference in grip, after all, the former only adds 2 grams of weight compared to the latter.

In addition to color matching, the Dynamic Island on the iPhone 14 Pro series is the biggest change in the new product. According to Apple, “Smart Island” occupies 31% of the screen area compared with the “bangs” design of the previous generation of products; From the actual experience, when the “Spirit Island” does not have a running function, the screen look and feel will not be too abrupt.

Since almost no third-party apps have officially launched the adapted version, we can only simply experience the relevant functions through the system application. As demonstrated on Apple’s official website, when playing music or turning on the timer, the display area of “Flexible Island” will become longer horizontally, telling you that the music is playing or the timer is running through a dynamic waveform graph or countdown number.

As for the new all-weather display function added to the iPhone 14 Pro series, as introduced on Apple’s official website, the screen will dim after locking, and the information on the time, date and widget will be displayed on the screen.

Due to the limitation of experience time and venue, we were not able to experience the performance of the new iPhone in terms of photography, more about the introduction and experience of the iPhone 14 series models, you can pay attention to our follow-up more reports.

However, I thought that wearing the Apple Watch Ultra daily would be very abrupt, but after the actual experience, I felt that it was not so exaggerated, although the wearing feeling was still a bit uncomfortable.

In terms of weight, although Apple has repeatedly emphasized the lightness of the Apple Watch at the conference, it is a little surprising after it is really started. With the 45mm stainless steel version of Apple Watch Series 8 (silicone strap) as a reference, Apple Watch Ultra feels significantly lighter, which is more obvious in the model with the alpine loop strap and the wild diameter loop strap, and the marine strap model is slightly heavier than the other two versions.

In terms of features, both Apple Series 8 and Apple Watch Ultra have added a temperature sensor to support the measurement of body temperature data.

In fact, before the Apple Watch, another wearable device, Oura Ring, has supported body temperature measurement and menstrual prediction functions, and the implementation principle is similar to that of Apple Watch, so interested friends can read Oura’s official article on temperature measurement and menstrual prediction to further understand the relevant principles.

In terms of dial, Apple Watch Ultra’s exclusive pathfinder dial also supports night mode, and you can switch back and forth by rotating the digital crown. In actual experience, the black dial background with the display effect of the bright red dial content, daily use is also a good choice.

In addition to the iPhone and Apple Watch, we also simply experienced the second-generation AirPods Pro, but because there is no first-generation product as a comparison, there will be more detailed content release for the performance of battery life and noise reduction ability.

The appearance of the second-generation AirPods Pro has hardly changed compared to the first-generation product, and the only change on the headphones is that the sensor under the earpiece has moved to the top of the earpiece; In terms of charging case, side lanyard holes and bottom speakers have been added.

As in previous years, Apple has launched some new color accessories with new products, such as lilac iPhone 14 MagSafe case, pine green MagSafe card bag, etc. may wish to see the actual effect of these accessories through the photos we take.

Other news
According to 9to5Mac, since about last week, Apple’s official website in the United States has begun to change the word “laptop” in all copywriting from “Notebook” to “Laptop”, including online store product pages, articles in the product support knowledge base, etc. “Laptop” is also the term used by most PC manufacturers to describe notebook products. In addition, the upcoming macOS Ventura has undergone a similar tweak, the default device name for the out-of-the-box setting is no longer “someone’s MacBook Air (or Pro)”, but “someone’s laptop”. FYI: If you like to uninstall any unwanted app from your macOS devices, you can use the best app uninstaller to get rid of the apps without any hassle.